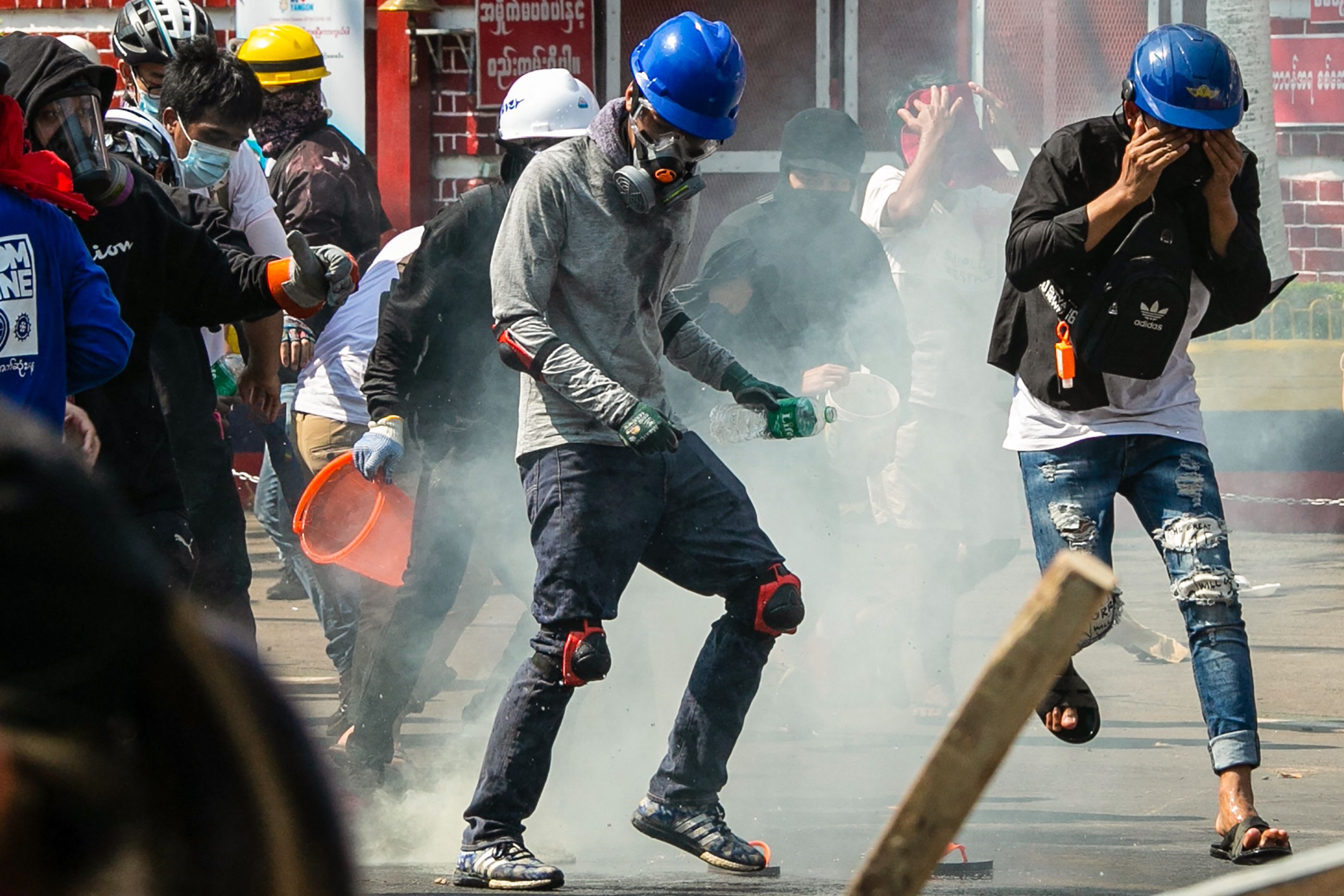 The UN Human Rights Office says it has received “credible information” that a crackdown Sunday on anti-coup protesters in Myanmar has left at least 18 people dead and over 30 wounded.
“Deaths reportedly occurred as a result of live ammunition fired into crowds in Yangon, Dawei, Mandalay, Myeik, Bago and Pokokku,” it said in a statement, referring to several cities in Myanmar. “Tear gas was also reportedly used in various locations as well as flash-bang and stun grenades.”
“We strongly condemn the escalating violence against protests in Myanmar and call on the military to immediately halt the use of force against peaceful protesters,” its spokesperson Ravina Shamdasani was quoted saying.
It would be the highest single-day death toll among protesters who are demanding that the elected government of Aung San Suu Kyi be restored to power after being ousted by a Feb. 1 coup.
Security forces in Myanmar made mass arrests and used lethal force on Sunday as they intensified their efforts to break up protests a month after the military staged a coup. At least four people were reportedly killed.
There were reports of gunfire as police in Yangon, the country’s biggest city, fired tear gas and water cannons while trying to clear the streets of demonstrators demanding that the elected government of Aung San Suu Kyi be restored to power. Photos of shell casings from live ammunition used in assault rifles were posted on social media.
Reports on social media identified by name one young man believed to have been killed in Yangon. His body was shown in photos and videos lying on a sidewalk until other protesters were able to carry him away.
A violent crackdown also occurred in Dawei, a much smaller city in southeastern Myanmar, where local media reported that at least three people were killed during a protest march. The fatalities could not immediately be independently confirmed, though photos posted on social media showed a wounded man in the care of medical personnel, and later laid out in a bed under a blanket with flowers placed on top.
Confirming reports of protesters’ deaths has been difficult amid the chaos and general lack of news from official sources.
Prior to Sunday, there had been eight confirmed reports of killings linked to the army’s takeover, according to the independent Assistance Association of Political Prisoners.
The Feb. 1 coup reversed years of slow progress toward democracy after five decades of military rule. Suu Kyi’s National League for Democracy party would have been installed for a second five-year term in office, but the army blocked Parliament from convening and detained her and President Win Myint, as well as other top members of Suu Kyi’s government.
Sunday’s violence erupted in the early morning when medical students were marching in Yangon’s streets near the Hledan Center intersection, which has become the gathering point for protesters who then fan out to other parts of the city.

Videos and photos showed protesters running away as police charged at them, and residents setting up makeshift roadblocks to slow their advance. Some protesters managed to throw tear gas cannisters back at police. Nearby, residents were pleading with police to release those they picked up from the street and shoved into police trucks to be taken away. Dozens or more were believed to have been detained.
Demonstrators regrouped later Sunday and security forces continued to chase them in several neighborhoods.

There was no immediate word on Yangon casualties. Sounds of gunfire could be heard in the streets and there were what appeared to be smoke grenades thrown into the crowds.
“The Myanmar security forces’ clear escalation in use of lethal force in multiple towns and cities across the country in response to mostly peaceful anti-coup protesters is outrageous and unacceptable, and must be immediately halted,” said Phil Robertson, deputy Asia director for New York-based Human Rights Watch. “Live ammunition should not be used to control or disperse protests and lethal force can only be used to protect life or prevent serious injury.”
“The world is watching the actions of the Myanmar military junta, and will hold them accountable,” he said.
On Saturday, security forces began employing rougher tactics, taking preemptive actions to break up protests and making scores, if not hundreds, of arrests. Greater numbers of soldiers have also joined police. Many of those detained were taken to Insein Prison in Yangon’s northern outskirts, historically notorious for holding political prisoners.
According to the Assistance Association of Political Prisoners, as of Saturday, 854 people had been arrested, charged or sentenced at one point in relation to the coup, and 771 were being detained or sought for arrest. The group said that while it had documented 75 new arrests, it understood that hundreds of other people were also picked up Saturday in Yangon and elsewhere.
MRTV, a Myanmar state-run television channel, broadcast an announcement Saturday night from the Foreign Ministry that the country’s ambassador to the United Nations had been fired because he had abused his power and misbehaved by failing to follow the instructions of the government and “betraying” it.
Ambassador Kyaw Moe Tun had declared in an emotional speech Friday at the UN General Assembly in New York that he represented Suu Kyi’s “civilian government elected by the people” and supported the struggle against military rule.
He urged all countries to issue public statements strongly condemning the coup, and to refuse to recognize the military regime. He also called for stronger international measures to stop violence by security forces against peaceful demonstrators.

Iran to enrich uranium to 60%, highest level ever

CK One Shock … the most popular fragrance of all