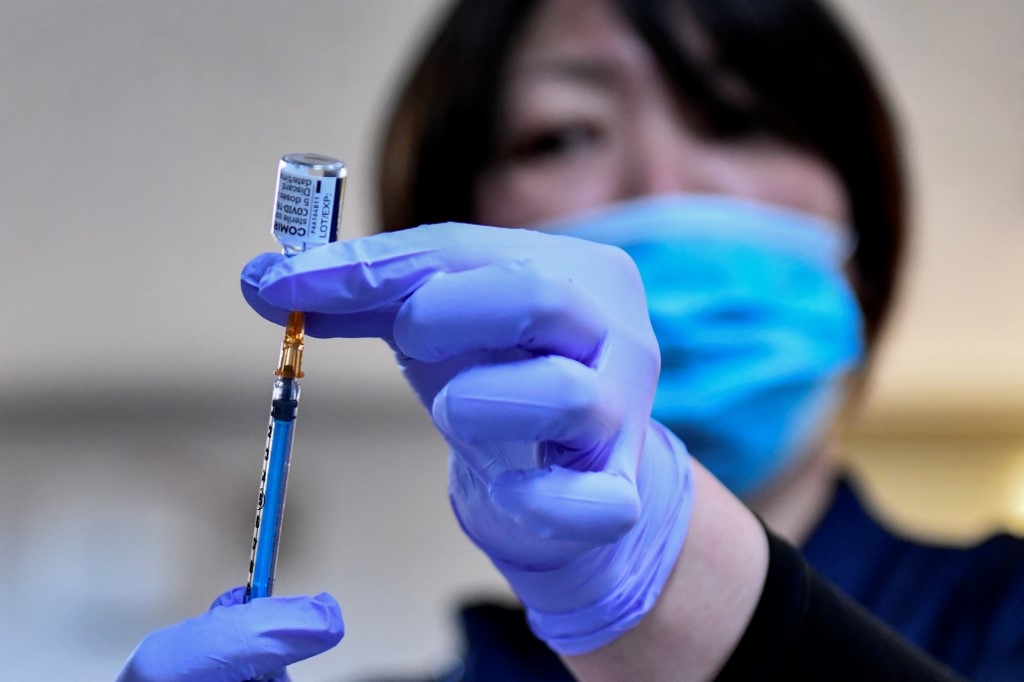 TOKYO: Japan began vaccinating health care workers against the coronavirus on Wednesday, rolling out a cautious inoculation program with just over five months until the Tokyo 2020 Olympics.
Japan has so far approved only the Pfizer/BioNTech vaccine, and started administering the first shots at a Tokyo hospital on Wednesday morning.
Tokyo Medical Center director Kazuhiro Araki became the first person in Japan to receive the vaccine outside of clinical trials.
“The vaccine plays an important role in anti-coronavirus measures. So I thought as a director I should take the lead and get the shot,” he told reporters afterwards.
“I don’t like getting shots very much,” he admitted.
“But it wasn’t painful, so it was good. I was relieved.”
Nurse Rino Yoshida, wearing a face mask and visor, was calm and relaxed as she was vaccinated.
“The mortality rate and the risk of illness have gone down overseas, so hopefully vaccinations starting in Japan can change the situation here,” she told public broadcaster NHK.
Speaking afterwards, vice health minister Hiroshi Yamamoto told reporters he was “really moved” to witness the first shots being administered.
“I want to thank from the bottom of my heart the health care professionals who are working on the coronavirus frontline,” he added.
Twelve staff at the facility are being vaccinated on Wednesday, in front of the media, with a total of 800 in line to receive shots – including administrative personnel.
Japan is planning to initially vaccinate 40,000 health care workers across the country, and will study the effects of the two-dose vaccine on 20,000 of them.

Doses will be administered three weeks apart, with the people in the study group asked to keep daily records of any side effects or reactions, local media said.
The country then hopes to vaccinate around 3.7 million health workers from March – with jabs for around 36 million people aged 65 or older starting from April.
The program will extend later to those with pre-existing conditions or working with the elderly, and eventually to the general population, but there has been little detail yet on the timing for that.
Prime Minister Yoshihide Suga said Wednesday takes “seriously the fact that it has taken time” for Japan to start vaccinations compared to some other countries.
“But today we start, and it is the government’s responsibility to prepare the environment so that many Japanese people are vaccinated.”
Japan’s minister overseeing vaccinations Taro Kono told media on Tuesday there was no timeline yet for vaccinating the broader population.
He also acknowledged he had “no idea” how much of the population will be vaccinated by this summer’s postponed Olympics.
“I’m not really taking the Olympics into my consideration. I need to roll out the vaccine as I get the supply from Europe.”
Japan has reached deals with three major pharmaceutical firms to buy enough COVID-19 vaccine doses for its population of 126 million.
But so far only the Pfizer jab has been authorized, though AstraZeneca has submitted a request for approval.
Japan’s approval process has been slower than in some other countries because it has required additional domestic trials.
But the country has also seen a much more limited outbreak compared with hard-hit countries such as Britain or the United States.
It has recorded nearly 418,000 infections and just over 7,000 deaths so far.
A spike in cases late last year prompted the government to impose a state of emergency, currently in place in Tokyo and several other parts of the country until March 7.
The measure is limited, and primarily asks restaurants and bars to close by 8 p.m., with people urged but not ordered to stay at home.
Japan’s virus response is being closely watched with doubts still hanging over the feasibility of the Olympics, due to open July 23.
Organizers and officials have outlined virus countermeasures they say will keep the Games safe even without requiring participants to be vaccinated or quarantined on arrival.