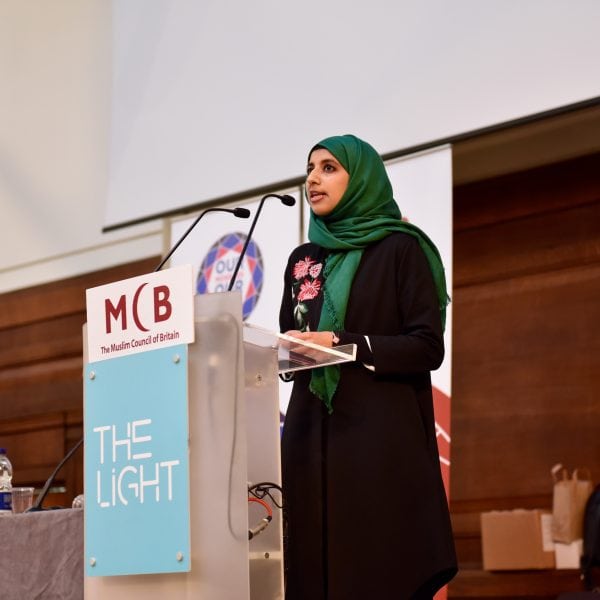 The Muslim Council of Britain (MCB) has elected Zara Mohammed as the first female secretary-general in its history.
The 29-year-old Scot replaced Harun Khan following the end of his four-year term, after a poll of the MCB’s affiliate organizations.
Mohammed won 64 percent of the vote against her rival for the role, politician and Imam Ajmal Masroor.

I am truly honoured & blessed to be elected as the next Secretary-General of the @MuslimCouncil I hope to continue the great work of @harakha and the MCB team, I look forward to working with @HassanJoudi_ MCB DSG & our affiliates and non-affiliates for the common good #MCBAgm2021 https://t.co/1Idhvjsutz

Mohammed, who has a master’s degree in human rights law and is from Glasgow, had previously served as assistant secretary-general of the MCB.
“My vision is to continue to build a truly inclusive, diverse and representative body, one which is driven by the needs of British Muslims for the common good,” she said.
“Being elected as the first female secretary-general is quite an honor, and I hope it will inspire more women and young people to come forward to take on leadership roles. They are the future of this organization and our society,” she added.

“I think women sometimes hesitate to take on leadership roles, even though they are more than qualified to do so. It is really important to engage young people, engage more women and diversify the organization and the work we are doing.”
Mohammed said the changing roles of women and young people in the Muslim community in the UK come against the backdrop of the coronavirus pandemic, the disproportionate deprivation suffered by ethnic minorities during it, and “huge issues with Islamophobia” in Britain — all areas that the MCB has led the way in tackling, but that require further progress.

Khan welcomed the election of his successor, saying: “Zara being elected by a majority of our members demonstrates that they strongly believe in her ability to lead the organization as a young and fully capable woman.”
London Mayor Sadiq Khan, one of the UK’s most prominent Muslim politicians and the capital’s first Muslim leader, said: “I wish the very best of success to Zara Mohammed — may she continue to lead this organization to greater heights for the betterment of our communities across the country.”