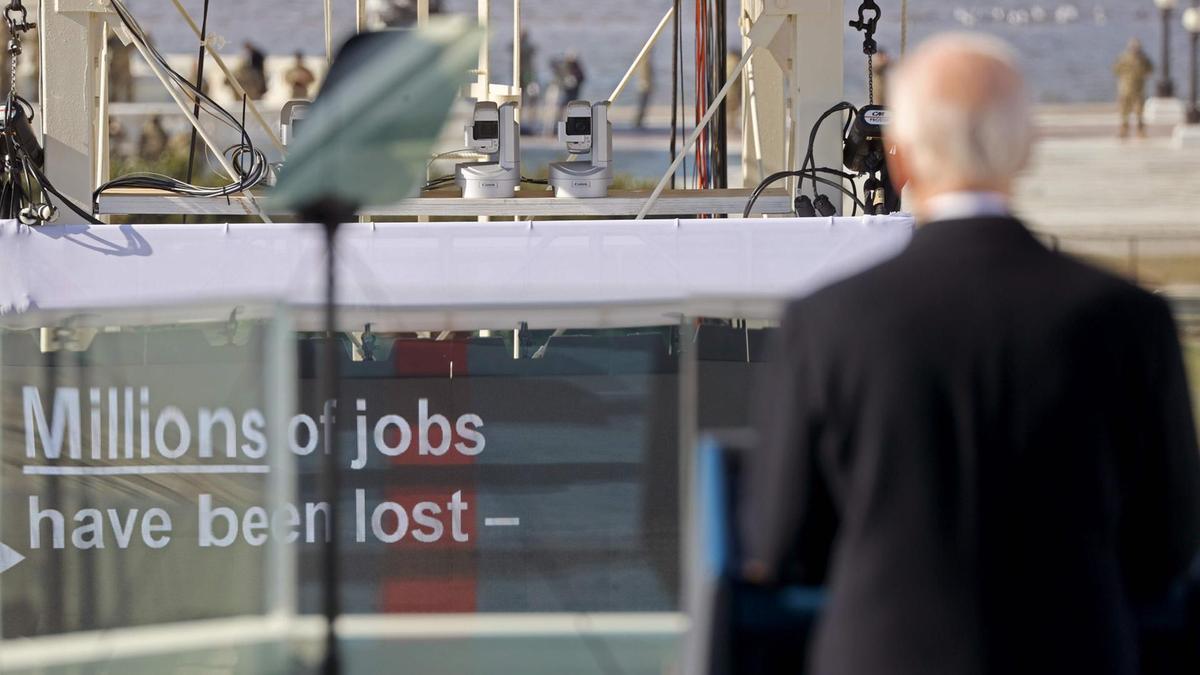 World leaders said they were looking forward to working with Joe Biden, the Democrat sworn in as US President on Wednesday after four turbulent years under Donald Trump.

The UAE President, Sheikh Khalifa, wished Mr Biden success and expressed hope that the countries would deepen their decades-long partnership in working together on challenges such as global health, climate change and violent extremism.

Sheikh Khalifa said the country's leadership had the privilege of working closely with Mr Biden during his many years in the Senate and as Barack Obam's vice president, state news agency Wam reported.

"It's time to bring back conviction and common sense and rejuvenate our EU-US relationship," Mr Michel said.

"We expect [the Biden administration] to return to law and to commitments and try in the next four years, if they can, to remove the stains of the past four years," Mr Rouhani said.

The Biden administration is looking to return the US back to the landmark Iran nuclear accord between Tehran and world powers, from which Mr Trump withdrew, provided Tehran returned to strict compliance.

"I look forward to working with you to further strengthen the US-Israel alliance, to continue expanding peace between Israel and the Arab world and to confront common challenges, chief among them the threat posed by Iran," Mr Netanyahu said in a video.

"Nato allies need to stand together to address the security consequences of the rise of China, the threat of terrorism, including in Afghanistan and Iraq, and a more assertive Russia."

Pope Francis urged Mr Biden to promote "reconciliation and peace" around the world.

"At a time when the grave crises facing our human family call for far-sighted and united responses, I pray that your decisions will be guided by a concern for building a society marked by authentic justice and freedom," the leader of the Roman Catholic Church said.

The US and Russia are to discuss extending the 2010 New Start nuclear weapons accord shortly after Mr Biden is sworn in.

This last remaining nuclear pact between the countries limits each side to 1,500 nuclear warheads and is set to expire on February 5.

President Frank-Walter Steinmeier of Germany, Europe's biggest economy, said he was "greatly relieved" Mr Biden was replacing Mr Trump as US president, calling it a "good day for democracy".

Germany looks forward "to knowing we again have the US at our side as an indispensable partner" in addressing "the coronavirus pandemic, climate change, security issues, arms control and disarmament, and many urgent conflicts around the world".

French President Emmanuel Macron tweeted: "Best wishes on this most significant day for the American people.

"We are together. We will be stronger to face the challenges of our time. Stronger to build our future. Stronger to protect our planet. Welcome back to the Paris Agreement."

Mr Macron was referring to the 2015 international accord committing all nations to cut carbon emissions to limit global warming, from which the US formally withdrew in November last year under Mr Trump.

British Prime Minister Boris Johnson, who has faced criticism over his close relationship with Mr Trump, said he was looking forward to "working closely" with Mr Biden.

"In our fight against Covid and across climate change, defence, security and in promoting and defending democracy, our goals are the same and our nations will work hand in hand to achieve them," Mr Johnson said.

Queen Elizabeth II sent a private message to Mr Biden before he was sworn in, Buckingham Palace said, without revealing the contents of the message.

"It is a day of history and hope and I look forward to forging ever closer ties between our two great nations."

Canadian Prime Minister Justin Trudeau said: "Our two countries are more than neighbours – we are close friends, partners and allies.

Mr Trudeau pledged Canada's co-operation in fighting the coronavirus pandemic, on climate action and on a sustainable economic recovery.

Indian Prime Minister Narendra Modi tweeted: "My warmest congratulations to Joe Biden on his assumption of office as president of the United States of America.

"I look forward to working with him to strengthen the India-US strategic partnership."

The leaders of the Saudi Arabia, Kuwait, Qatar and Bahrain also sent messages of congratulations.

Palestinian President Mahmoud Abbas said he was "impatient" to work with Mr Biden "for peace and stability in the region and in the world".