On his first full day as US president, Joe Biden will unveil his national Covid-19 strategy, which will address vaccinations, testing, and restrictions placed on schools and businesses.

Mr Biden plans to invoke the Defense Production Act to ramp up production of medical supplies and personal protective equipment.

Officials said Mr Biden would sign 10 executive orders and other directives on Thursday to jumpstart the national strategy to combat Covid-19, after the new US president warned during his inaugural speech the pandemic was entering its "deadliest period."

With Democrats in control of the House and the Senate, Covid relief measures could be cleared expeditiously, but debate remains about what should be included in the relief bill.

Within Mr Biden's $1.9 trillion relief bill is a proposal for Americans to immediately receive a $1,400 stimulus check. Quick approval of the checks would provide Democrats with an early victory at a time when US employment has nearly doubled since last year.

Earlier on Thursday, Mr Biden's chief medical advisor Dr Anthony Fauci said the US will rejoin the World Health Organisation and will aid in a global vaccine distribution plan.

"One year ago, to the day, the United States confirmed its first case of SARS-COV-2, in the State of Washington. Today, in my country and around the world, we have surpassed 90 million cases, a devastating number that continues to grow,” said Dr Fauci.

Mr Biden began his term as America’s 46th president on Wednesday with a call for unity in a country riven by political and racial divisions and a raft of executive actions. Mr Biden's first course of action as president will be to undo controversial policies implemented by his predecessor Donald Trump.

“Disagreement must not lead to disunion,” Mr Biden said in his inaugural address after taking the oath of office in front of the US Capitol exactly two weeks after Trump supporters stormed the building in an attempt to block certification of Mr Biden's election victory. 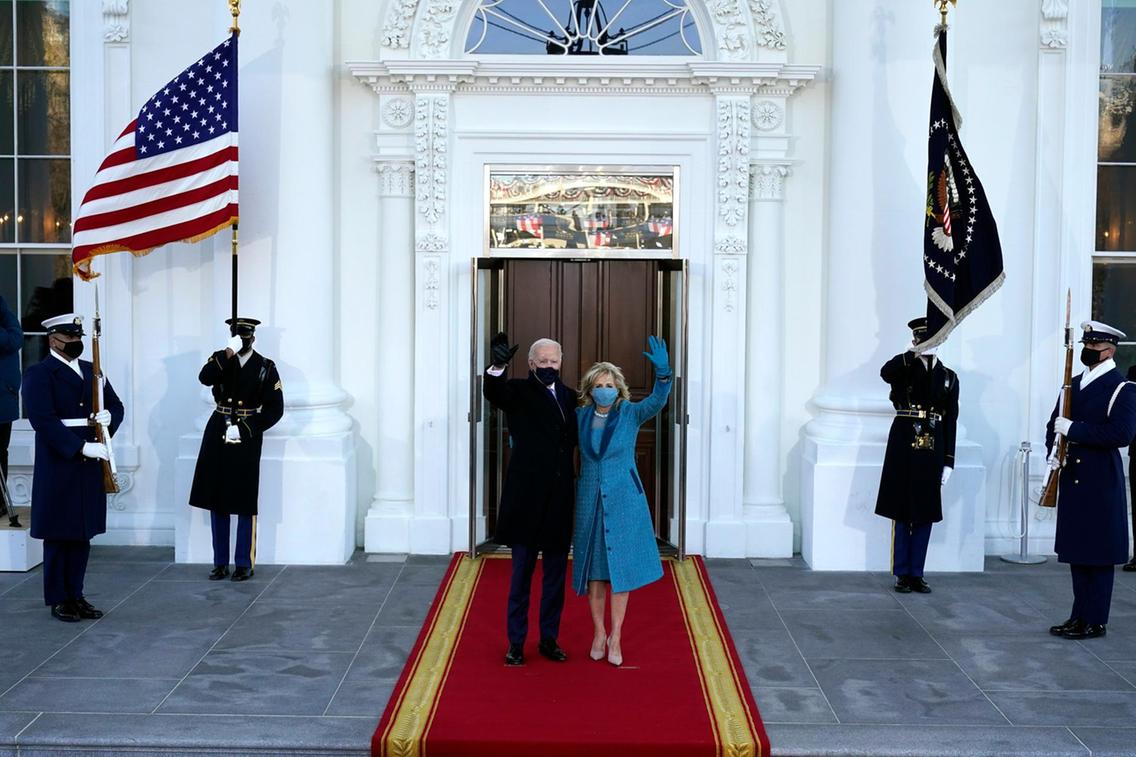 “We must end this uncivil war that pits red against blue, rural versus urban, conservative versus liberal,” he said.

Mr Biden ended his address by leading the attendees in a moment of silent prayer for the victims of the Covid-19 pandemic, one of the main challenges facing the new president.

The inauguration was held amid tight security in Washington, with more than 25,000 National Guard and 2,500 temporarily sworn in special marshals to ensure the event went off peacefully after the attack on the US Capitol.

Mr Trump was not present at the ceremony, attended by about 1,000 people rather than the hundreds of thousands who normally flock to the capital for the event. Former vice president Mike Pence attended, as did members of Congress and several past presidents, Republicans and Democrats.

Although Mr Trump shunned the inauguration ceremony and instead flew to his residence in Florida, he maintained a modern tradition by leaving his successor a letter in the desk of the Oval Office.

Mr Biden said Mr Trump had written him "a very generous letter", but declined to reveal its contents. "Because it was private, I will not talk about it until I talk to him, but it was generous."

Within hours of taking office, the new president signed a series of executive orders aimed at reversing decisions by his predecessor, including a decision to re-join the Paris climate accord, ending the ban on entry from mostly Muslim-majority countries and halting construction of the wall on the US-Mexico border.

World leaders said they were looking forward to working with Mr Biden, with the UAE President, Sheikh Khalifa, expressing hope that the countries would deepen their decades-long partnership in working together on challenges such as global health, climate change and violent extremism.

Sheikh Khalifa noted that the UAE leadership had worked closely with Mr Biden during his many years in the Senate and as Barack Obama's vice president, state news agency Wam reported.

President Frank-Walter Steinmeier of Germany, Europe's biggest economy, said he was "greatly relieved" Mr Biden was replacing Mr Trump as US president, calling it a "good day for democracy".

"It's time to bring back conviction and common sense and rejuvenate our EU-US relationship," Mr Michel said. 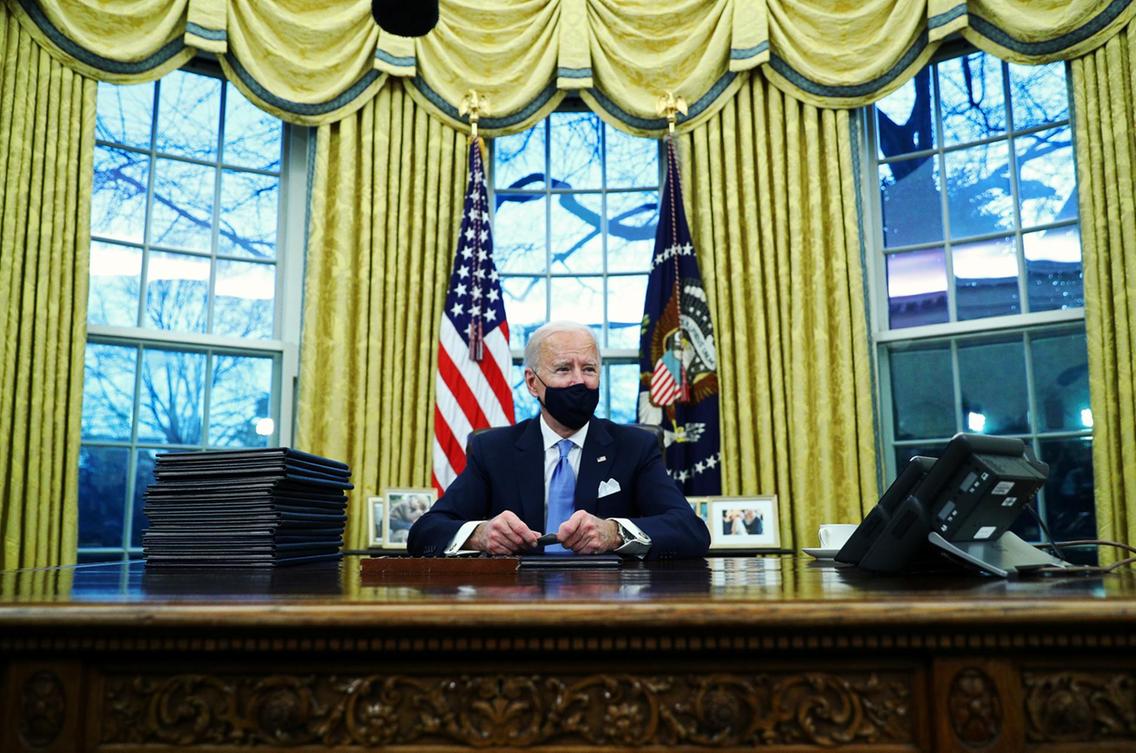 Iranian President Hassan Rouhani hailed the departure of Mr Trump, who withdrew the US from the 2015 Iran nuclear deal and imposed sanctions.

The Biden administration is looking to return the US to the nuclear accord between Tehran and world powers, provided Tehran returns to strict compliance.

"We expect [the Biden administration] to return to law and to commitments and try in the next four years, if they can, to remove the stains of the past four years," Mr Rouhani said.

White House spokeswoman Jen Psaki said in her first press briefing on Wednesday that Mr Biden would discuss a conditional US re-entry to the deal as part of his first round of phone calls with foreign leaders, including close American allies.

Mr Biden's first day in office ended with a fireworks display that lit up the sky behind the Washington Monument.

The president and first lady Jill Biden watched from a balcony in the White House on Wednesday night surrounded by their grandchildren.

While the inaugural events were scaled back because of the pandemic and security concerns in Washington, organisers created a celebratory atmosphere with live and recorded celebrity performances, ending with singer Katy Perry.

Vice President Harris and her husband, Doug Emhoff, watched the fireworks from the steps of the Washington Monument after a brief speech by Ms Harris.