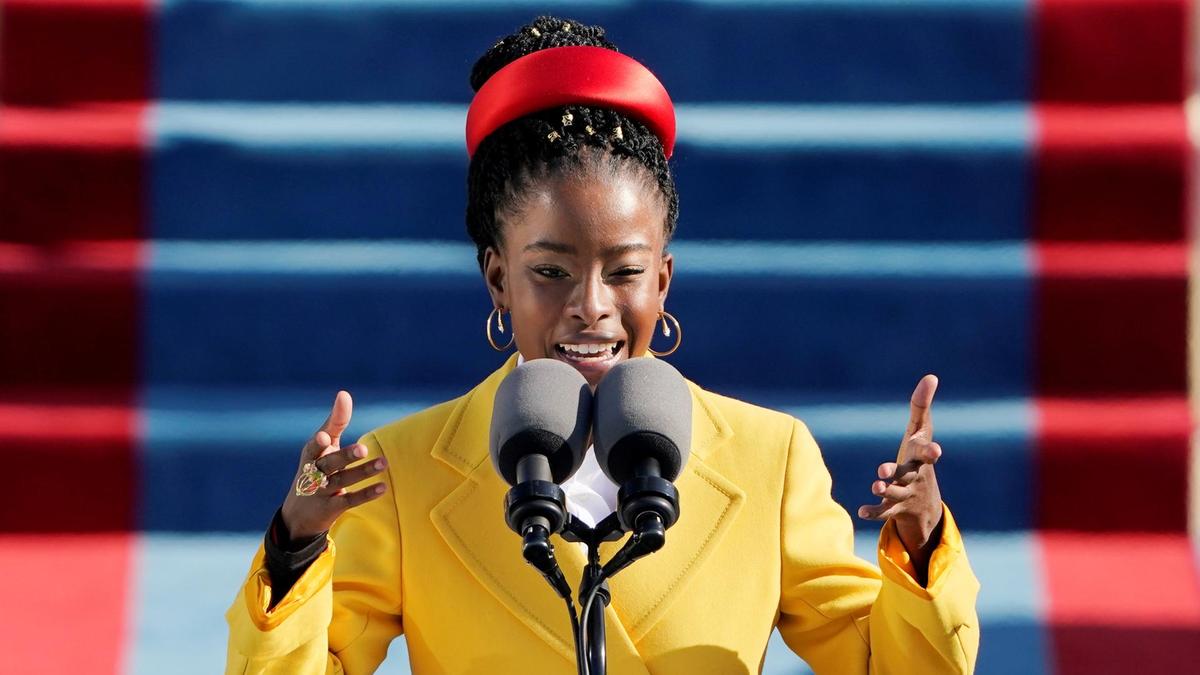 Amanda Gorman, 22, wore a bright yellow jacket and red headband as she delivered her inspiring original composition, The Hill We Climb, to hundreds gathered at the Capitol and millions watching at home.

On stage, the Los Angeles native marvelled at the opportunity, saying a "skinny black girl, descended from slaves and raised by a single mother can dream of becoming president, only to find herself reciting for one".

But she also added a dose of realism, referring to the Capitol riots in all but name.

"We’ve seen a force that would shatter our nation rather than share it, would destroy our country if it meant delaying democracy," she said.

"And this effort very nearly succeeded. But while democracy can be periodically delayed, It can never be permanently defeated."

Oratory may not have always come naturally to Ms Gorman, not that audiences around the world would have guessed on Wednesday. She told the Los Angeles Times she has struggled with a speech impediment, like Joe Biden himself, since childhood.

“I don’t look at my disability as a weakness,” she said. “It’s made me the performer that I am and the storyteller that I strive to be. When you have to teach yourself how to say sounds, when you have to be highly concerned about pronunciation, it gives you a certain awareness of sonics, of the auditory experience.”

She was chosen to follow in the footsteps of other famed poets, including Maya Angelou and Robert Frost, to deliver the inaugural poem after the new first lady Jill Biden recommended her, US outlets reported.

Her message of unity chimed with the theme of Mr Biden's inauguration ceremony.

“America is messy. It’s still in its early development of all that we can become. And I have to recognise that in the poem. I can’t ignore that or erase it. And so, I crafted an inaugural poem that recognises these scars and these wounds," she told the Los Angeles Times before the ceremony,

"Hopefully, it will move us towards healing them.”

Ms Gorman is known for her social commentary in poetic form. In 2017, she recited a composition called In This Place, which lays bare the trauma left by the Charlottesville's Unite the Right rally and the resistance critical to challenging racism and fascism. That same year she was named America's first Youth Poet Laureate.