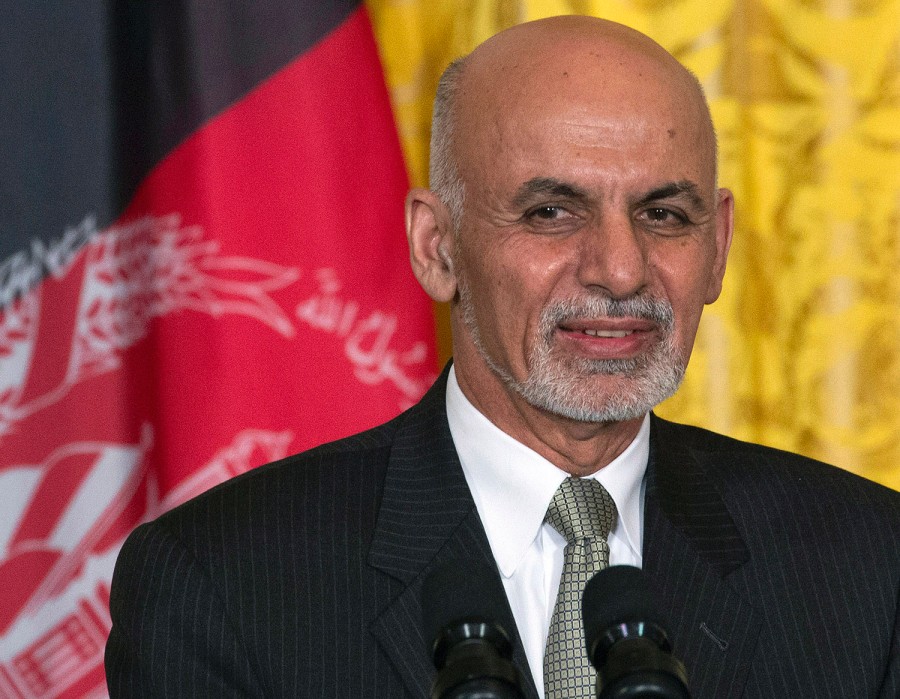 KABUL/ISLAMABAD: Afghanistan’s President Ashraf Ghani has said he is going to complete his term in office, amid rumors about the establishment of an interim government in the country as part of peace negotiations between Kabul and the Taliban that have resumed in Doha, Qatar.
Deliberations between the Afghan government and the Taliban, which started in September, have yielded little so far, but both parties made a breakthrough last year when they finally agreed on what to discuss in the next round of talks that began earlier this week and are expected to yield a power-sharing arrangement in Afghanistan.
“My basic goal is to be able to hand power, through the will of the people, to my elected successor,” Ghani, who started his second five-year term in office last year, told CNN in an interview on Friday.
“We’re not a type of society that the Taliban-type approach of the past can be imposed on us. That was the peace of the graveyard,” he said.
Ghani’s comments came as various reports citing government sources said that he had refused to meet with the US Special Representative for Afghanistan Reconciliation Zalmay Khalilzad in Kabul last week over the matter of forming a transitional government.
Ghani’s ties with Khalilzad, the architect of intra-Afghan talks in Doha, have soured lately as the US last year inked a peace deal with the Taliban, following secret talks that did not include the Afghan government.
Under pressure from the US, the Afghan president had to release thousands of Taliban prisoners last year, which he did reluctantly, and after months of delays agreed to send government-appointed representatives to face the Taliban at the negotiating table in Doha.
As part of the Washington-Taliban deal, US-led foreign troops are expected to leave Afghanistan by spring. Ghani and other top leaders of his government have urged US President-Elect Joe Biden to review the accord with the Taliban.
The Taliban, meanwhile, reject pushing for the interim government set-up in the country.
“I do not know who has spread the rumors about the interim government,” Taliban Spokesman Mohammed Naeem said on Saturday.
He added that the agenda of the resumed talks should be finalized by the two sides during Saturday discussions.
Afghan High Council for National Reconciliation Deputy Maulvi Atta ur Rahman Saleem said that they are ready to discuss “every issue” to quickly reach an agreement.

“We are ready to discuss every issue; no issue is a red line for us in the talks. We can quickly reach agreements on certain issues and can defer some less important ones until after we’ve had detailed discussions and made final decisions on key matters,” he told Arab News earlier this week.
He added that both sides will have to show some flexibility to take the peace process forward.
Afghan government negotiators are expected to push for a permanent cease-fire, as Taliban attacks have been on the rise, and to protect the existing system of governance, in place since the ouster of the Taliban in 2001 by a US-led invasion.
The Taliban, however, seem unlikely to agree to a cease-fire as they have refused to accept Pakistan’s appeal for a reduction in violence during a visit of their delegation to Islamabad last month.
Experts fear a peace agreement may not be reached any time soon.
“No side is going to win this war, which can last a few more years and take the lives of our youth, one by one,” Torek Farhadi, a former Afghan government adviser, .
“We might not like it, but less violence in Afghanistan will come from a coalition, possibly a loose organizational governance structure, with the Taliban,” he said, adding that “Ghani knows the Taliban don’t want him as their president nor as leader of an interim set-up.”