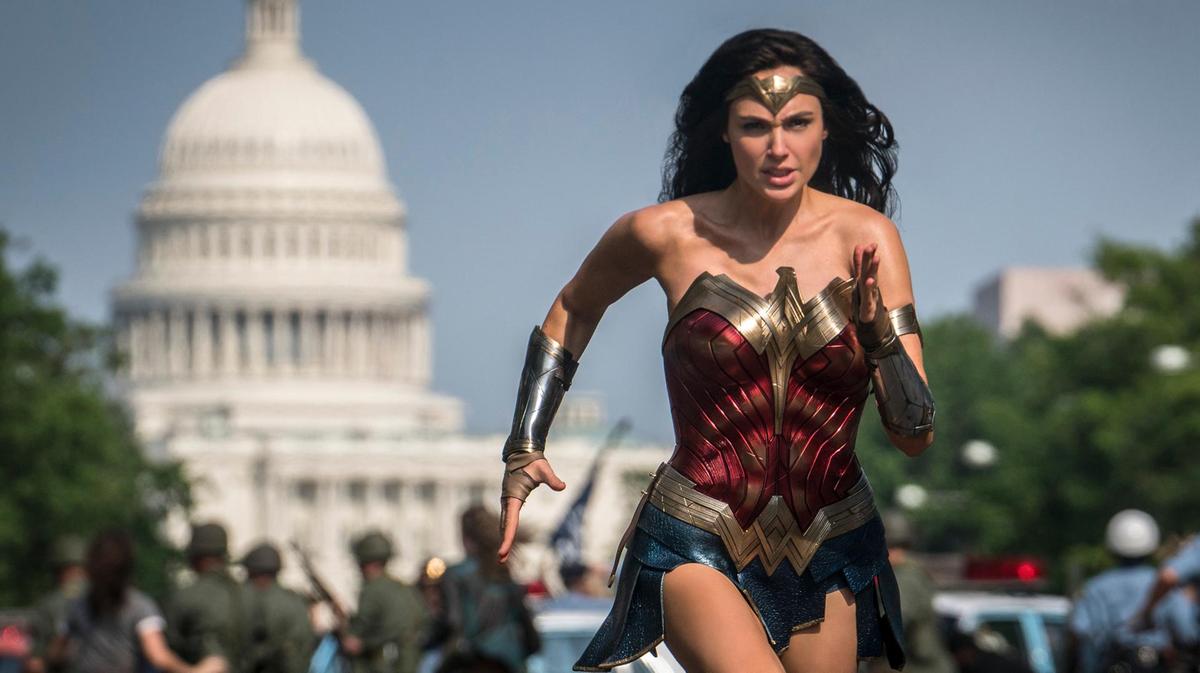 In a year of blockbuster cancellations, the arrival of Wonder Woman 1984 feels like a salve for anyone who has been craving big-screen Hollywood entertainment. It starts as it means to go on – a flashback to Diana’s childhood on Themyscira, where she competes in what looks like the Amazonian Olympics: running, diving, horse riding and archery. An exhilarating sequence, it’s exactly the sort of adrenalin-fuelled spectacle that 2020 has been missing.

Yet WW1984 is about far more than popcorn thrills. Ever since actress Gal Gadot first appeared as Wonder Woman for DC Comics in 2016’s Batman v Superman: Dawn of Justice, she’s always been a cut above her male counterparts. Her wit and brio seem far more appealing than the introspective brooding of Ben Affleck’s Caped Crusader and Henry Cavill’s Man of Steel, something that was confirmed in her first stand-alone outing, 2017’s Wonder Woman.

Directed by Patty Jenkins, that first film told the origin story of this ageless Amazonian warrior who finds her way to humanity and into the horrors of the First World War. “The first film was about the birth of Wonder Woman,” says Jenkins, speaking at a recent press conference, “[and] what Wonder Woman goes on to stand for in the world. She’s trying to teach everyone she encounters how to be their [best] self.”

Returning to direct WW1984, Jenkins tells her story unencumbered by all the necessary character set-up that a first film requires. Or as she puts it: “The last one was her discovery of humanity. Now, how does she live within humanity?” The action moves from 1918 to 1984 – with Wonder Woman’s earthly guise, Diana Prince, now living in the US, working at a museum. Her first love, pilot Steve Trevor (Chris Pine), is long gone. So is the rest of her team.

“She’s been very lonely, she doesn’t really want to engage and make new friends because then they’re gonna realise she doesn’t age, they’re gonna die and she has to let go,” says Gadot. “So she kind of isolated herself from the world. And her only goal is just to help and better mankind and be there for them and guide them and try to do good.” As worthy as this all makes it sound, WW1984 is anything but; the balance between action, adventure and humour is in perfect harmony.

Tapping into the retro thirst for all things Eighties, the film spins audiences back to the era of Reaganomics, oil wars and the threat of nuclear weapons. Again, though, Jenkins never lets it get too heavy. As Stranger Things has proved, this is a time period where costume designers – here, Lindy Hemming – can have a tremendous amount of fun. WW1984 captures the luminous colours and bouffant hair of the era without fetishising it.

Here, Diana is introduced to two major villains from DC lore – Barbara Minerva, aka Cheetah, and Maxwell Lord. Played by Kristen Wiig, Barbara is her nervy colleague, a gemologist who is seemingly as lonely as Diana. They bond, with Barbara enchanted by Diana’s cool confidence. Max Lord, played by Pedro Pascal, meanwhile, is the chief executive of Black Gold Co-operative, an oil company that’s on the verge of going bust – little more than a “Ponzi scheme” as one dissatisfied investor puts it.

The paths of all three cross at the museum when Max is given a private tour and gets his hands on the Dreamstone rock. It acts like the proverbial wishing well, granting one wish to those who hold it. Soon, Max’s wells are overflowing with oil and Barbara transforms from a mousy nobody into an urbane sophisticate. But after a disturbing encounter with a drunken man, where she beats him senseless, she realises her real desire – strength and power – and the “apex predator” Cheetah is born.

You might say WW1984 is a classic cautionary tale: be careful what you wish for. Even Diana is drawn to the Dreamstone, wishing for the return of her lover, Steve. Indeed, the pilot is reincarnated in the body of another man – allowing Diana another brief sliver of happiness. One of the pleasures of WW1984 is to see Pine’s Steve adjusting to this modern world, where jumbo jets fly overhead and children breakdance in the street.

The tender relationship between Diana and Steve was one of the highlights of the first film, and that continues unabated here. “The idea is of the man playing the proverbial fish out of water … that’s usually played by the woman, and we [used] those tropes in the first film,” says Pine, referring to the way Diana was befuddled by the world she entered. Here, it’s Steve who is the stranger in a strange land and Diana the sophisticated guide.

Among the highlights is a sojourn to Egypt, where Max is trying to oust various sheikhs from power, and Wonder Woman becomes embroiled in a highway chase involving juggernauts.

Famed for playing the helmeted warrior in the Star Wars spin-off The Mandalorian, Pascal is superb. He invests a humanity into Max – a father who is desperate to prove to his young boy that he’s a success – that’s usually absent from most big villains.

Likewise, Wiig ditches her comedic work for something broad and brave – right to the point where she and Diana go into battle against each other, an athletic, agile fight that took inspiration from the dancers of Cirque du Soleil. Again, Cheetah may have “worse intentions”, says Jenkins, than beating her former friend, but WW1984 is not a film about world domination. It’s about the power of a person in the face of a cruel world.

Gadot’s Wonder Woman, of course, will return – in Zack Snyder’s recut four-hour Justice League for starters. But you suspect nothing will be as fun as her two collaborations with Jenkins. “The chemistry is just there,” the actress admits, and it shows. Even running at 151 minutes, WW1984 simply flies by – offering up a rush of endorphins like few other films have managed this year.

Netflix’s new show ‘The Big Day’ is far from reality