Health benefits of hot water vs cold water: What do extreme temperatures actually do to your body? 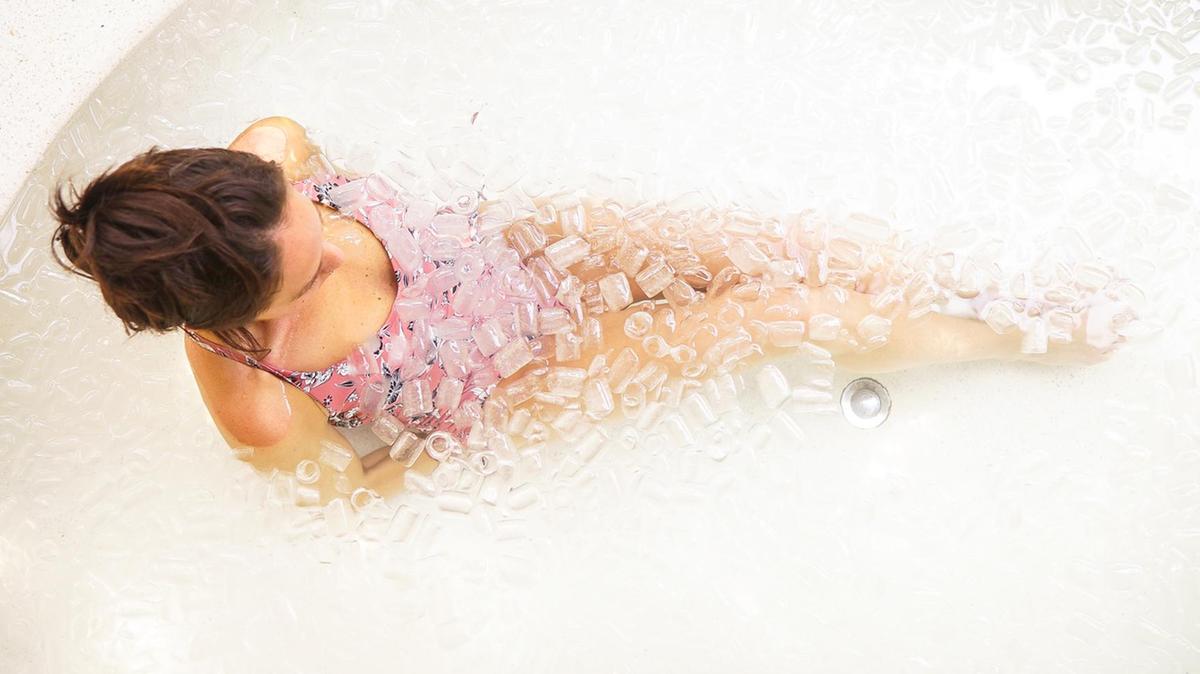 “It hits you like a thousand knives stabbing you all over your body.” It’s this Titanic line that, most unhelpfully, springs to mind as I eye the ice-filled tub before me. As someone who had up until this moment taken ice therapy to mean Ben & Jerry’s after a break-up, this is the only reference my brain calls upon as I stretch and breathe before entering the water.

“Remember, shoulders in the water and exhale as you get in,” Walid Aboulnaga instructs. The adventurer and founder of Nafas Journeys continues: “Oh, and if you’re struggling, hold your breath – that will soon distract you from the pain.”

Plunged into the icy depths, I am not overcome by the sensation of tiny icicles piercing every inch of my skin, nor the pain I had mentally prepared for. Rather, it’s the sensation of my breath being swept away from me in a second that overwhelms me. The shock of being unable to breathe, that innate ability that we are all born with, sends my heart galloping as it tries to escape my ice-immersed chest. Although the initial reactions of my fellow bathers differed on the day, I am not the only one to respond in such a way.

“My first step into an ice bath literally took my breath away,” Aboulnaga tells me.

Despite the shock to the system, I volunteered for round two, as did everyone in attendance. But why put ourselves through it? Because, like healing heat therapy, practices such as ice baths and cold showers are growing in popularity in the contemporary wellness space. They may make up two extremes, yet both hot and cold therapy can be beneficial.

In recent years, Dutch athlete Wim Hof has raised the status – both in terms of visibility and viability – of cold therapy. If you’re not up to speed, the so-called Iceman has broken 20-plus records in the realm of cold exposure. He has run a half marathon barefoot on ice, climbed Mount Kilimanjaro wearing only a pair of shorts and shoes, swum great lengths in icy waters and immersed himself in an ice bath for an uninterrupted 113 minutes.

But it wasn’t just Hof’s record-breaking feats that appealed to followers such as Aboulnaga, who led the workshop I attended at The Retreat Palm Dubai MGallery by Sofitel, using the patented Wim Hof Method – a combination of breathwork, meditation and cold therapy. Hof preaches that cold immersion can heal mind and body, and that by using specialised breathing techniques and meditations, we can withstand extreme temperatures and even control our body’s response to them.

“I was fascinated by how he was able to inject himself with multiple different viruses and bacteria, and through the power of breath and meditation have close to no symptoms,” says Aboulnaga.

In 2011, a scientist researching the Iceman dubbed it "remarkable" that he demonstrated the ability to control his own immune response when being administered endotoxin, a bacteria similar to E Coli. In 2014, these results were reproduced in a larger group of subjects after they followed Hof’s teachings.

Read More: For permanent youth .. How to make a nutmeg mask

In 2018, professor of psychiatry and behavioural neurosciences at Wayne State University, Vaibhav Diwadkar, said: “The practice of the Wim Hof Method may lead to tonic changes in autonomous brain mechanisms, a speculation that has implications for managing medical conditions ranging from diseases of the immune system to more intriguing psychiatric conditions such as mood and anxiety disorders.”

Evidently, the Iceman is on to something.

Gabriel Halmagyi, grand spa manager at Rome Cavalieri, A Waldorf Astoria Hotel, in Italy says of Hof’s preferred method of healing: “Cold helps the body to recover, balancing its temperature, which helps tone both muscle and skin, fights inflammation and provides a sensation of feeling refreshed, light and invigorated.”

While Hof favours headline-making extremes, temperature has long been used as a source of healing. “Cold bathing is a practice known for its health benefits for hundreds of years, from Japan to ancient Greece to Egyptian cultures,” Aboulnaga says. One of the oldest surviving medical texts, The Edwin Smith Surgical Papyrus, (which dates back to 1600 BC), makes numerous references to the use of cold as therapy.

These days, it is used by physiotherapists in rehabilitation, athletes after training, by pharmaceutical companies in creams and gels and, of course, spa therapists with infrared and laser therapy, as well as more traditional treatments. 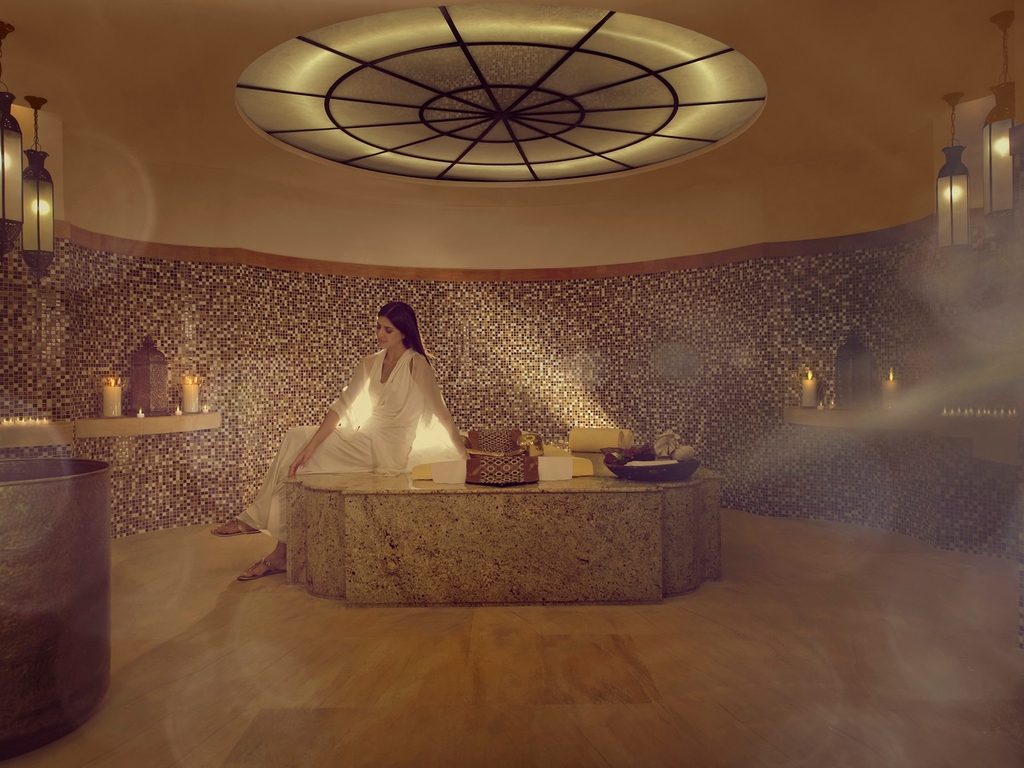 Saunas and steam rooms, meanwhile, have been the bread and butter of spas throughout history. This is no surprise considering the word itself – derived from the Belgian town of Spa famed for its thermal baths dating back to the 8th century – references a location where mineral-rich spring water, often heated, is used to take medicinal baths.

When it comes to modern thermal healing, Tampere in Finland is the unrivalled sauna capital of the world and across the country at large, it's common to have a sauna in your home or to use the hot spot (pun fully intended) as a meeting space. But it’s about more than relaxation.

Heat, says Soni Rawat, spa supervisor at Anantara Al Jabal Al Akhdar Resort, “can be especially beneficial for people suffering from chronic pain”. This may explain why the Finnish applaud the sauna for its ability to alleviate stress.

Dry heat, in which humidity is increased by adding water to rocks to create steam, helps to “release endorphins, a feel-good chemical that reduces the effects of stress on the body, which can relax you enough to sleep better”, says Galina Antoniuk, spa director at Anantara The Palm Dubai Resort. As the sauna aids blood circulation, this, in turn, better delivers oxygen and nutrients to the muscle tissue.

The steam room, on the other hand, is all about the humidity. “Heated at 48 degrees, this is an environment of almost 100 per cent humidity,” says Halmagyi. He explains that the vapours help to open airways, improve breathing, and even fight asthma and allergies. “This increases the local metabolic process, resulting in weight loss, detoxification, and the alleviation of aches and pains.”

Both saunas and steam rooms can help to improve the immune system, he adds, as by “increasing body temperature, the body can better fight against colds and flu”, detailing that this is why your temperature increases when you are fighting an infection.

The benefits are backed up by science, too. A 2018 study carried out (unsurprisingly) by researchers in Finland demonstrated that enjoying a sauna had a similar effect on the body as 30 minutes of medium intensity exercise.

As the science behind the power of cold therapy becomes better known, more spas and wellness centres are bringing the two elements together. “Something that heat and cold therapies have in common is that they are both used to reduce muscle spasms and alleviate pain,” says Rawat.

Physical benefits aside, both extremes can alter your mental state, too. While heat releases endorphins and enables the body to relax, the cold teaches our brain about endurance; instead of sending you to sleep, cold showers will send energy levels soaring, leaving you feeling positive and alert.

As of yet, eager as we may be to harness the healing power of water at all its temperatures, it’s a lot easier to convince most people to relax in a room filled with steam than it is to ask them to jump into an icy bath.

But, as Aboulnaga puts it, the temporary moment of pain is worth the long-term gain. “I believe ice therapy will teach people to trust in themselves, and to explore the huge potential of the human mind and body to help itself. It takes focus to stay in the cold water. Work on your willpower and watch how this carries over into other important areas in your life.” Round three, then.