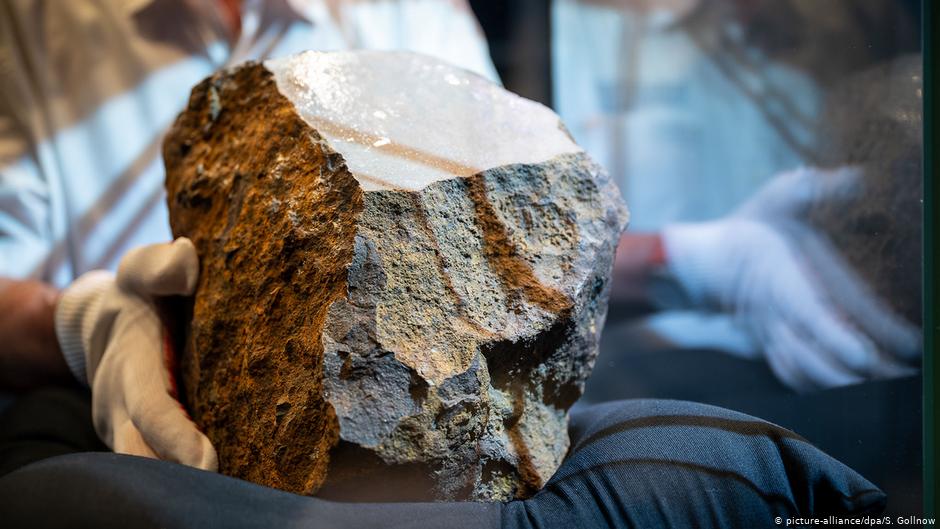 A gift from heaven, it is not a story from the world of fiction but a real reality. If the Indonesian Yushuahuta-Gallung was working in front of his house in the town of Kolang, northern Indonesia, when a meteorite weighing more than two kilograms fell and penetrated the roof to settle inside the house, according to the British newspaper "The Sun".
“It was as if a tree had fallen on us,” said Joshua Huta-galung ٬ He added that the whole house shook. Since the "meteor" was still very hot, Joshua's wife tried to push the stone away from the small hole created by the collision with a shovel.

Read More: The crazy adventure video .. He jumped from the plane without a parachute

The German "Focus" website reported that Joshua was making a coffin outside his home when the stone fell on his house. The coffin maker becomes a millionaire in no time, as the price of a "meteorite" is estimated at more than one million five hundred thousand euros.

Experts estimate the age of the "meteor" at about 4 billion and 5 hundred million years and includes elements that could provide rare information about the origin of life.

Joshua sold the stone for an amount equivalent to his income for about 30 years. The buyer of the meteorite is an expert from Arizona, USA. "I have had three children and have always wished to have a baby, and I think that the fall of the stone is a sign of good luck that I will have a baby," said Joshua, who plans to build a church in his village.

It is worth noting that Africa is home to the second largest meteorite gathering after Antarctica, and searching for celestial rocks has become a hobby for the local people in Morocco, including those who take it as a profession. Among the most important meteorites to be found is the Tissint Al Merikhi meteorite, which fell on Morocco on July 18, 2011 and was purchased by the Natural History Museum in London.

Because of a rare "mutation" ... an entire family was born without fingerprints