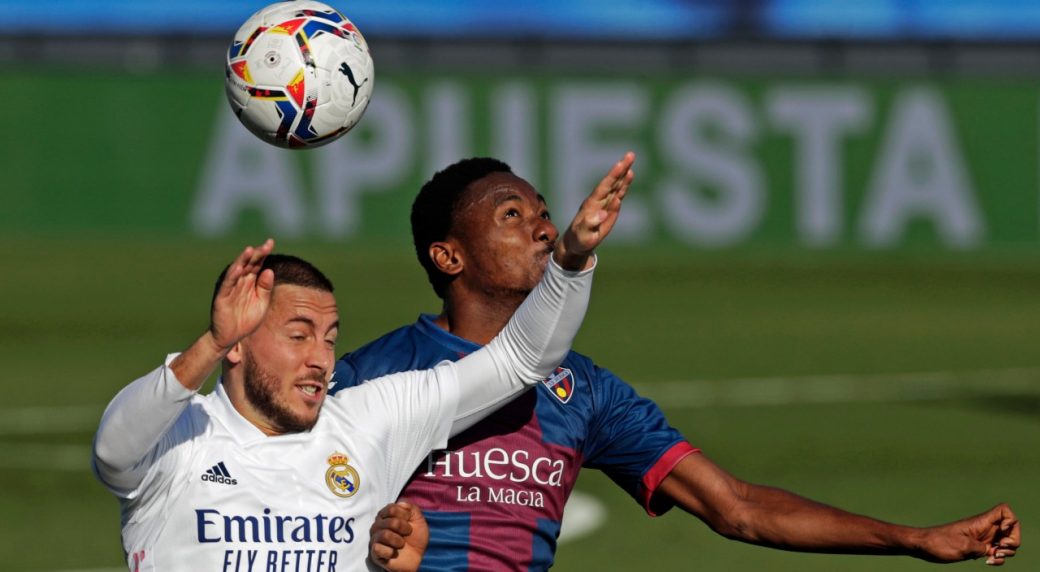 Eden Hazard scored his first goal in over a year for Real Madrid in his first start of the season to lead a 4-1 win over Huesca in the Spanish league on Saturday.

Hazard took advantage of the starting nod by blasting home a strike to set Madrid on its way to ending a two-game home losing streak.

Karim Benzema scored two more for Madrid and set up another goal.

Ravaged by a series of injuries, including a foot fracture, Hazard has struggled since making his club-record 100 million euros (then $113 million) move from Chelsea in 2019. His only previous goal for Zinedine Zidane’s side was on Oct. 5, 2019.

The Belgium forward broke his scoring drought in the 40th minute when he received the ball, spun to fend off a defender, and unleashed a left-footed shot from outside the area that swerved into the corner of the net.

Hazard had missed the first seven games of the campaign before playing his first minutes since July on Tuesday as a late substitute in a 2-2 draw at Borussia Monchengladbach in the Champions League.

“I am happy for Hazard,” Zidane said. “Little by little he needs to get back into the team. We know the talent he has. He scored a good goal and it was just what we needed in the first half.”

Benzema doubled the lead before halftime when he controlled Lucas Vázquez’s cross to the far post and fired past goalkeeper Andrés Fernández. The French striker found Federico Valverde to put the result beyond doubt in the 54th.

David Ferreiro scored Huesca’s goal in the 74th before Benzema rounded off the victory with a header.

Madrid moved to the top of the standings with 16 points, with a postponed game still to make up. Real Sociedad and Cádiz are two points behind.

The promoted Huesca remained winless since its return to the topflight.

Madrid hosts Inter Milan on Tuesday in the Champions League seeking a win after a loss and draw in its first two group phase games.