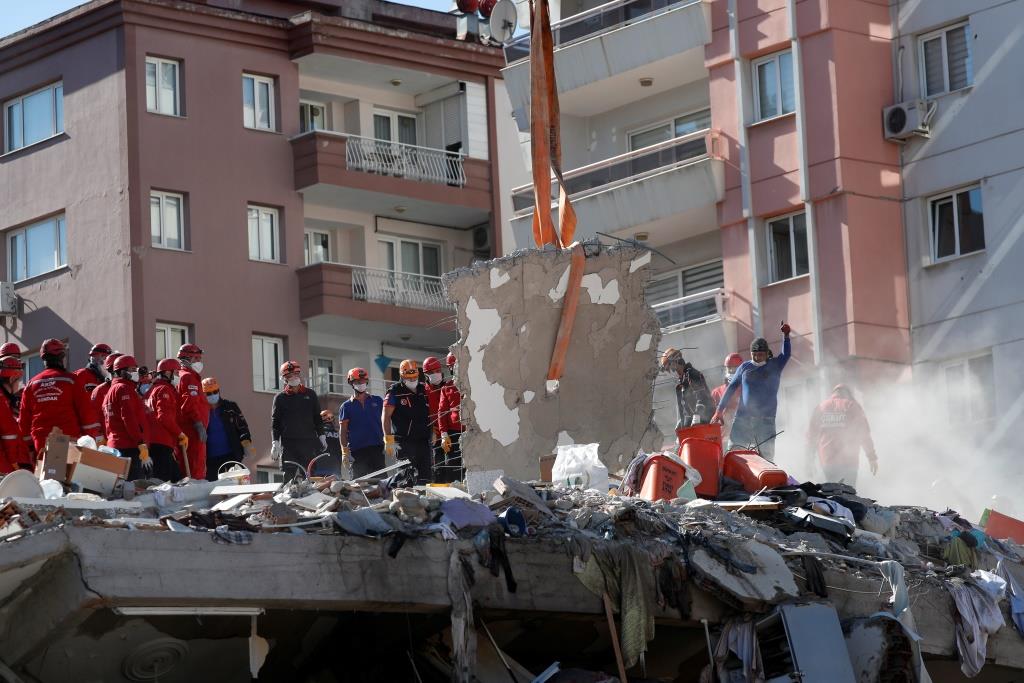 A mother and three of her children were pulled to safety on Saturday after being trapped for almost 18 hours under a building in the western Turkish city of Izmir that was flattened in a powerful earthquake.

One of the children succumbed to his injuries later in hospital, Health Minister Fahrettin Koca told reporters in Izmir. The child was one of 37 people killed in Friday’s quake: 35 in Turkey and two on the Greek island of Samos.

Rescuers were continuing efforts to free the woman’s fourth child. The mayor of the Aegean port city said around 180 people remained trapped.

“In the meantime, we are delighted to be hearing miracles happening as a result of diligent work by rescue teams,” Mayor Tunc Soyer told television channel Fox TV.

The quake destroyed at least 20 buildings in Izmir, causing panic in the city and setting off tidal waves that slammed into coastal areas and islands.

President Recep Tayyip Erdogan, speaking in a televised address, said 885 people were injured, 15 of them critically. Koca, the health minister, said on Saturday 243 people were still being treated in Turkish hospitals, eight in critical condition.

Environment Minister Murat Kurum said more than 100 people had been rescued so far.

Rescue work was punctuated by hundreds of aftershocks. By Saturday afternoon search operations had been completed in eight buildings and were continuing in nine others, officials said.

One resident said both her parents were still trapped.

Bulldozers removed debris from collapsed buildings while rescuers dismantled walls by hand. Workers set up 300 tents for those made homeless in the city, with 600 more tents on the way.

In a rare show of warmth between Turkey and Greece - caught up in a dispute over energy exploration rights in the eastern Mediterranean - Erdogan exchanged solidarity messages with Greek Prime Minister Kyriakos Mitsotakis on Friday.

“Whatever our differences, these are times when our people need to stand together,” Mitsotakis tweeted.

Erdogan responded in a tweet: “Turkey, too, is always ready to help Greece heal its wounds. That two neighbors show solidarity in difficult times is more valuable than many things in life.”

Turkey is crossed by fault lines and is prone to earthquakes. Cooperation between the two countries after a devastating quake in 1999 led to a period of warmer ties between them.