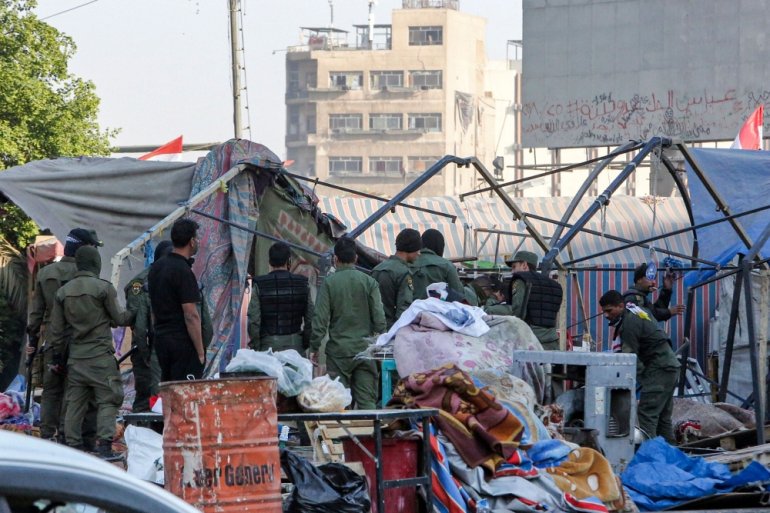 Iraqi security forces on Saturday cleared out sit-in tents from the capital's central square that has been the epicenter of the anti-government protest movement, a year after the eruption of demonstrations against corruption led to months of clashes with authorities across Iraq.

More than 500 people were killed during the months-long protest movement, many of them demonstrators shot by Iraqi security forces.

Iraqi authorities also reopened the nearby Jumhuriyah bridge, which leads toward the heavily fortified Green Zone housing government buildings and foreign embassies. The bridge across the Tigris River witnessed fierce clashes between protesters and government forces last year as protesters tried to cross it. It has been sealed off to traffic since.

The reopening of the bridge and removal of tents in Tahrir Square appeared to put a formal end to a mass movement that had for a brief moment given many Iraqis hope for the future.

“The opening of Al-Jumhuriyah bridge and the removal of the tents from Tahrir Square was done in coordination with the protestors and there was no tension whatsoever,” said Maj. Gen. Qais Al-Mohammadawi, the head of Baghdad Operations Command.

Security forces used bulldozers to help clear some of the protesters' tents that remained in Tahrir Square. A few days before, thousands had rallied there to mark the anniversary of the mass demonstrations that swept the country against corruption by Iraq’s entrenched political parties and its sectarian system.

Despite reaching unprecedented numbers in late 2019 and successfully mounting pressure on elites, the anti-government protests have been largely dormant in the wake of the coronavirus pandemic. Activists also blamed the drop in numbers on a violent crackdown by Iraqi security forces and militia groups, as well as kidnappings and targeted assassinations.

Baghdad Fears Rise of US, Iranian Tensions in Iraq

Sadr calls on supporters to attain majority in next Iraq parliament