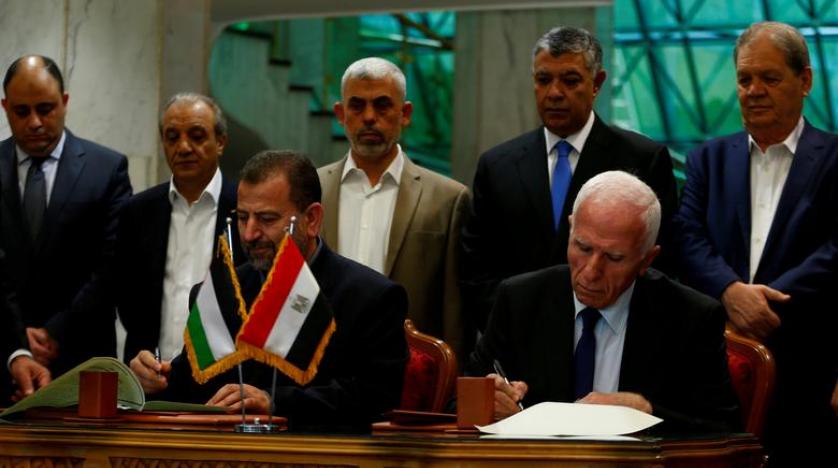 A senior Hamas delegation has concluded a visit to Cairo following a series of meetings with Egyptian officials to end inter-Palestinian division.

The delegation was headed by Deputy Chief of the Hamas Politburo Saleh al-Arouri.

The visit was “positive” and some outstanding issues have been resolved,

According to a Hamas statement, the delegation members discussed several issues of common interest, especially the bilateral relations and ways to bolster and develop them, the challenges facing the Palestinian cause and political developments in the region.

They also discussed means of ending division to achieve national partnership in order to face major threats to the Palestinian cause, it added.

Talks focused on ways to confront the difficult humanitarian situation in the Gaza Strip and means to alleviate the suffering of its residents.

After President Mahmoud Abbas issues the elections decree, Egypt is set to host meetings between heads of Fatah and Hamas movements.

Cairo is in direct contact with all Palestinian factions on bringing viewpoints on the Palestinian reconciliation closer, Egyptian sources said.

According to Egyptian expert in Palestinian-Israeli affairs Dr. Yasser Tantawi, Cairo’s stance on the Palestinian cause is firm.

Tantawi told Asharq Al-Awsat that his country meets with all Palestinian factions as part of the negotiations with Egyptian officials and diplomats.

“During these meetings, Cairo is briefed on the latest developments and takes diplomatic actions.”

He didn’t disclose the topics discussed during the Cairo meetings, but he stressed that Egypt is exerting strong efforts to reach the best possible solution.

Hamas condemns Israel's detention of its leaders in West Bank