In Pennsylvania, Trump touts the economy and warns of 'Biden depression' 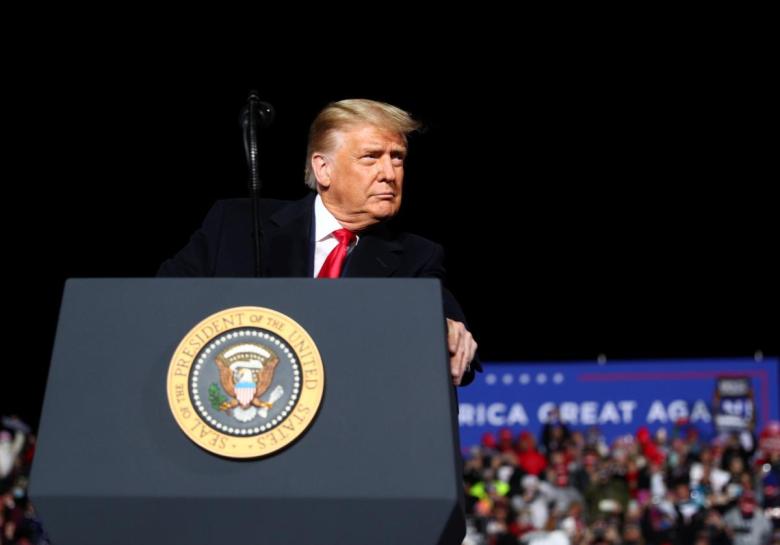 President Donald Trump campaigned in the crucial battleground state of Pennsylvania on Tuesday, telling supporters he needed a second term in the White House to ensure a successful recovery from the novel coronavirus pandemic and its economic fallout.

At an airport rally in Erie in the northwest corner of the state, Trump said Pennsylvania could put him over the top in the Nov. 3 election and warned that Democratic rival Joe Biden would decimate the state’s energy and manufacturing jobs.

“This is an election between the Trump super recovery, which is happening right now, and a Biden depression,” Trump told cheering supporters, who as at most of his rallies were packed shoulder to shoulder, with many not wearing masks.

“If you want open schools, an open economy and a safe, healthy, thriving country, vote for me,” he said.

Trump’s handling of the coronavirus pandemic, which has killed more than 220,000 people in the United States and thrown millions out of work, has taken a toll on his re-election prospects.

Biden has criticized Trump for failing to confront the pandemic and rushing to reopen the economy and belittling safety measures such as social distancing and wearing masks. Opinion polls show more Americans trust Biden than Trump to lead on the health crisis.

The former vice president was off the campaign trail on Tuesday to prepare for his debate this week with Trump.

Trump’s trip to Pennsylvania came the day before Biden’s old boss - former President Barack Obama - will campaign in the state for the Democratic candidate, which will play an important role in deciding who wins the White House race.

With two weeks left in the race, more than 35 million Americans already have cast early ballots, according to the University of Florida’s U.S. Elections Project. That represents more than a quarter of the total vote in the 2016 presidential contest.

National opinion polls show Biden holding a wide lead over Trump, although the contest is closer in the swing states that will decide the election, including Pennsylvania, Florida and North Carolina.
Read More: Latest US sanctions are a logical step in Trump’s robust Iran policy, says expert

Trump has gained ground on Biden in Pennsylvania, according to a Reuters/Ipsos poll released on Monday, which showed the challenger leading by 49% to 45%, slightly narrower than a week earlier.

“If we win Pennsylvania, we win the whole thing,” Trump said in Erie. 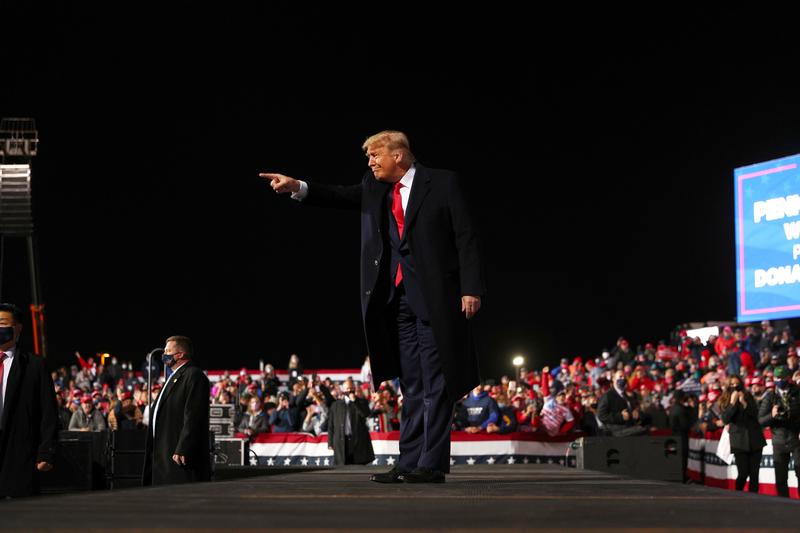 First lady Melania Trump, who was diagnosed recently with COVID-19 and had planned to travel with the president, did not make the trip out of “an abundance of caution” because of a lingering cough, her spokeswoman said.

Trump who was hospitalized for three nights after also contracting the coronavirus has resumed a heavy schedule of campaign travel, including rallies like the one in Pennsylvania, despite rising cases of the highly contagious disease.

Obama will campaign for Biden at a drive-in car rally in Philadelphia, the state’s biggest city, to urge supporters to vote early as the campaign hits the final stretch. It will be Obama’s first in-person campaign event for Biden, who served with him for eight years.

The visit to Pennsylvania also comes ahead of Thursday’s second and final debate between Trump and Biden, which will give the Republican president a prime-time opportunity to change the trajectory of the race.

BIDEN AHEAD IN MICHIGAN, TIED IN NORTH CAROLINA

New polls on Tuesday showed Biden maintaining his lead over Trump in Michigan, while the two were in a dead heat in North Carolina, two other critical swing states that could make the difference in the race.

Early voting returns show registered Democrats outpacing Republicans in most states that track party affiliation. Trump has repeatedly characterized mail-in voting as prone to fraud, although experts say it is as secure as any other method.

His campaign and the Republican Party have sought, with mixed success, to limit voting by mail in states that expanded it in response to fears of spreading COVID-19 at crowded polling places.

Wisconsin voters bundled up and braved temperatures as low as 30 degrees Fahrenheit (minus 1 degree C), to stand in line at polling locations in such cities as Milwaukee, where people waited about an hour, according to videos posted by media outlets.

“Every area - red counties and blue - there seems to be a lot of enthusiasm,” he said in reference to counties that lean toward either of the parties.

In Miami, where people gathered for the second day of in-person early voting, a police officer in uniform wore a “Trump 2020” face mask inside a polling location, according to the Miami-Dade Democratic Party chairman, who posted a photo of the officer.

The Miami Police Department said on Twitter the behavior was “unacceptable, a violation of departmental policy, and is being addressed immediately.”