Indonesians Take to the Streets to Protest New Labor Law 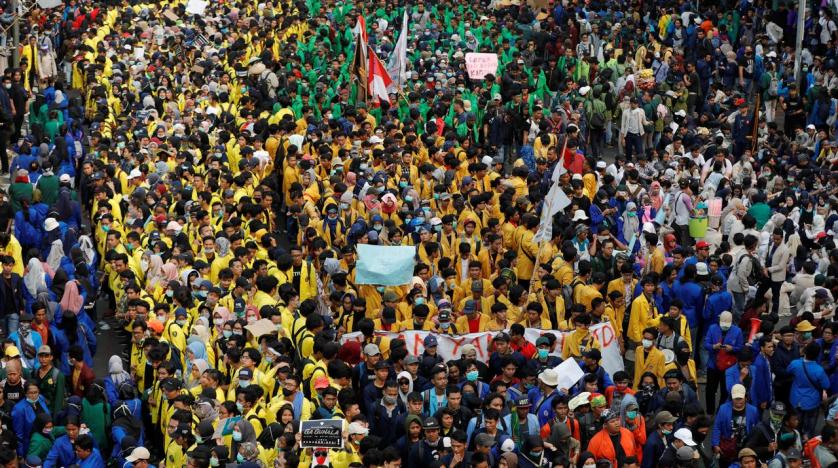 Protests against Indonesia's new jobs law were held in cities across the country on Tuesday, with demonstrators calling on the president to revoke the legislation they say will erode labor rights and weaken environmental protections.

More than 1,000 students and workers gathered near the Presidential Palace in Jakarta to express their anger at the legislation, which was passed on Oct. 5.

Protests were also held elsewhere in the country, including in Bandung, Surabaya and Makassar.

President Joko Widodo's administration said it is needed to ease bureaucracy, attract more investment and create jobs at a time when Southeast Asia's largest economy is reeling from the coronavirus pandemic.

While the legislation was greeted by the business community, critics allege it will do more harm than good.

Those gathered Tuesday, the first anniversary of Widodo's second term, voiced their frustration at the president's overall performance.

“Instead of making Indonesia more advanced, the fact is that the people are screaming because of the policies that do not take side of the majority of the Indonesian people,” Remy Hastian, the coordinator of the National Association of University Student Executive Bodies, said in a statement.

Elitos said that beyond the jobs law, she has been disappointed with the president's performance.

"Over the past year we saw those in power getting more opposite to the people,” Elitos said.

Widodo was sworn for his final five-year term last year and pledged to champion democracy and take bolder actions against poverty and entrenched corruption in the world’s most populous Muslim-majority nation.

He has been widely praised for his efforts to improve Indonesia’s inadequate infrastructure and reduce poverty, which afflicts close to a 10th of the nation's nearly 270 million people.