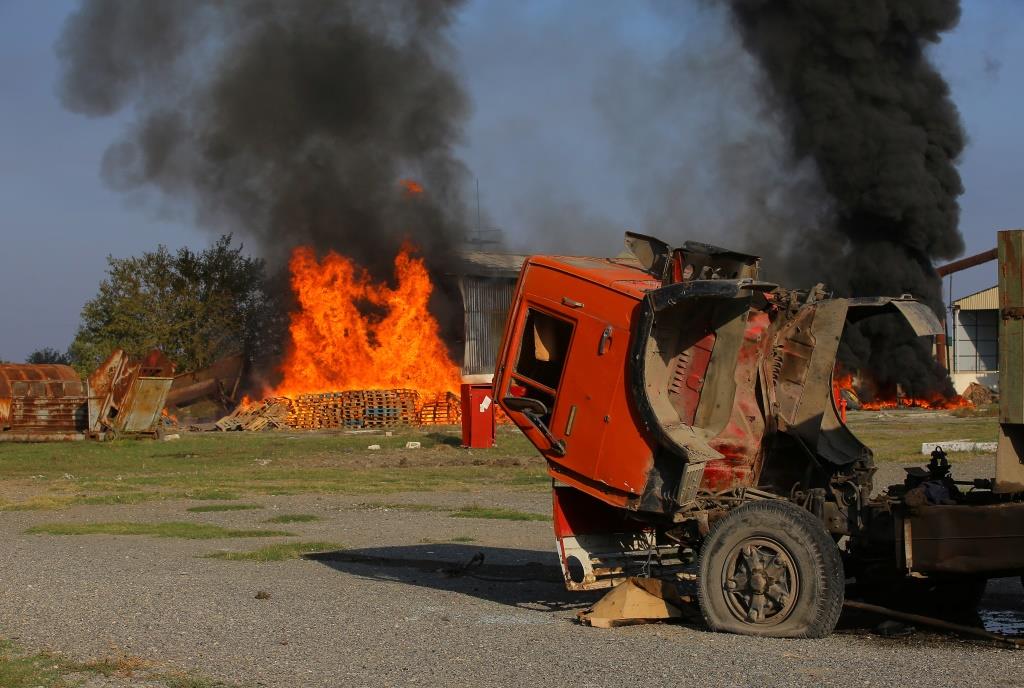 A ceasefire in the mountain territory of Nagorno-Karabakh was under severe strain on Tuesday after new clashes between Azeri and ethnic Armenian forces in their deadliest fighting since the 1990s. The ceasefire, agreed on Saturday, has had little impact on fighting that began on Sept. 27, despite concerns it could spark a wider conflict involving Russia and Turkey and fears over the security of gas and oil pipelines in the South Caucasus.

Officials in Nagorno-Karabakh, a breakaway enclave of Azerbaijan controlled by ethnic Armenians, reported new artillery battles on Tuesday morning and said fighting was particularly intense in southern areas of the conflict zone.

Azerbaijan's defense ministry also reported fighting in several areas, including disputed territory close to the line of contact that divides the sides.

Several hundred people have been killed in the fighting, which each side blames on the other, and there are fears of a humanitarian crisis.

Azerbaijan, which is a close ally of Turkey, says it has made territorial gains. But Armenia, which has a defense pact with Russia, says it has repulsed Azeri attacks and has the situation under control.

Armenian Prime Minister Nikol Pashinyan and Azeri President Ilham Aliyev both told Russia's TASS news agency in separate interviews on Monday they were ready to come to Moscow for talks.

But the new ceasefire appears to have had little or no more effect that an earlier deal brokered by Russia that failed to halt the fighting.

Nagorno-Karabakh said on Monday 729 of its military personnel and 37 civilians had been killed in the fighting.

Azerbaijan said 61 Azeri civilians had been killed and 282 wounded. It has not disclosed its military casualties.

Russia's permanent representative to the United Nations said the Security Council had discussed the conflict on Monday. Asked about the possibility of U.N. observers going to the region, he said that would require a mandate from the Security Council.

"This is not a quick process," the envoy, Vasily Nebenzya, was quoted as saying by TASS.

He suggested any observer mission also might involve the Organization for Security and Co-operation in Europe (OSCE). The security watchdog has led mediation in the conflict for years through a panel known as the Minsk Group, headed by France, Russia, and the United States.

Read More: Azerbaijan and Armenia allege truce violations, accuse each other in shelling

"Who will be there, in what capacity - is still a question that is being discussed," said Nebenzya.

Azerbaijan's ally Turkey says the Minsk Group's mediation has failed, and Baku wants a role for Ankara in peacemaking.

Azerbaijan seeks an Armenian withdrawal from Nagorno-Karabakh. Armenia rules this out and accuses Azerbaijan of making a land grab.