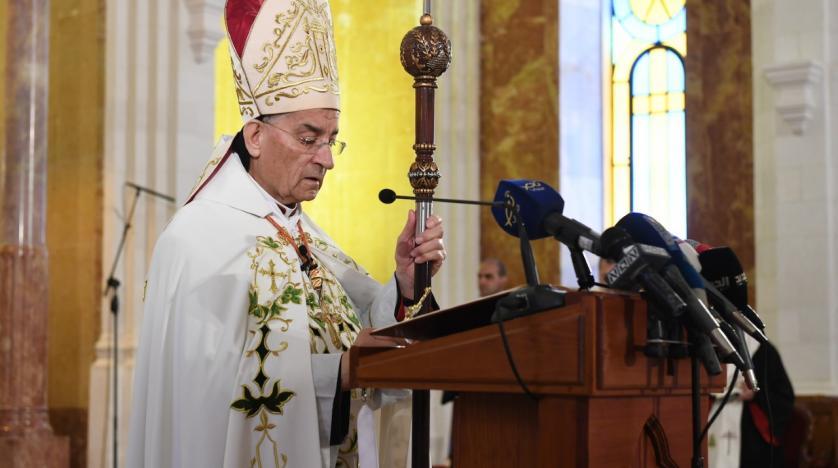 Lebanon's Maronite Patriarch Beshara al-Rai urged Lebanese leaders to stop delaying talks on forming a government during Sunday's mass sermon in which he blamed them for the country’s financial crisis and political deadlock.

Rai was peaking a day after demonstrators marched through Beirut to mark the first anniversary of a protest movement which erupted last October against corruption and mismanagement.

In the year since, Lebanon’s problems have been compounded by the coronavirus pandemic and a devastating explosion in Beirut in August, Reuters reported.

“Take your hands off the government and liberate it. You are responsible for the crime of plunging the country into total paralysis in addition to the implications of the corona pandemic,” the patriarch said in his sermon.

His remarks came after two main Christian parties, the Free Patriotic Movement (FPM) and Lebanese Forces, said this week they would not back the nomination of former Prime Minister Saad al-Hariri to lead a new government to tackle the deep economic crisis, further complicating efforts to agree a new premier.

“The responsibility and accountability is collective. Who among you officials has the leisure of time to delay consultations to form a government?” he said.

“No one is innocent of Lebanon’s (financial) bleeding.”

“The number of ministries and the names of ministers and quotas is still more important (to politicians) than the fate of Lebanon and the Lebanese,” he said.

“Return to your conscience, leaders … be humble and listen to the pain of your people.”

Hariri, who quit as prime minister last October in the face of the nationwide protests, has said he is ready to lead a government to implement reforms proposed by France as a way to unlock badly needed international aid.

Parliamentary consultations to name a new prime minister were due to be held last Thursday, but President Michel Aoun postponed the discussions after receiving requests for a delay from some parliamentary blocs.