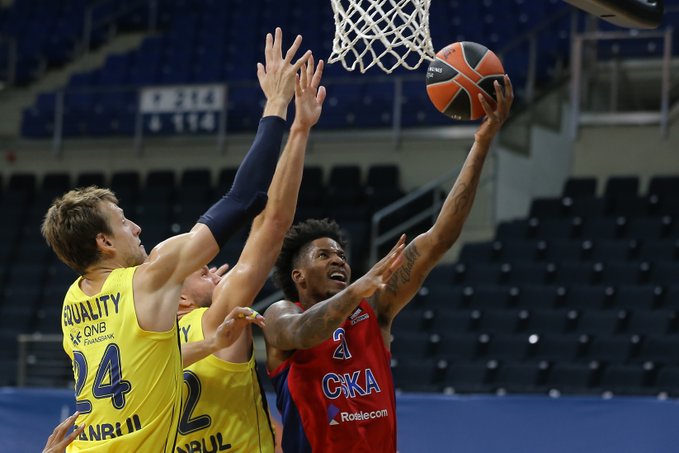 Both teams fought hard to end regular time at 69-69 as the game went to overtime.

Visitors CSKA Moscow scored 9 points in extra time while Fenerbahce Beko racked up 8, with the Russian team emerging the winner.

CSKA Moscow’s US forward Will Clyburn was the key player, scoring 26 points.

The Turkish team's US forward Jarell Eddie had 18 points.

This was Fenerbahce Beko's first loss in the 2020-21 EuroLeague season. The Istanbul club had two wins.

In the next game, Fenerbahce Beko will face Germany's Bayern Munich on Oct. 16 in Istanbul.

Fenerbahce Beko came second in the standings while Lithuania's Zalgiris Kaunas are currently leading the EuroLeague with a 3-0 win/loss record.

Zenit St. Petersburg lost by a result of 0-20 its Turkish Airlines EuroLeague Regular Season Round 3 and 4 games against Spain's TD Systems Baskonia Vitoria-Gasteiz and Valencia Basket which were scheduled to be played on Oct. 13 and Oct. 15 respectively.

The Russian club could not provide the minimum eight players as multiple Zenit players had tested positive last week for the novel coronavirus.