Mayflower 400: the science of sailing across the ocean in 1620 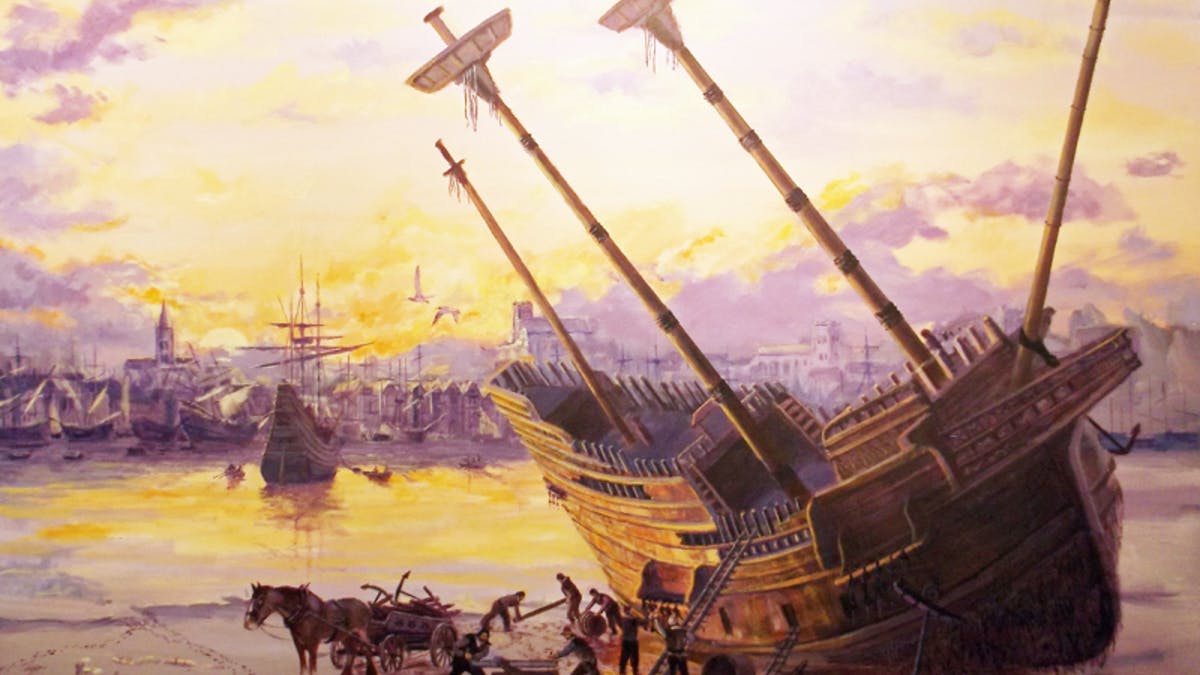 It is July 1620 in Southampton, England. Arriving into port is the Speedwell, a ship carrying a small religious group from the Netherlands. Anchored just off of the west quay of the town is the Mayflower, a larger ship with more passengers aboard, which is loading for a transatlantic voyage with the Speedwell. The passengers have permission and funding to start a trading settlement in the Colony of Virginia (which at the time extended far further than the modern state of Virginia), under the control of the Virginia Company.

Despite the historical significance of the Mayflower, we know very little about the ship and its voyage. We only know its name from a document written three years after the voyage. At the time the Mayflower was not notable or special and – because some of the passengers faced persecution for their religious activities – they probably kept a low profile.

Evidence suggests that it was “burden about nine score” or 180 tons. “Burden” was a term for cargo capacity, while a “tun” was a large cask of wine. The ship could therefore carry the equivalent of 180 tuns of wine.

There are unfortunately no illustrations or plans of The Mayflower from the time, so we don’t even know for certain what the ship looked like. We do know, however, that ships around this time were built to a series of similar rules (outlined in Swedish shipbuilder Fredrik Henrik af Chapman’s Architectura Navalis Mercatoria, published in 1768). We can therefore begin to estimate the proportions for the cargo carried, but with a caution that the rules varied between shipwrights, with many details not recorded and drawings not made.

Read More: Looted landmarks: how Notre-Dame, Big Ben and St Mark's were stolen from the east

In fact, the famous 17th-century diarist Samuel Pepys tells us that shipwrights “depended on their eyes … never pretending to the laying down of a draught, their knowledge lying in their hands so confusedly”. Based on typical proportions from the time we could expect that The Mayflower would have been around 30 metres in hull length and about 7.5 metres in breadth. 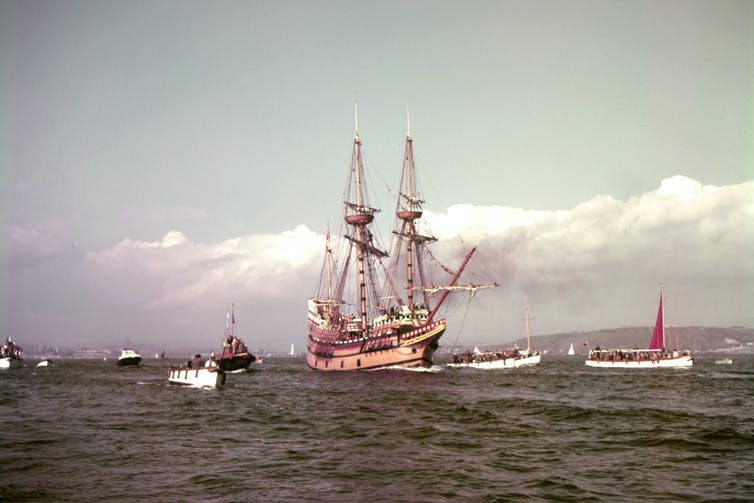 English merchant vessels were also expected to form a navy to protect the country if required. From similar vessels of the time, we can therefore reasonably assume that The Mayflower had raised “castles” at the bow and stern. A height advantage from the castles would have been useful in battle to fight and resist boarding.

The ship would also have carried a small number of cannon – mainly for self-defence. These would have been on a cramped gun-deck (where the passengers would also live) with gun-ports.

On August 15 1620, the two ships sailed for the New World from Southampton, but as soon as they departed, the Speedwell started leaking badly (despite some repairs already having been made in Southampton), requiring a diversion to Dartmouth to make repairs.

In mid-September 1620, they again departed England, but around 300 miles west of Land’s End the Speedwell leaked badly again, with the ship’s master complaining that “his ship was so leaky, as he must bear up, or sink at sea”. They returned to Plymouth, transferred as many passengers and stores as possible to the Mayflower, and set sail west again on 16 September. At the time it was suggested that the leaks were a plot by the captain and crew of the Speedwell to avoid a long and dangerous voyage.

Replica of the Mayflower sailing surrounded by other smaller ships.
Navigation in the 1600s was comparatively more advanced than many other sciences at the time. Sailors could measure their heading with magnetic compasses, and their speed with a log that was trailed behind the ship.

By measuring the height of the North Star above the horizon with instruments that were the forerunners of sextants, sailors could determine their position north of the equator (known as the “latitude”). However, on a rolling ship under cloudy skies taking accurate measurements and finding accurate positions was far from easy. 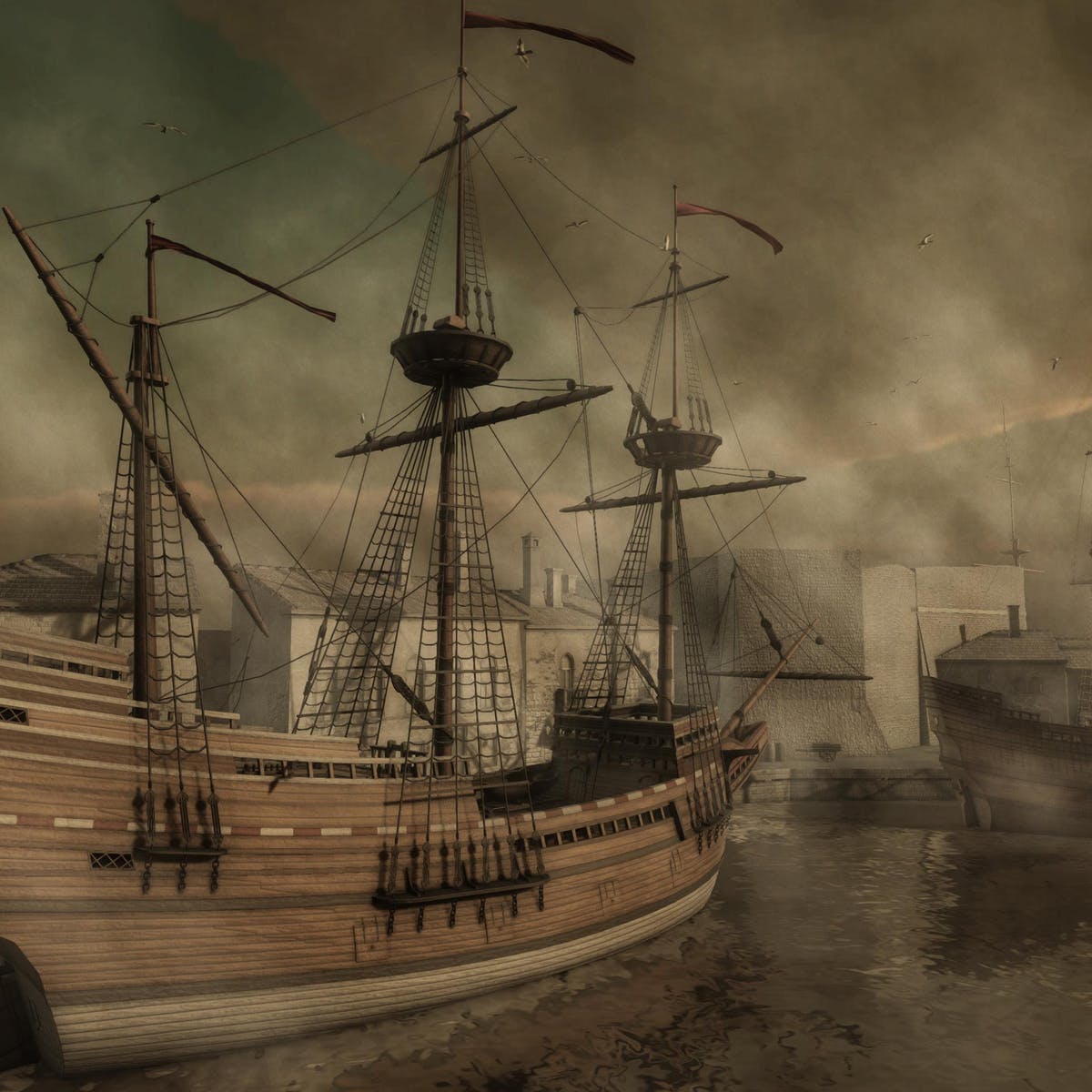 Knowing your position west or east of a point (“longitude”) was far more complicated. It could be found from measuring the local time when the sun reached its highest point in the sky, and comparing it to the time at a known point on land, as the local noon occurs four minutes later for every degree of longitude travelled west around the world.

Sadly clocks at the time were nowhere near accurate enough to measure this, and accurately measuring the height of the sun was difficult. Instead, sailors at the time used a combination of the compass, hourglasses and a log to record direction, time and speed, calculating a resulting position based on “dead reckoning”, which would become more inaccurate as the voyage progressed.

Read More: Vikings had smallpox and may have helped spread the world's deadliest virus

Despite some treacherous storms that nearly destroyed the vessel, The Mayflower arrived in North America after 66 days’ sailing. The ship was, however, just off Cape Cod, slightly north of the Colony of Virginia (which at that time extended north to Long Island Sound) where the colonists had permission to settle.

They tried sailing south, but encountered treacherous reefs and breaking waves and, low on provisions, they wisely headed north again, coming ashore initially at Provincetown, Massachusetts on November 21. But having landed outside of the Colony of Virginia, they had no contract to settle, or laws to follow.

Their solution was to draw up a democratic agreement (known as the Mayflower Compact), which governed them independently from England until they could obtain permission to settle where they landed. This was the first western example of a consensual government without a monarch. If their navigation had taken them just 65 miles further south, they would have landed in the Colony of Virginia, and history may have been different.

The Mayflower itself returned to England the following year, but sadly her Captain died in 1622. Left on the riverbank of the Thames, she fell into disrepair and was in such a poor condition that she was sold for parts in 1624. Ironically the Speedwell lasted far longer, sailing from Southampton to Virginia and back in 1635.

Why do we celebrate Independence Day on July 4? And when did fireworks become a tradition?