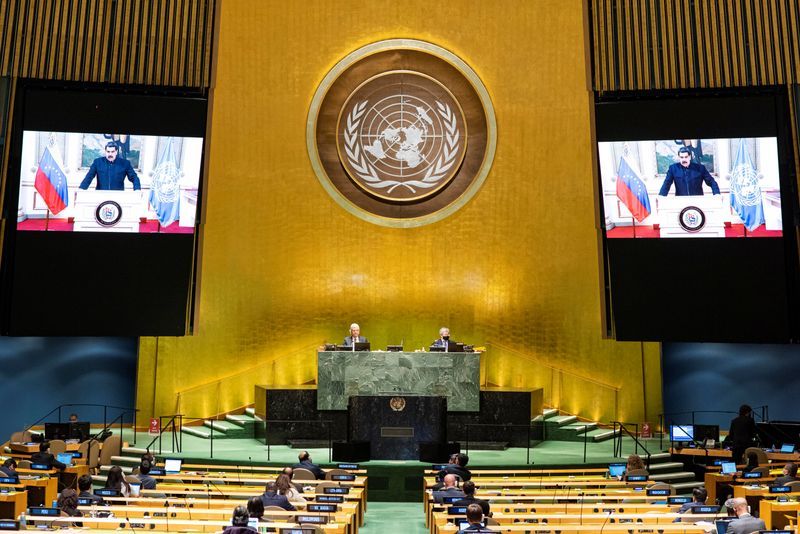 Venezuelan President Nicolas Maduro told the U.N. General Assembly on Wednesday all "countries that defend peace" should rally against U.S. sanctions clamped on the South American country and its allies like Cuba, Nicaragua and Syria.

The Trump administration has ramped up sanctions against Venezuela in the past two years as part of an effort to oust Maduro, who it accuses of corruption, human rights violations, and rigging his 2018 re-election.

Maduro has overseen a six-year economic collapse in the once-prosperous OPEC nation, which the opposition and most economists attribute to Venezuela's interventionist economic policies. Venezuela's ruling socialist party blames the U.S. sanctions for the country's woes.

"We must demand the cessation of all unilateral coercive measures, of all the alleged sanctions, and that they allow our people to exercise their own rights," Maduro said in his remarks.

Cuba and Nicaragua are two of Maduro's only remaining allies in Latin America, after left-leaning leaders lost power in countries like Brazil and Ecuador.

U.S. President Donald Trump has rolled back a detente with Havana, Washington's old Cold War foe, that was pursued by his predecessor Barack Obama. His administration has also sanctioned Nicaraguan individuals and companies in response to what it calls corruption and repression under President Daniel Ortega.

In a later video address, Venezuelan opposition leader Juan Guaido - who is recognized as the legitimate president by dozens of countries including the United States - urged the international community to take "decisive action" to oust Maduro, without being specific.

"Today I call upon all representatives of the member states...to consider a strategy that contemplates different scenarios after the diplomatic route has been exhausted," Guaido told representatives of over 30 countries that recognize him.

Venezuela plans to use Russian and Chinese coronavirus vaccines