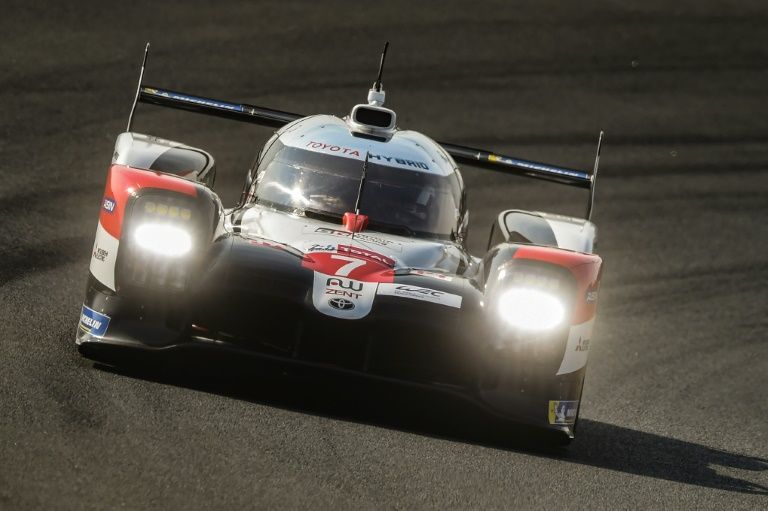 Toyota are on pole for the Le Mans 24 Hours race which gets underway at 1230 GMT Saturday in front of empty stands with Covid-19 keeping away the motorsport classic's normal crowd of 250,000 diehard fans.

Toyota are hot favourites to claim a third successive Le Mans, with the Japanese manufacturer's number seven car at the front of the grid.

Kamui Kobayashi, Mike Conway and Jose-Maria Lopez are out to make up for last year's near-miss when, with the race at their mercy, a puncture an hour from the finish gifted victory to Toyota's second car.

Sharing the front row for this 88th edition of Le Mans, held over from its traditional June date, is the Rebellion of American Gustavo Menezes, Norman Nato of France and Ayrton Senna's nephew Bruno.

On the second row is Toyota's winning car from 2018 and 2019 driven by Sebastien Buemi, Kazuki Nakajima and Brendon Hartley, who replaces Fernando Alonso.

Two-time Formula One champion Alonso is skipping a chance to land the Le Mans hat-trick as he focusses on his F1 return next season.

The second Rebellion shares the second row with the Enzo of Tom Dillmann, Bruno Spengler and Oliver Webb completing the five-car line-up for the elite LMP1 race.

This quintet are joined on the grid by 24 cars in the LMP2 category, 22 in LM GTE AM and eight in LM FTE PRO.

With 59 cars setting off, some with amateurs at the wheel, traffic problems, especially if the forecast rain and even hail arrives, could complicate matters.

"It was a mess in the night time practice session on Thursday," complained Buemi.

"The problem this year is the lack of opportunities for drivers to compete (due to coronavirus)," the Swiss former F1 driver said.

"Professional drivers know how to cope with traffic...but the amateurs don't know where to go, they race in the middle, it's very dangerous.

"And what's more this year we'll have 11 hours of driving at night."

Saturday's 1230GMT start time has been moved forward from 1400 to account for the shorter days in September.

This Le Mans will be played out with the famous La Sarthe circuit's cavernous grandstands eerily empty.

Organisers ACO had initially hoped to allow in a portion of the quarter of a million petrolheads who make the annual sleep-deprived pilgrimage.

But maintaining social distancing protocol around the entire 13 kilometre track was proving too much of a problem, resulting in the total crowd ban for the event uprooted by the pandemic from its usual June slot for the first time since 1968.