rebound in garment orders after demand crashed during spring shutdowns is helping to revive the Bangladesh economy.
Apparel makers, the country’s main export industry, say they are looking ahead to Christmas orders from the US and other major markets.
Remittances from Bangladeshi workers employed overseas have also recovered, helping to relieve pressures from a pandemic quasi-shutdown during the spring.
The Asian Development Bank reported this week that the economic comeback was encouraging. It is forecasting the economy will grow at a robust 6.8 percent annual pace in the fiscal year that ends in June if current conditions persist.
That’s a much brighter outlook than in April-May, when global clothing brands suspended or canceled orders worth more than $3 billion, affecting about 4 million workers and thousands of factories.

“At the moment we can say that the ready-made garment industry has been able to regain its growth trajectory upward compared to March-May,” said Rubana Huq, president of the Bangladesh Garment Manufacturers and Exporters Association, or BGMEA.
“As economies in the West were turning around we were successfully able to get the buyers back to the negotiating table, which is why 80 percent to 90 percent of the $3.18 billion in canceled orders have been reinstated,” she said.
Bangladesh earns about $35 billion annually from garment exports, mainly to the US and Europe. The industry is the world’s second largest after China’s. Bangladesh’s exports rose 0.6 percent to $3.9 billion in July,

after plummeting 83 percent to $520 million in April. Imports, which are reported on a quarterly basis, began recovering earlier, rising 36 percent in May-June.
In August, exports rose 4.3 percent from a year earlier, to $2.96 billion, mostly driven by apparel shipments, according to the government’s Export Promotion Bureau. Garment shipments totaled $5.7 billion in July and August. 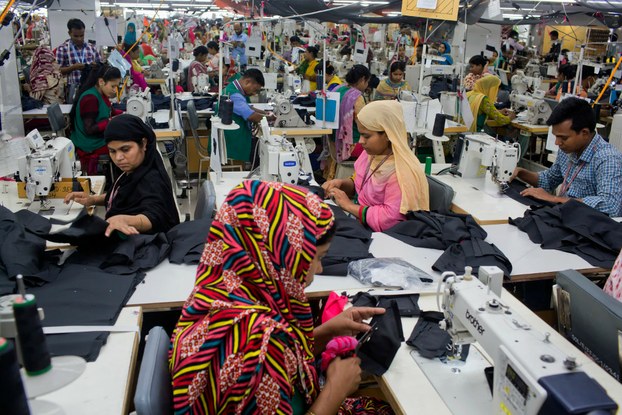 “The garment sector is making a good comeback. Our agriculture is doing well. Remittances are coming. These all are good signs for the economy,” said Ahsan H. Mansur, executive director of the Policy Research Institute, a think tank in Dhaka.
“The pace of the recovery is clearly visible. But challenges have been there too. The pace of the recovery will depend on how the pandemic behaves in the West over the next few months,” Mansur said. That’s the inestimable question facing everyone.

As of Thursday, Bangladesh had reported more than 342,000 confirmed coronavirus infections and 4,823 deaths. The country confirmed its first positive case on March 8.
Some experts say that the actual number of infections is higher than the official count. The garment industry says few workers in its factories have fallen ill thanks to precautions such as employing fewer people on the production lines and imposing safety guidelines. The government imposed a nationwide lockdown on March 26, and the garments sector was closed for nearly three months, reopening only gradually.
The country director for the ADB, Manmohan Parkash, said that the government has managed the crisis well, “with appropriate economic stimulus and social protection measures.”
“We are encouraged by the increase in exports and remittances, and hope the recovery will be sustained, which will help in achieving the projected growth rate,” Parkash said.

Saudi Arabia Seeks to Increase Investment in Iraq to $2.6Bn