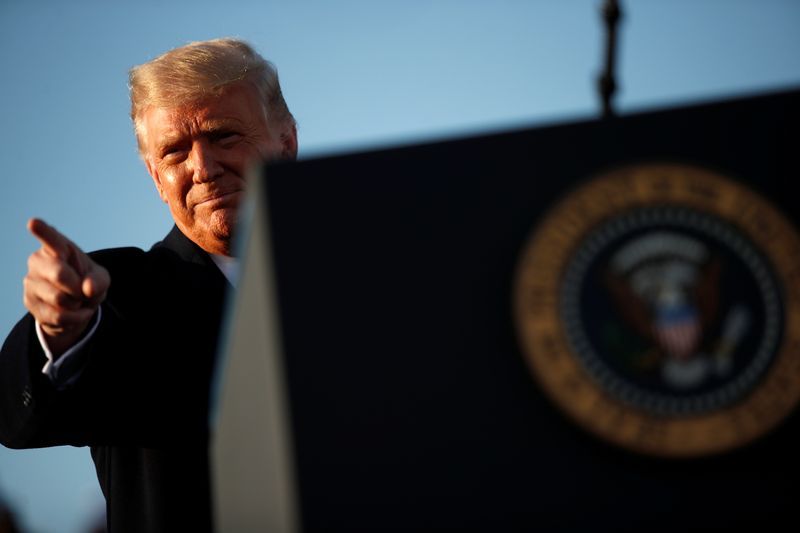 Republican President Donald Trump takes his re-election campaign to the political swing state of North Carolina on Saturday in an effort to boost his poll numbers against Democratic rival Joe Biden and shore up support among military members there.

Trump has boasted about revitalizing the U.S. armed forces with increased defense budgets but has seen his political support slip among troops.

A poll in the Military Times last month found a “slight but significant” preference among active duty military members for Biden, the former vice president, and a decline in favorability for Trump.

North Carolina has a number of military bases, and the president’s rally in Fayetteville is near Fort Bragg, a large base with tens of thousands of personnel.

An average of polls by RealClearPolitics shows a tight race between Trump and Biden in North Carolina, with Biden holding a slight lead.

The president has had a mixed relationship with military leaders. He described John McCain, a senator and Vietnam War veteran who is now deceased, in derogatory terms and has had to deny reporting in the Atlantic magazine that he referred to U.S. war dead as “losers” and “suckers.”

Biden has sought to capitalize on that vulnerability. His campaign said on Friday it was releasing an ad directed at military families to be aired in swing states including Arizona, Florida, Pennsylvania, North Carolina, and Wisconsin.

“President Trump has been a consistent champion of America’s service members and veterans and has succeeded at rebuilding our military, reforming the Department of Veterans Affairs, and launching initiatives to help veterans adjust to civilian life,” the campaign said in a statement on Friday after Vice President Mike Pence touted Trump’s record with the military in Arizona.

Trump has traveled repeatedly to North Carolina in recent weeks, making a stop there during the Republican National Convention and a later trip to declare the city of Wilmington a World War Two Heritage City.

Hillary: I can't think of Trump winning a second term