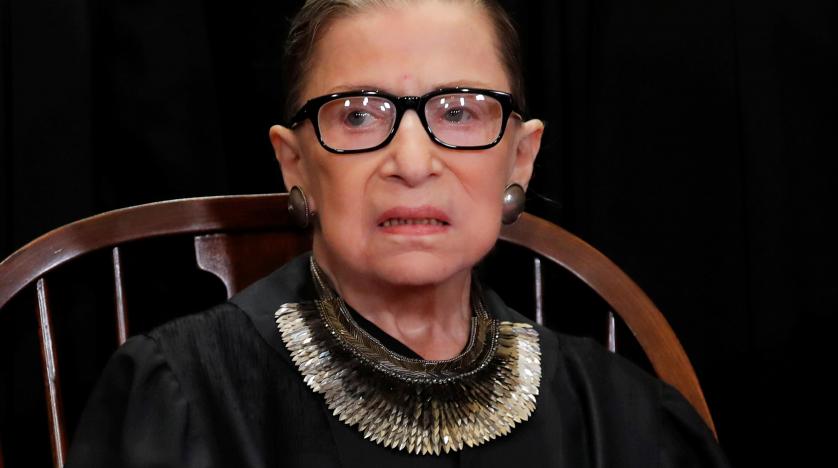 US Supreme Court Justice and liberal icon Ruth Bader Ginsburg died Friday, opening a crucial vacancy on the high court expected to set off a pitched political battle at the peak of the presidential campaign.

Affectionately known as the Notorious RBG, the 87-year-old Ginsburg was the oldest of nine Supreme Court justices.

She died after a fight with pancreatic cancer, the court announced, saying she passed away "surrounded by her family at her home in Washington, DC."

Coming just 46 days before an election in which President Donald Trump lags his Democratic rival Joe Biden in the polls, the vacancy offers the Republican a chance to lock in a conservative majority at the court for decades to come.

Read More: Hurricane Laura: At least 14 killed in US storm

Trump -- who was told of Ginsburg's passing while on the campaign trail -- issued a statement praising her as a "titan of the law," but gave no indication whether he intended to press ahead with a nomination.

Accolades flowed in for the pioneering Jewish justice.

Trump's predecessor Barack Obama said in a tweet that Ginsburg "fought to the end, through her cancer, with unwavering faith in our democracy and its ideals."

Joe Biden, said she was "an American hero, a giant of legal doctrine, and a relentless voice in the pursuit of that highest American ideal: Equal Justice Under Law."

Former president Jimmy Carter called her a "beacon of justice", while Hillary Clinton thanked her for paving the way for "so many women."

In Washington, hundreds of tearful mourners headed to lay flowers and light candles in front of the Supreme Court, where the diminutive Ginsburg sat for 27 years, even taking arguments and issuing opinions from her hospital bed after repeated bouts of illness over the past two years.