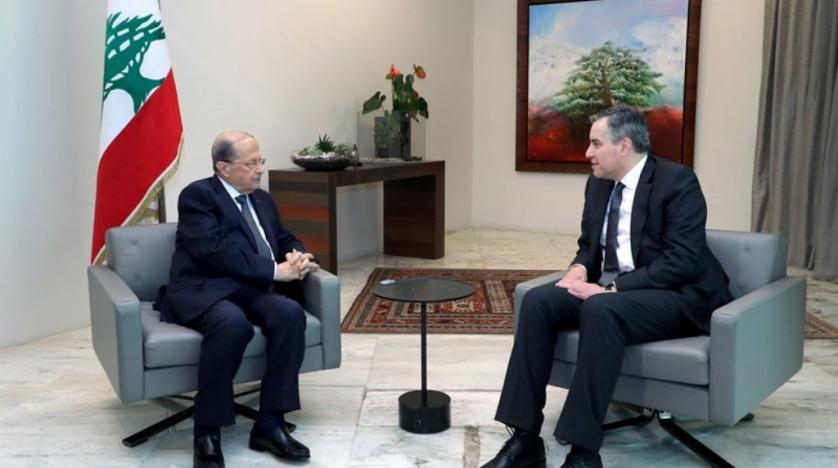 Despite a deadlock in Lebanon’s government formation efforts, Prime Minister-designate Mustafa Adib refrained from stepping down Thursday, instead announcing that he would give more time for talks.

“I discussed with President Michel Aoun the difficulties we are facing to form the new government. I am fully aware that we do not have the luxury of time. I count on everyone’s cooperation in order to form a government whose powers are to implement what was agreed upon with French President Emmanuel Macron,” Adib said after visiting the Baabda presidential palace.

The PM said he would wait to give more time for consultations to form the cabinet.

Informed sources told Asharq Al-Awsat that Adib was on Thursday planning to give up the task to form the cabinet. “However, Paris interfered and demanded him to put his decision on hold, paving way for additional talks.”

The sources said that Aoun made the same request.

Talks over forming a new government stumbled amid proposals to switch control of ministries, many of which have been held by the same factions for years.

The PM-designate wants a government of specialists to deliver on reforms mapped out by France.

Paris has been leaning on Lebanon’s sectarian politicians to name a cabinet swiftly and embark on reforms to exit the economic crisis.

But a deadline of Sept. 15 that politicians promised Paris they would meet has already been missed.

Sources close to the two Shiite parties, Hezbollah and the Amal Movement, told Asharq Al-Awsat Thursday that talks between the PM-designate and representatives from the two groups, failed to reach a breakthrough.

“The Shiite parties refuse to give up the Finance Ministry and insist on naming the Shiite ministers in the new cabinet,” the sources said, adding that the French initiative does not stipulate switching controls of portfolios.

However, other sources said accepting to keep the finance ministry with the Shiite sect would damage the French initiative and would open the appetite of other parties on certain portfolios.

As Adib met with representatives of the Shiite duo Thursday, Hezbollah’s Loyalty to the Resistance parliamentary bloc issued a statement questioning the attempts of some of "those who are forming the government behind the scenes" to confiscate the representation of other components.

The bloc criticized the role played by Washington in the course of the formation of Lebanon's new government, accusing the US administration of sabotaging the line-up.

Lebanon’s President Steps up Rhetoric Ahead of Parliamentary Consultations