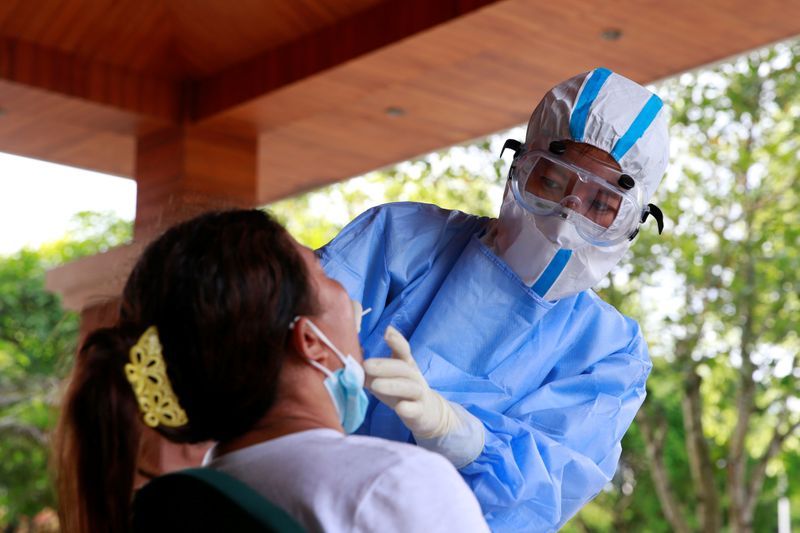 Myanmar authorities are racing to build a field hospital in the commercial capital of Yangon to cope with a surge of coronavirus infections that doctors fear threatens to overwhelm the country's fragile health system.

The Southeast Asian nation reported 307 new cases of COVID-19 on Tuesday, its highest daily toll since the start of the pandemic in March, and another 134 on Wednesday morning, taking the total to 3,636 cases and 39 deaths.

Myanmar had gone weeks without a case of local transmission before an outbreak in mid-August in the western region of Rakhine that has spread across the country.

Three hospitals in Yangon, the site of most of the cases and now under a second lockdown, have been repurposed to treat COVID-19 patients and the government is building a field hospital with 500 beds on a football pitch.

"We have no more space to accommodate a huge outbreak," Kaung Kyat Soe, the chief of the new temporary hospital, told Reuters on Tuesday, as construction workers labored on the field.

"The situation will get worse if we can't accept patients, that's why we are building the shelters urgently," he said.

Decades of neglect by Myanmar's formerly ruling military junta led the health system to be ranked the worst in the world by the World Health Organization in 2000, the last time it published ratings. The health budget was around 0.3% of GDP prior to the start of democratic reforms in 2011.

As of March, the World Bank said Myanmar had just 383 ICU beds for a population of 51 million and 249 ventilators, compared with 6,000 beds and more than 10,000 ventilators in neighboring Thailand, a country of 69 million. More ventilators have since been donated to Myanmar.

Some Yangon doctors said the government's response had contributed to the shortage of hospital space and treatment options.

Officials have asked people who want to be tested to be hospitalised before undergoing swab tests, contributing to a shortage of patient beds, said Kyaw Min Tun, who runs a fever clinic in the city. "That is not necessary," he said.

In addition, medical workers suspected of having the virus have been sent to quarantine centres around the city, forcing them to shut private clinics, said Ko Ko Htwe, a doctor at a local clinic.

A spokesman for the health ministry did not answer phone calls and messages from Reuters seeking comment.

Yangon chief minister Phyo Min Thein said in an interview published in state media on Wednesday that he hoped to get the outbreak under control within three weeks.

He said there were still hundreds of places in government-run quarantine centers where suspected cases and people who have had contact with positive cases are being sent.

Some in the centres have complained of poor conditions, including patients who have tested positive for COVID-19 being forced to share rooms with those who have not tested positive.

Pwint Thiri San, 23, told Reuters by phone that her symptoms were mild but she worried about receiving adequate care if they got worse.

Some rooms did not have running water, she said, and she had not seen any medical workers.

She and another patient, who asked not to be named, said a woman in the building died on Tuesday after struggling to breathe.

They said her neighbors had had to call out to get the attention of volunteers helping run the center.

Reuters was not able to independently confirm the account. Poe Poe, the manager, said by phone she was not allowed to answer questions.

"I am worried what will happen if I suffer shortness of breath here," said Pwint Thiri San.

"I feel depressed and vulnerable," she said.