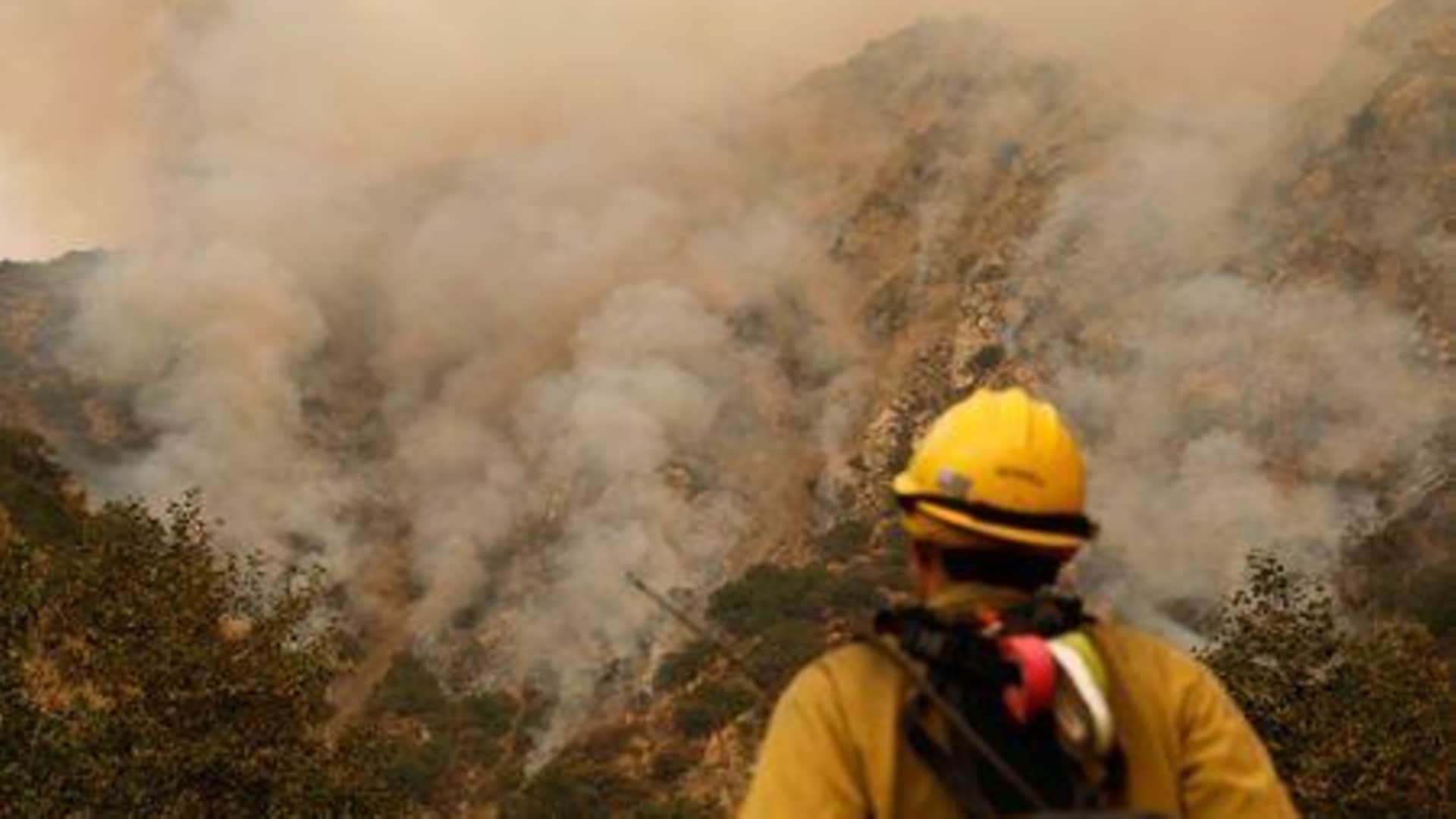 A blitz of wildfires across Oregon, California and Washington has destroyed thousands of homes and a half dozen small towns this summer, scorching more than 4 million acres (1.6 million hectares) and killing more than two dozen people since early August.

Tracy Koa, a high school teacher, returned to Talent, Oregon, on Saturday after evacuating with her partner, Dave Tanksle, and 13-year-old daughter to find her house and neighborhood reduced to heaps of ash and rubble.

“We knew that it was gone,” Koa said in a telephone interview on Sunday. “But then you pull up, and the devastation of just every home, you think of every family and every situation and every burnt-down car, and there are just no words for it.”

Crews in Jackson County, Oregon, where Talent is located, were hoping to venture into rural areas where the Almeda Fire has abated slightly with slowing winds, sending up thick plumes of smoke as the embers burned. From Medford through the neighboring communities of Phoenix and Talent, an apocalyptic scene of charred residential subdivisions and trailer parks stretched for miles along Highway 99. 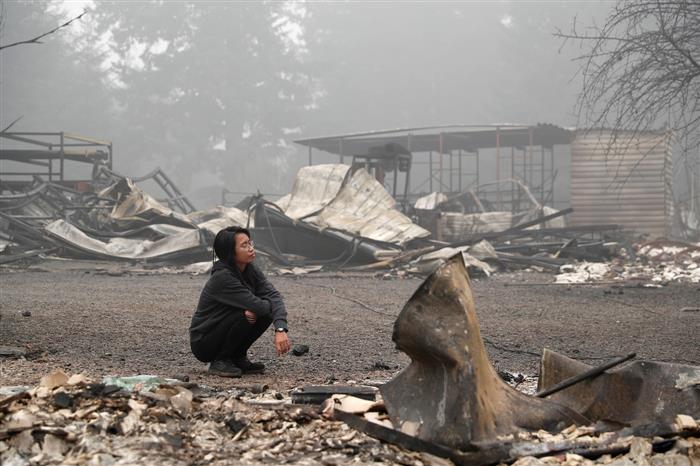 Community donation centers popped up around Jackson County over the weekend, including one in the parking lot of Home Depot in Phoenix, where farmers brought a pickup truck bed full of watermelons and people brought water and other supplies.

Farther north in Clackamas County, Dane Valentine, 28, showed a Reuters journalist the remains of his house.

Down the road, a woman with a Trump 2020 sign on her home, pointed a shotgun at the journalist and shouted at him to leave.

“You’re the reason they’re setting fires up here,” she said, perhaps referring to false rumors that left-wing activists had sparked the wildfires.

Still, emergency officials worried that the shifting weather might not be enough to quell the fires.

“We’re concerned that the incoming front is not going to provide a lot of rain here in the Medford region and it’s going to bring increased winds,” Bureau of Land Management spokesman Kyle Sullivan told Reuters in a telephone interview on Sunday.

Search on for survivors as wildfires torch millions of acres in U.S. West

Trump rallies supporters in Nevada, seeks to overcome Biden lead in the state

At least 10 people have been killed in Oregon, according to the office of emergency management. Oregon Governor Kate Brown has said dozens of people remain missing across three counties.

There were 34 active fires burning in Oregon as of Sunday morning, according to the state’s office of emergency management website.

Thick smoke and ash from the fires have darkened skies over the Pacific Northwest since Labor Day last Monday, creating some of the world’s worst air-quality levels and driving residents indoors. Satellite images showed the smoke was wafting inland in an easterly direction, the Bureau of Land Management said on Twitter on Sunday. 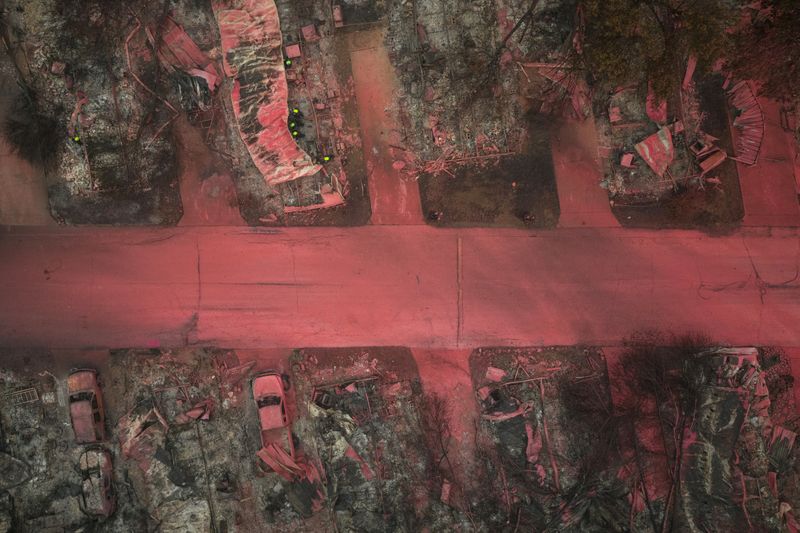 Drought conditions, extreme temperatures and high winds in Oregon created the “perfect firestorm” for the blazes to grow, Brown told CBS’ “Face the Nation” on Sunday.

“This is a wake-up call for all of us that we’ve got to do everything in our power to tackle climate change,” the Democratic governor said.

President Donald Trump, a Republican, was scheduled to travel to California and meet with federal and state officials on Monday. He has said that Western governors bear some of the blame for intense fire seasons in recent years, as opposed to warming temperatures, and has accused them of poor forest management.

In California, evacuations were ordered for the northern tip of the San Gabriel Valley suburb of Arcadia as the Bobcat Fire threatened communities.

At Wilderness Park in the foothills of the San Gabriel Mountains, firefighters prepared to stave off the blaze as it worked its way downhill.

Steep terrain and dry hills that have not burned for 60 years are providing fuel for the blaze, which started over the Labor Day weekend.

As the smoke that has been clogging the air and blocking heat from the sun begins to lift, firefighters expect the weather to heat up and fire activity could increase, the California Department of Forestry and Fire Protection said.

Improving weather conditions had helped them gain a measure of containment over blazes in many parts of the state, and some evacuated residents in Madera County near where the massive Creek Fire was burning, were allowed to go back home.

More than 4,000 homes and other structures have been incinerated in California alone over the past three weeks. About 3 million acres (1.2 million hectares) of land have been burned in the state, according to Cal Fire.