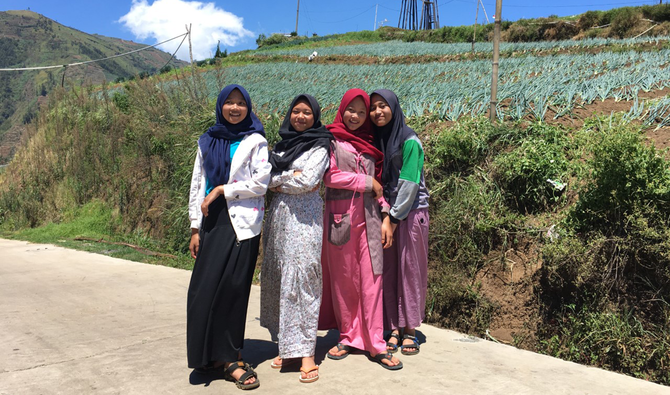 Dewi Listiani must spend hours standing and staring at a wall in her kitchen, where a phone screen relays online lessons until her remote learning class ends for the day.

It is the only place in her home where she can access a strong internet connection.

“There is a certain spot in the kitchen in my house where the network is stable, so I hang my phone on the wall, and I have to stand all the time during the online class to be able to view the screen,” the 14-year-old grade nine student told Arab News.

She added that there were times when she has paid 3,000 Indonesian rupiahs (20 US cents) per day for 24-hour internet — a costly amount considering she needs access three to four times a week for online learning.

Listiani is not the only student facing problems.

Since March, when the pandemic forced authorities to shut down public institutions, including schools, to limit the spread of the virus, students, teachers and parents in the mountainous region of Batang regency in the Central Java province have been struggling with remote learning measures.

Common issues around the country, including major cities, are patchy internet connections, and a lack of internet quotas and gadgets to access online learning.

“We were at school earlier to register our user names and passwords for free internet quota from the government, but we still don’t know when we can actually use it,” Fika Nur Ainiy, a 13-year-old grade eight student told Arab News.

Ainiy and her three friends, who live in Batang regency’s Pranten village, which is nestled in the foothills of Mount Prau and Mount Sipandu, are lucky to have their phones. Still, the patchy network in the region has not made online learning any more accessible.

Linda Risma Ifadah said she hopes to return to school “normally, just like before,” while another student, 13-year-old Siti Laila Mubarokah, said she misses meeting people at school.

“What I miss the most is being together and playing with friends in school,” she said.

Kumpul Edy Suwanto, headmaster at an elementary school in Pranten, said he is not relying on the free quota from the government after he “tried online learning and found it was not suitable for students.

“Students who don’t have phones would often gather in close proximity to one another and form a small crowd to view the lessons on one phone, and that would break the health protocol, so we resort to teachers visiting them for home tutoring,” Suwanto told Arab News.

He added that since the school district has no coronavirus cases, the school committee had been trying to conduct in-school learning, in shifts, with a limited group of students. However, the regency administration ordered the school to stop its partial reopening this week and return to online learning.

The decision resulted in objections from parents “who were glad that the school had reopened, albeit partially,” Suwanto said.

“It’s because the parents are mainly farmers who have to leave home early in the morning to work on their potato fields and, therefore, cannot keep monitoring their children’s participation in online classes. So it looks like we will be sending teachers to revisit students’ homes and have home tutoring in small groups,” he said.

The strain of remote learning is also affecting parents, such as 33-year-old Binarsih, a resident of Central Java’s Klaten regency, who said she had a hard time understanding her children’s lessons as she is “only a high school graduate, and today’s lessons are more difficult.”

She said: “We are lucky, however, that my youngest son, a sixth-grade elementary school student, can access the internet at a relative’s house. Otherwise, I would have to spend hundreds of thousand rupiahs just to buy the quota.”

Another parent, Suharni, said she faces a tough time making her son, a grade three student, understand that the school closure is “not a holiday,” and that her work as a farm laborer means she cannot stay by his side and ensure he studies.

But like Binarsih, Suharni is lucky to have neighbors who provide free internet access to children in the neighborhood.

One neighbor is Sutrisno, who has been sharing his internet with students.

“Sometimes, I see them using it to play games, but most of the time they use it for online classes, so I just let them. When the quota is running out, and the internet is slowing down, they would know that it is better to use it for school instead of playing games,” Sutrisno told Arab News.

There are about 68 million students in the country, including 28 million elementary school pupils.

As of Wednesday, Indonesia had reported 203,342 coronavirus cases and 3,307 new cases, with Jakarta and Java being worst affected.

Before schools ... everything you need to know about the danger of Corona on children