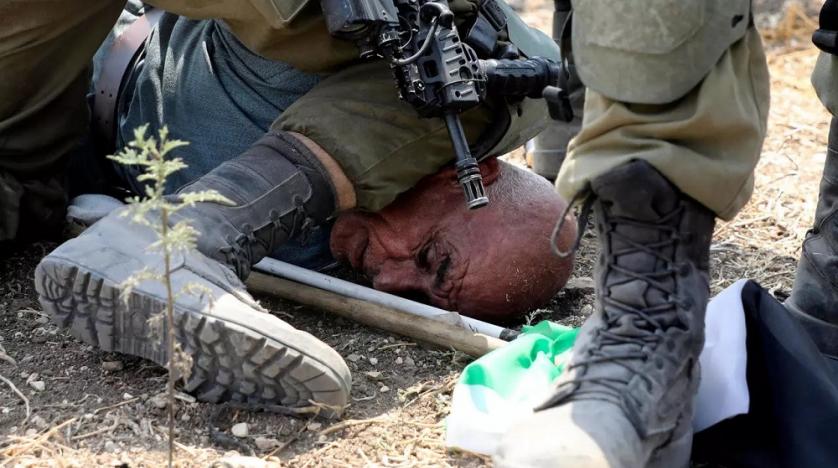 Footage of an Israeli soldier throwing a Palestinian activist to the ground and kneeling on his neck has sparked outrage in the Palestinian territories and beyond.

The protester, named as Khairi Hanoun, a man in his late 60s, took part in demonstrations on Tuesday near Tulkarm, in the north of the West Bank, against moves to extend a neighboring Israeli settlement.

Footage taken by AFP in recent weeks at different protests has shown him shouting at Israeli soldiers.

Hanoun was also involved in Tuesday's demonstration at a road bordering the village of Shufah, between Nablus and Tulkarm.

He was seen waving a Palestinian flag, along with dozens of other protesters, and watched by several journalists.

In video footage, Hanoun appeared to touch an Israeli soldier, who then pushed him to the ground, putting his knee on his neck as he secured his hands with a plastic tie.

Edited footage of the incident has been circulating on social media and Palestinian television channels.

Several are posted with the hashtag #PalestinianLivesMatter.

They compare the image with George Floyd, an unarmed African American killed in police custody, who was photographed with police kneeling on his neck.

Saeb Erakat, secretary-general of the Palestine Liberation Organization, wrote on Twitter on Wednesday about the images condemning the "aggression".

The Hamas movement said "such acts" were among the "main causes" of tensions in the region.

However, Israel's army said the images did not show the extent of the confrontation.

"We emphasize that the videos on social media are partial, heavily edited and do not reflect the violent riot nor the violence against IDF (Israeli) troops that happened prior to the apprehension," the army said.

Israel's army said "a Palestinian known as an inciter" had "shoved" a soldier "a number of times".

According to the army, soldiers "showed restraint" but "were forced to apprehend the suspect that repeatedly assaulted them".

Soldiers provided medical care after his arrest, the statement added.