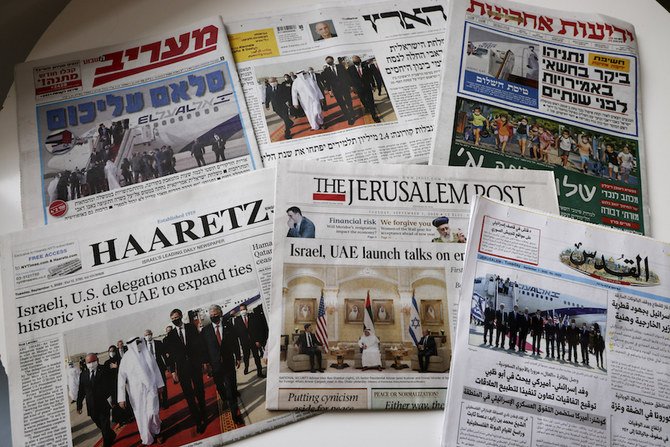 History was made after Israel’s first official delegation landed in Abu Dhabi on Monday, weeks after the two sides signed a peace treaty signaling a move toward cooperation and prosperity, with journalists on the trip telling Arab News about their experience.

The landmark direct flight by Israel’s national carrier, numbered LY971 in a nod to the UAE’s international dialing code, is due to return on Tuesday with the number 972, which is Israel’s dialing code.

“I’ve been covering the diplomatic arena for more than 10 years and I had a lot of trips and traveled around the world with Prime Minister (Benjamin) Netanyahu and others, and this is very, very unique, probably the most unique trip I ever had,” Ariel Kahane, a journalist from the Hebrew-language free daily newspaper Israel Hayom, told Arab News. “It’s actually being part of history, an historical breakthrough, and we are very excited to be a part of that.”

Israel and the UAE have opened phone lines and held discussions between various ministries and officials since the peace agreement was announced.

“We, as Israelis, I think, for a long time have wanted, not just peace with Arab countries, but peace on the terms of Israel being Israel,” Lahav Harkov, from the Jerusalem Post, told Arab News. “This is a country (UAE) and a people (Emiratis) who are excited to do business with us, to have cultural exchanges with us, to visit us and for us to visit them.”

“I think that one of the major achievements of those talks in the last days in Abu Dhabi will not just be promoting the peace or promoting the relationship between Israel and the UAE on the ministerial level, but also by people,” Diplomatic correspondent for Israeli public broadcaster KAN, Gili Cohen, told Arab News. “I think that the Sheikh Bin Zayed Mosque and the new Abraham center that is being built right now will promote the co-existence that is so needed in this area.”

“The accord reached between the United States, Israel and the United Arab Emirates on Aug. 13, 2020, is a courageous step toward a more stable, integrated and prosperous Middle East,” said a joint statement from the three nations.

The Israeli delegation was treated with respect by the Emiratis and received impressive hospitality, according to the journalists.

“I was impressed by the goodwill and the very nice way the Emirates government treated us,” said Kahane, who visited the Gulf last year to report on a peace and prosperity workshop in Bahrain. “They took care of all the small details. The hospitality was really unique, especially from a Jewish person who eats kosher food and so on, and they took care of that as well. I was also impressed with how much they want to make peace with Israel and cooperate with Israel ... not only formal peace but good ties with Israel.”

An Israeli site: Most of the Arab discourse on social media is against normalization and criticizes the UAE

Netanyahu could be suspended as PM, Israel Attorney General says