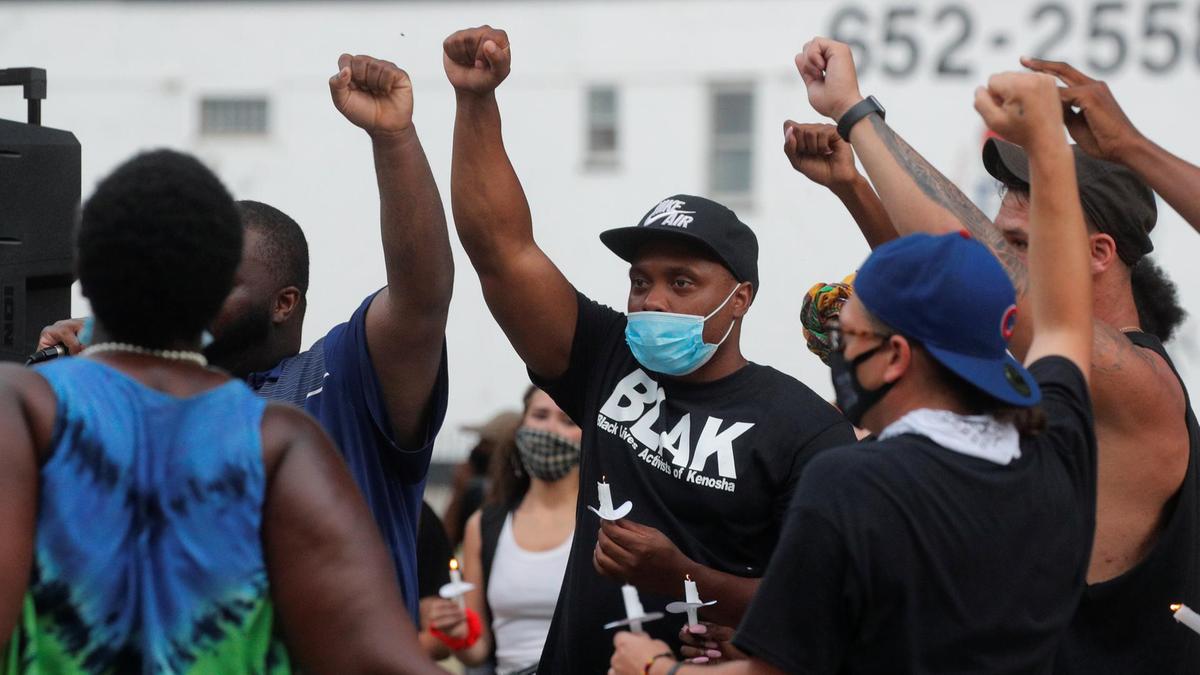 Black Lives Matter organisers in Kenosha, Wisconsin, planned a rally and march on Saturday as reinforced National Guard units stood by with orders to prevent a resurgence of violence that convulsed the lakeside city earlier in the week.

A tense calm prevailed for a third night on Friday in the downtown area surrounding a courthouse and park that was the hub of protests in support of Jacob Blake Jr., the Black man shot in the back by a white police officer on Sunday.

The shooting of Mr Blake, in front of three of his children, turned the mostly white city of 100,000 people into the latest flash-point in a summer of US-wide demonstrations against police brutality and racism.

Mr Blake survived but was left badly wounded and paralysed from the waist down. Mr Blake will likely participate via video from his hospital room in a court hearing next week about criminal charges that predated the shooting, his lawyer told Reuters on Saturday, adding he would plead not guilty.

Anger at the 29-year-old's shooting, captured on video that went viral, led to street skirmishes, with protesters hurling firecrackers and bricks at police in riot gear who fired volleys of tear gas and rubber bullets. On Tuesday night three demonstrators were shot - two fatally - by a white teenager armed with a semi-automatic rifle.

In Kenosha on Saturday, people painted messages of unity and hope on boards protecting storefronts after several businesses were burned to the ground in arson attacks and vandalism. 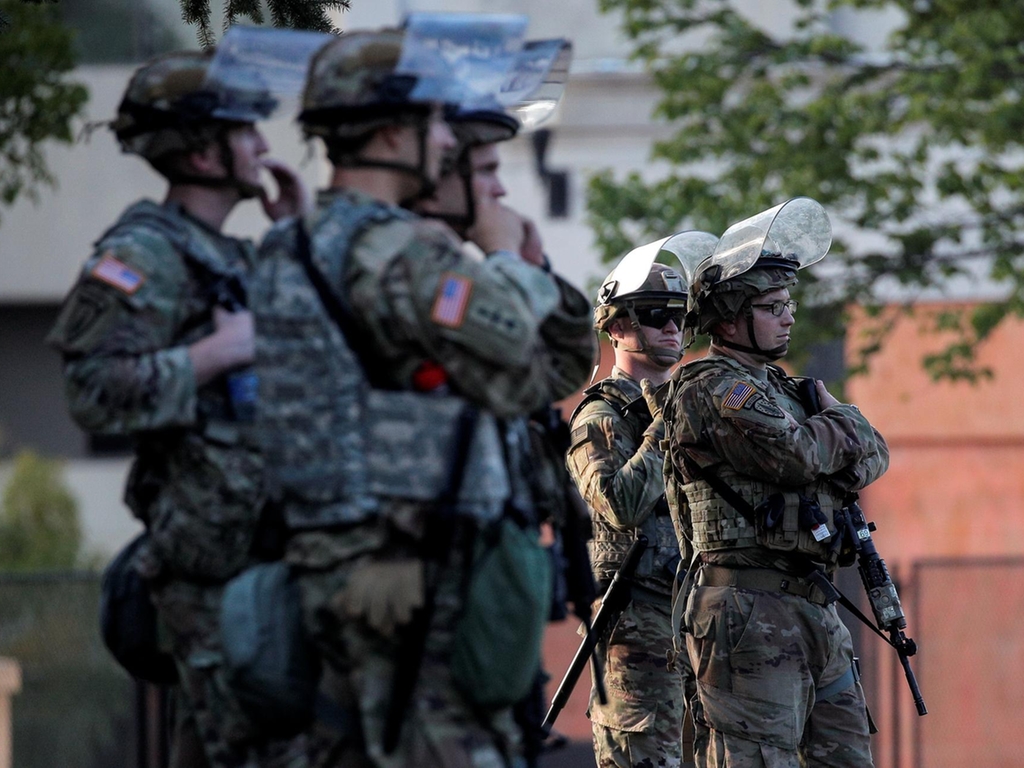 "It's gotten to the point where I won't go out after a certain time, after dark. Who's to say that within the crowds there's a guy who wants to kill Black people," said Kenosha resident Macari Gosa, 27, who works at a discount convenience store.

The 17-year-old suspect in Tuesday night's killings, Kyle Rittenhouse, surrendered to the police on Wednesday near his home in Illinois close to the Wisconsin border. Kenosha officials have been criticised for videos showing law enforcement agents giving him water before the burst of violence and generally acting chummy with armed militia men in the streets.

Since mid-week, as Governor Tony Evers deployed additional Wisconsin National Guard troops to help local law enforcement restore order, the unrest has subsided in Kenosha, about 40 miles (65 km) south of Milwaukee on the shore of Lake Michigan. By Friday, more than 1,000 Guard soldiers were on the ground, many from out of state, ahead of a large protest march through Kenosha planned by activists for Saturday afternoon.

Mr Rittenhouse is being held without bond and awaiting an extradition hearing on returning him to Wisconsin to face six criminal counts, including first-degree intentional homicide, attempted homicide, reckless endangerment and unlawful possession of a firearm by a minor.

One of his lawyers, prominent Atlanta-based trial attorney Lin Wood, said his client acted in self-defence.

"An egregious miscarriage of justice occurring with respect to this 17-year-old boy," Mr Wood wrote on Twitter on Friday.

Mr Blake, who has undergone multiple surgeries since the shooting, had been handcuffed to a hospital bed because of an outstanding arrest warrant. The handcuffs were removed on Friday and officers guarding Blake stood down after the warrant was vacated, according to his attorney, Pat Cafferty. 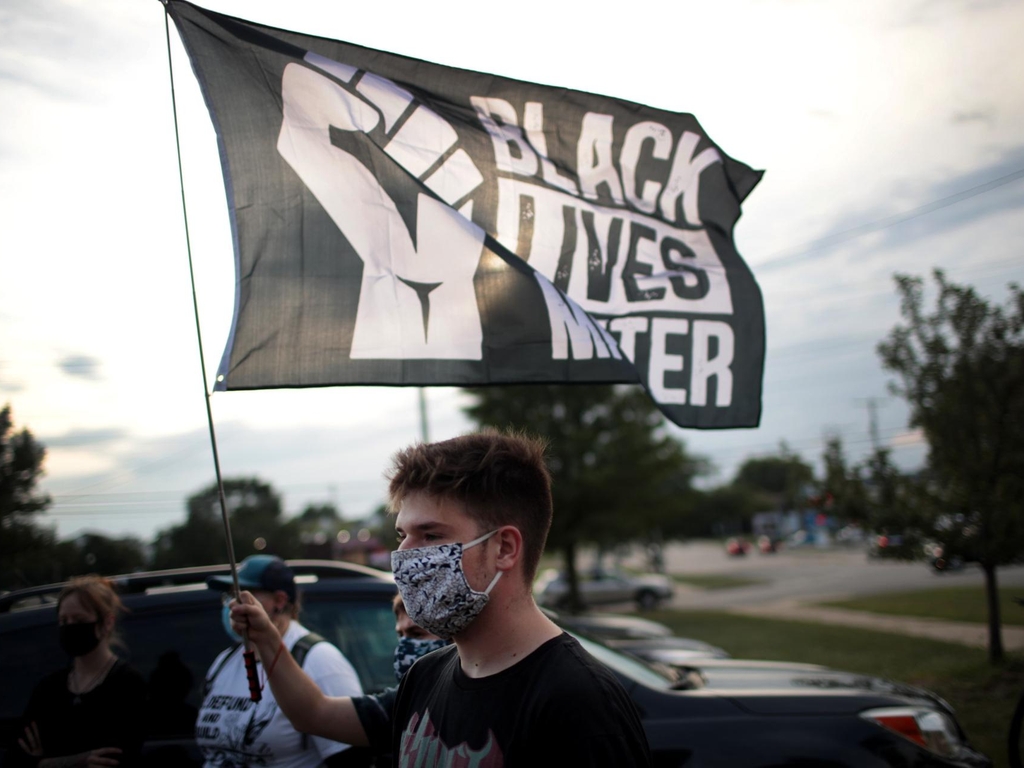 The warrant was based on a criminal complaint filed against Mr Blake in July based on statements made by his ex-girlfriend, the mother of three of his children, that was released to Reuters on Friday.

The woman told police Mr Blake broke into her home on May 3 and sexually assaulted her before stealing her truck and debit card.

Wisconsin Attorney General Josh Kaul said this week that police confronted Blake when called to the home of a woman who had reported her "boyfriend was present" without permission, and officers tried to arrest him. Mr Kaul said efforts to subdue Blake with a Taser failed, and that investigators later recovered a knife from the floor of the car that Blake was leaning into when he was shot.

On Friday, the Kenosha police union defended the officers, saying Blake was armed with a knife, fought the officers and was given several chances to cooperate before they used deadly force.

Blake's lead attorney, Ben Crump, has said his client was not armed with a knife and did not provoke or threaten police.