Turkey threatens to suspend UAE ties over deal with Israel 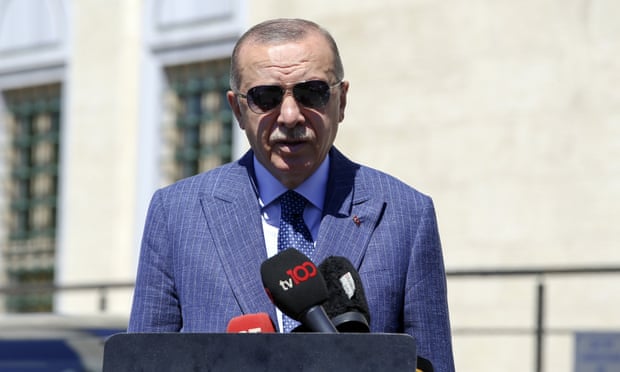 Turkey has threatened to suspend its diplomatic relations with the United Arab Emirates and recall its envoy, a day after the Gulf state announced it would become the third Arab country to establish full ties with Israel.

“The move against Palestine is not a step that can be stomached,” President Recep Tayyip Erdoğan told reporters on Friday.

He said he had told his foreign minister that “we may also take a step in the direction of suspending diplomatic ties with the Abu Dhabi leadership or pulling back our ambassador”.

Erdoğan has increasingly styled himself as the Palestinians’ lone regional champion, despite his country having had diplomatic relations with Israel for decades.

Thursday’s announcement has divided the region, with Iran also denouncing it as an act of “strategic stupidity from Abu Dhabi and Tel Aviv”. Tehran’s foreign minister described the agreement as a “dagger … unjustly struck by the UAE in the backs of the Palestinian people and all Muslims”.

As part of the US-brokered deal, the UAE claimed it won a concession for the Palestinians as Israel agreed to temporarily “suspend” its planned annexation of areas of the occupied West Bank.

However, Israel’s prime minister, Benjamin Netanyahu, has been clear he remains committed to annexation, and Palestinian leaders slammed the UAE deal as a betrayal that damaged their cause.

The new alliance has broken the status quo in which Israel was mostly isolated by its neighbours as a pariah.

Jordan, which with Egypt was the only other Arab state to have recognised Israel before Thursday’s announcement, issued a statement acknowledging the deal without praising it.