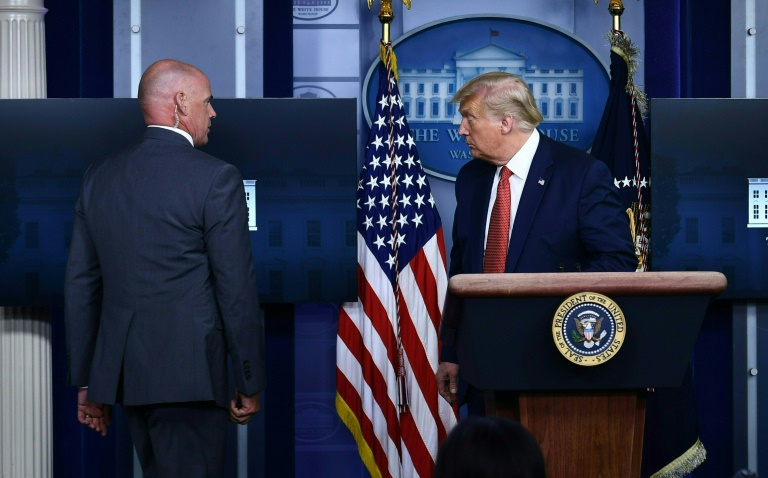 US Secret Service agents shot and wounded a man who was apparently armed outside the White House on Monday, President Donald Trump, after being briefly whisked away in the middle of a press conference.

A 51-year-old male approached a Secret Service officer standing at the corner of 17th Street and Pennsylvania Avenue, one block from the White House, according to Tom Sullivan, the chief of the Secret Service Uniformed Division.

The suspect told the officer he had a weapon and ran "aggressively" towards him, drawing an object out of his clothes, Sullivan said in a statement that was broadcast on Twitter.

He then assumed a "shooter's stance" as if he intended to fire, whereupon the Secret Service officer shot him in the torso, Sullivan added.

Officers on the scene administered first aid, and emergency medical services were called. Both the suspect and the officer were taken to hospital.

"The Secret Service Office of Professional Responsibility will be conducting an internal review of the officer's actions," Sullivan said, adding the DC Metropolitan Police Department had been contacted.

As the president was speaking to reporters in the White House briefing room, a Secret Service bodyguard abruptly approached him and interrupted, saying in a quiet voice, "Sir, could you please come with me?"

Trump and staff members left. Doors to the briefing room, still filled with journalists, were locked.

Outside, black-clad Secret Service agents with automatic rifles could be seen rushing across the lawn and took up positions behind trees. According to Fox News, whose camera team was outside, two shots were heard.

Minutes later, Trump reappeared at the press conference and announced that someone had been shot by the Secret Service outside the White House grounds.

"Law enforcement shot someone, it seems to be the suspect. And the suspect is on the way to the hospital," he said.

Trump, a Republican who faces a tough and bitterly divisive election on November 3, said he knew nothing about the identity or motives of the person shot. "It might not have had anything to do with me," he said.

There was no immediate precise information on what sort of threat the person allegedly posed.

But when asked if the person had been armed, Trump answered: "From what I understand, the answer is yes."

Trump said the incident took place "on the outside" of the White House perimeter, which is currently being reinforced by a new iron fence twice the height of the previous version.

"I don't believe anything was breached, they were relatively far away," he added.

"The White House complex was never breached during the incident, nor were the Secret Service protectees ever in danger," Sullivan said.

Returning to the podium after the disruption, Trump appeared calm.

He resumed his virulent criticism of opposition Democrats and praise for his handling of the coronavirus crisis, which polls show two-thirds of Americans believe he has botched.

Questioned on whether the security incident had rattled him, Trump answered: "I don´t know, do I seem rattled?"

"It´s unfortunate that this is the world, but the world's always been a dangerous place," he said.

Philipos Melaku, one of a small group of veteran protesters who camp out near the White House, said he had heard a shot.

"I heard a gunshot and before that I heard screaming," he told AFP.

"After that immediately, pointing their AR-15s, at least eight or nine men came in running."

Trump went on to praise the US Secret Service, which is in charge of guarding the president, as "fantastic people, the best of the best."

"I feel very safe with Secret Service," he said. "A lot of terrific-looking people ready to go if something was necessary."

Trump to Name Amy Coney Barrett to US Supreme Court

Pompeo seeks to end Sudan dispute before US presidential elections