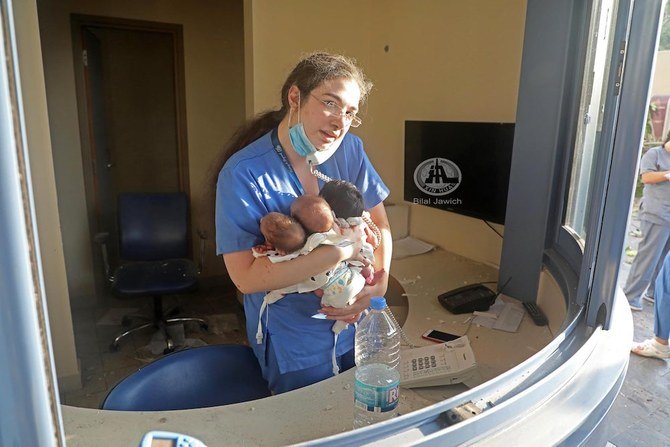 A nurse pictured carrying three newborn babies at a hospital damaged in the Beirut explosion has described being knocked unconscious by the blast.
Pamela Zeinoun has been hailed as a hero for cradling the babies amid the chaos following the explosion.
The nurse was knocked out inside the maternity ward when the blast hit.

She told Al Arabiya that when she came around, she immediately ran to save the five newborn babies inside the neonatal intensive care unit at Al Roum Hospital in Ashrafieh district.
“I managed to carry three between my arms, and my colleague carried the other two,” she said. “My main concern was to ensure their safety, because they’re very weak.”
The photo of Zeinoun was shared by the photographer Bilal Jawich shortly after the explosion ripped through the Lebanese capital, killing at least 137 people, injuring more than 5,000, and damaging up to 300,000 homes.

Jawich said he took the picture from inside the hospital, which is just a few kilometers from the port.
He said that throughout his 16-year career, he has never seen anything like what happened on Tuesday. He praised the nurse for her heroism and for saving the newborns and refusing to let go of them during this critical time. 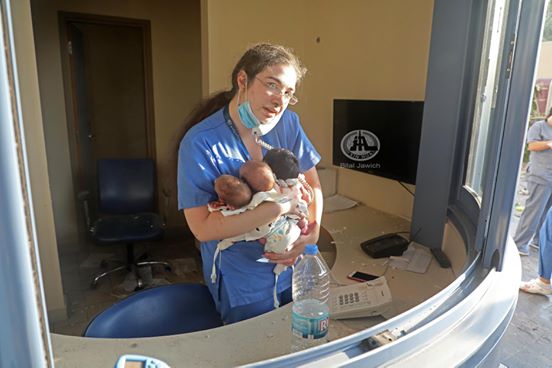 “I was amazed when I saw the nurse holding three newborns,” Jawich told CNN Arabic, adding that the hospital was littered with rubble and several bodies were strewn across the floor upon his arrival.
“I noticed the nurse's calm, which contrasted with the surrounding atmosphere just one meter away.
“The nurse looked like she possessed a hidden force that gave her self-control and the ability to save those children. People stand out amidst these violent and dark and evil circumstances and this nurse was up to the task,” he said.

Who is the most powerful woman in the world for 2020?