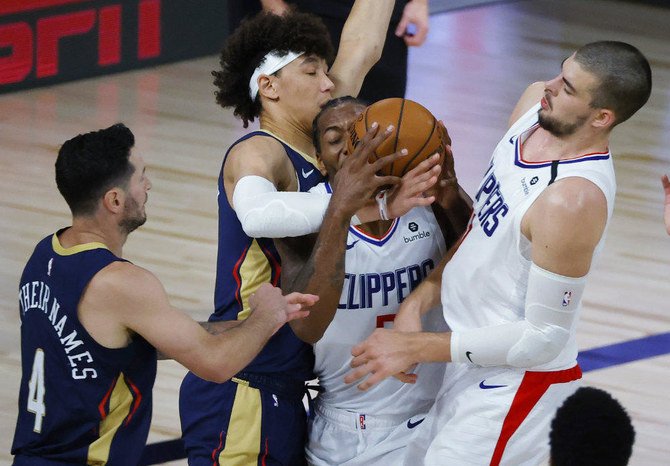 LAKE BUENA VISTA, Florida: Paul George made three straight 3-pointers in the opening minutes and scored 28 points for the Los Angeles Clippers in a 126-103 victory over the New Orleans Pelicans on Saturday night.
Los Angeles broke a franchise record by making 25 of 47 3-pointers, with George making 8 of 11. The Clippers also tied a team record for 3-pointers in a half and fell one short of the NBA record by hitting 16 of 24 in racing to a 77-45 lead.
Los Angeles made its first six 3-pointers to take a 20-6 lead.
Kawhi Leonard had 24 points o help the Clippers bounce back from a 103-101 loss to LeBron James and the Los Angeles Lakers on Thursday night in their first game of the restart.
The Pelicans had a minor scare midway through the first half when rookie Zion Williamson stepped on Reggie Jackson’s foot and appeared to slightly roll his right ankle while driving to the basket, ending up on his backside under the basket. He got up with a slight limp and was subbed out, then returned for the start of the second half.
Williamson finished with seven points and four rebounds in 14 minutes. Nickeil Alexander-Walker scored 15 points for New Orleans. 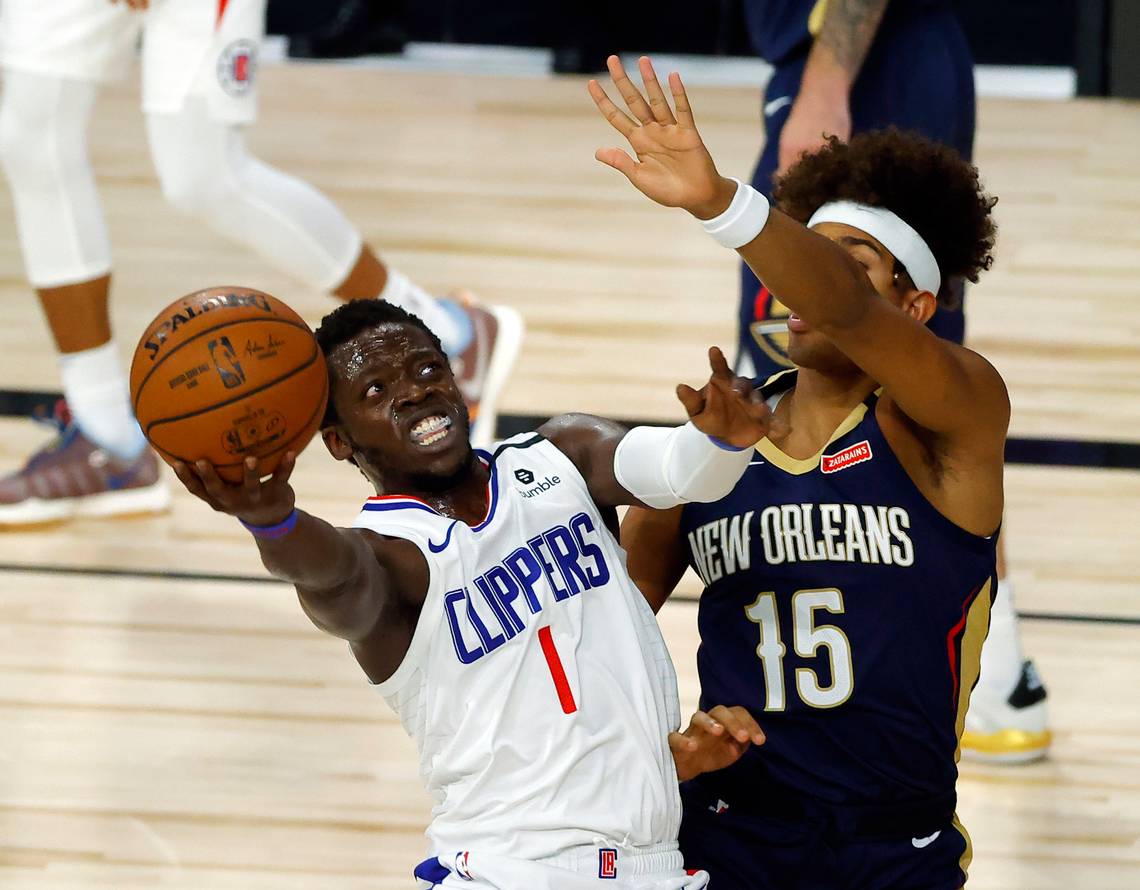 PACERS 127, 76ERS 121
T.J. Warren scored a career-high 53 points, Victor Oladipo added 15 after reversing course on opting out of the NBA restart and Indiana beat Philadelphia.
A sixth-year player acquired from Phoenix in an offseason trade, Warren was 20 of 29 from the field and 9 of 12 from 3-point range in his first game with at least 50 points.
The Pacers took control of the fifth seed in the Eastern Conference by breaking a tie with the 76ers and winning the season series. Both teams have clinched playoff spots.
Joel Embiid had 41 points and 21 rebounds for the 76ers. Tobias Harris scored 30 points, and Ben Simmons had 19 points and 13 rebounds.

THUNDER 110, JAZZ 94
Shai Gilgeous-Alexander scored 19 points, Chris Paul added 18 and Oklahoma City rolled past Utah in their first game of the restart.
The teams were to meet on March 11 in Oklahoma City, but everything changed when Utah center Rudy Gobert’s COVID-19 test came up positive right before the tip. That night, the NBA announced it would shut down indefinitely.
Steven Adams had 16 points and 11 rebounds, Danilo Gallinari added 15 points and the Thunder shot 53% from the field. Oklahoma City moved within a half-game of the Jazz for fourth place in the Western Conference standings and within 1 1/2 games of Denver for third.
Donovan Mitchell scored 13 points for the Jazz but shot just 5 for 15. Utah shot 39% from the field.

HEAT 125, NUGGETS 104
Jimmy Butler and Bam Adebayo each scored 22 points to help Miami beat Denver in the first restart game for both teams.
Heat center Meyers Leonard stood during the national anthem, saying it was out of respect for the US military, while all the coaches and players around him kneeled. His brother, Bailey Leonard, served two tours in Afghanistan with the Marines. Leonard wore a Black Lives Matter T-shirt over a jersey that said “Equality.”
Kelly Olynyk scored all of his 20 points in the fourth quarter for Miami, The Heat shot 56% from the field.
Nikola Jokic and Jerami Grant each scored 19 points for Denver. The Nuggets played without guards Jamal Murray (hamstring), Will Barton (knee) and Gary Harris (hip).

EuroLeague: Bayern come back 20 down to beat Fenerbahce