“I feel like it suits my voice more, somehow, or maybe because I learned French in school and I speak it just a little bit. And it sort of brings out my voice in a nicer color,” she added.

The singer made her debut in her home country in June 2019 at an event in Riyadh organized by the Ministry of Culture. Accompanied by the symphony orchestra of the Teatro Alla Scala Academy, Al-Bahiti opened the event with the Kingdom’s national anthem, sung in operatic style.
She received a standing ovation from more than 3,000 spectators.

“I was so nervous of course,” she said, adding: “It was my first public official performance on such a huge stage. And in Saudi, I mean, that was such a big deal for me … I mean, I was in my country and these are my people in front of me. And I stood there, and I was super, super proud to be there.”

Al-Bahiti, who received her bachelor’s degree in mass communications from the American University of Sharjah, has sung opera since 2008, performing several times in the UAE before returning to Saudi Arabia in 2011.

She fell in love with music as a child, teaching herself how to play guitar, and while in university, enrolled in a choir singing course. Her professor at the time, who was also the conductor, recommended that she train as an opera singer. “Of course, that came to me as a great surprise,” she said, adding: “I didn’t think that, oh, I’m the first Saudi or anything. I just thought, how can I even sing opera?”
While she began developing her professional vocal skills after university she had day jobs, including working as an assistant brand manager for Lipton Green Tea at Unilever between 2012 and 2015, and as an assistant production manager at the Saudi Airlines Catering Co. in Jeddah between 2017 and 2018. She also owns the Jeddah-based company La Mamma Catering.

“For eight years I was struggling,” Al-Bahiti said. “I couldn’t do anything. I couldn’t call myself an opera singer or perform or do anything about it because it wasn’t going to be accepted,” she added.

All that changed with an invitation from the Minister of Culture to sing at last year’s event.

“I mean, it all happened so quick,” she said. “It was arranged in a matter of 10 days or less that they saw me in an immediate interview that I appeared on and called me after that. But the fact that they give all the support and they made it happen … honestly, it gave me such a sense of pride and only more excitement and inspiration to continue and carry this forward.”

This, of course, would not have been possible without the changes of Vision 2030, which have not only brought live music performances back to the Kingdom’s stages, but also given women a more public role. 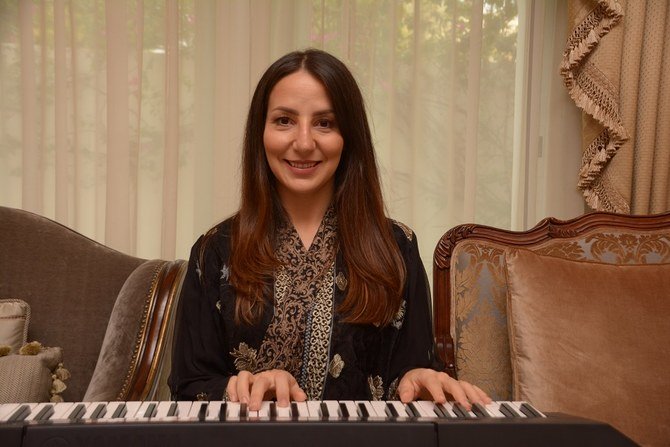 “All of that changed everything,” Al-Bahiti said, adding: “It gave us all the courage to go and follow our dreams and support our country and what they’re doing. Before Vision 2030, my family would be concerned that I would appear anywhere singing.”
In the same way Al-Bahiti’s professor once inspired her, the singer now tries to inspire others through teaching.

“I see a very bright future for our Saudi Arabia in leading the field of opera in the Middle East because we are aspiring to add to the opera, not just take part in it. We are aspiring to be, to add our own identity to it. And this is what we are working on now … and we look forward to great success.”

Now that she has an opera career of her own, does Al-Bahiti have any words of advice for future aspiring singers in Saudi Arabia?

“Nothing is impossible,” she said, adding: “If you follow your dreams, if you plan for it, if you set goals for your dreams, nothing is going to stand in your way. And most importantly, you have to keep your identity intact. You have to show your identity and your art. So make sure you keep your art going and shine. It’s so bright to the world.”

The Addictive Joy of Watching Someone Listen to Phil Collins