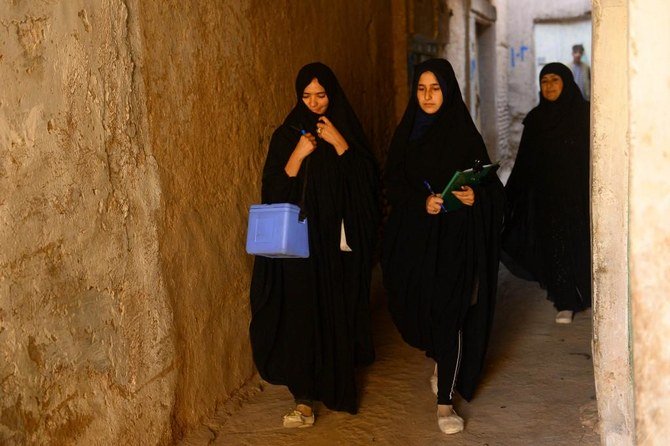 Afghan health officials are urging women to delay plans to become pregnant during the coronavirus outbreak or until a vaccine is available to treat the deadly disease.
Akmal Samsor, a Ministry of Public Health official, told Arab News on Saturday that couples are being advised to space their next pregnancy because pregnant women are five times more likely than other women to be hospitalized in intensive care units.
The move follows a public awareness campaign launched by the ministry on July 1, advising couples “about the use of family planning methods to avoid pregnancy during the COVID-19 pandemic,” according to ministry spokesman Masooma Jafari.
In one of the videos posted on the ministry’s social media page, Dr. Homaira Ayoubia talks to couples about the “gravity” of the COVID-19 crisis, warning that the dangers involved are “much greater for pregnant women than nonpregnant women.”
Ayoubia said: “Bring a necessary gap for the next round of pregnancy so that you and your child become immune.”
The warning was issued as the country remains in lockdown with 34,366 infections and almost 1,000 deaths recorded as of Saturday. Women make up 22 percent of the total fatalities.
Almost 1 million children are born in Afghanistan every year, adding to pressures faced by the health-care system in the war-torn country, which has an estimated population of 33 million.
With almost 3 million people dying in the almost four decades of war, many Afghans prefer to have more than one child.
Afghanistan’s health facilities are considered to be extremely poor, with official data showing that more than $300 million is spent in medical tourism by Afghans seeking treatment abroad, mostly in India, every year.
The coronavirus outbreak has added to the pressures faced by the health-care system and the government, which has come under sharp criticism for its mismanagement of COVID-19 funds.
Since the outbreak and subsequent lockdown in March, the UN Population Fund (UNFPA) said that an estimated 450 million women, from across the world, were either using contraceptives or avoiding visiting health facilities due to a fear of contracting the virus.
“The COVID-19 pandemic, as well as social distancing and other strategies to reduce transmission, is anticipated to affect the ability of these women to continue using contraception,” the UNFPA said in its findings published in April.
“Clinical staff occupied with the COVID-19 response may not have time to provide services, or may lack personal protective equipment to provide services safely. Health facilities in many places are closing or limiting services,” it added.
Afghan doctors say the ministry’s directive is a step in the right direction.
“Access to services for pregnant women is a concern during the pandemic. An increase in the number of births while access to services is limited could increase maternal and newborn mortalities,” Homa Jalil, a gynaecologist at a government run-hospital, told Arab News.
Others suggest the government needs to do more to safeguard public health.
“There is a high risk factor for pregnancy in Afghanistan, and serious preventive steps are needed to reduce the risk,” Mohammed Nawrooz Haqmal, an Afghan health expert based in the UK, said.
He doubted many will follow the advice of the ministry to delay pregnancy since instructions on the lockdown had been widely ignored in recent months.
Ministry spokesperson Masooma Jafari voiced the same concern.
“We cannot be certain that people will follow the advice. However, we shouldn’t ignore the effect of awareness programs on people. The ministry will do its best to advise people on the consequences of pregnancy during the crisis and provide services to pregnant women,” she said.

The power of touch: I wasn't able to hold my daughter until she was three days old