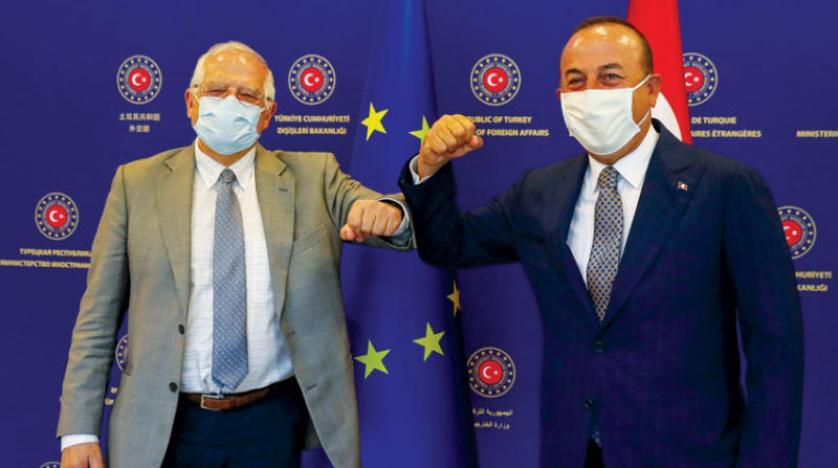 The current situation is not ideal for discussing Turkey’s membership in the EU, Borrell noted, stressing the importance of restoring stability and peace in Libya.

The EU Chief affirmed that diplomacy is the only way to achieve security in the Mediterranean.

Turkey is a key partner to the EU and is a candidate country for accession, Borrell said, adding that “the EU’s relationship with Turkey has become one of the most important and pressing issues of its foreign policy.”

Cavusoglu, for his part, asserted that Turkey will respond with its own steps if the EU imposes further sanctions on Ankara.

“If the EU takes additional decisions against Turkey, we will have to respond to this,” Cavusoglu told the news conference.

Cavusoglu called on the EU to engage in a serious dialogue on all outstanding issues, demanding it to be an “honest broker” in disputes between Ankara and EU member states France, Greece, and Cyprus.

The FM affirmed that his country has fulfilled all the necessary conditions to access the EU, noting that Turkey’s “accession has mutual benefits for both parties.”

Borrell’s talks in Ankara comes a few days before the significant debate at European Member States Foreign Affairs Council, scheduled to take place on July 13 to discuss relations with Turkey upon France’s request.

France’s foreign minister said last week that new sanctions on Ankara could be considered in addition to steps taken over Turkey’s drilling in the Cyprus economic zone.

The Turkish FM pointed out that his country is ready to hold talks and cooperate with all countries of the Eastern Mediterranean, including Greece, excluding Cyprus.

“As long as we are all partners in this sea, we must realize the blessing of sharing its resources.”

As for the refugee crisis, Cavusoglu said his government is moving forward with its policy of not preventing refugees who want to seek asylum through its lands, stressing that “this is not a threat”

Ireland's health service IT systems shut down by ransomware attack