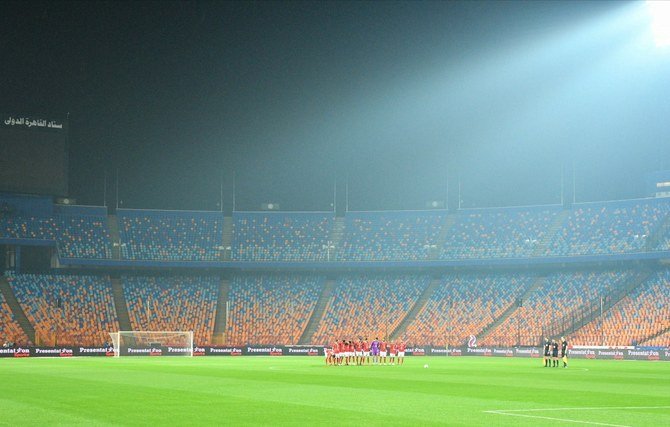 The start of August will see the Egyptian Premier League become the latest football competition to resume the 2019-20 season after the interruption brought about by the spread of the Covid-19.

The league had been suspended since March 14, 2020 as fears of pandemic brought almost all sporting competitions around the world to a halt. Days earlier, it had been announced that the league would carry on behind closed doors, but that decision was quickly amended to suspend all matches indefinitely as the gravity of coronavirus spread became apparent.

But now football fans in Egypt can at last have something to look forward to, albeit through their television screens.

On Thursday, director of the Egyptian Football Association’s Competitions Committee Hossam El Zanaty announced that the season will now be completed over two periods, the first from Aug. 7 until the end of the month, and then from the start of September until completion of the season.

Unlike the UAE’s Arabian Gulf League, which was voided, but like the Saudi Professional League which restarts on Aug. 4, the Egyptian League will now provide a title-winning team, qualifiers to the continent’s Champions League, and relegation and promotion resolutions.

The timing of the return inevitably means there will be a knock-on effect on the start of the 2020-21 season. Egypt’s football calendar, like most nations, runs from August to May, and this announcement means that the forthcoming campaign will now be completed deep into the summer.

There is also the matter of playing out the remainder of the Egypt Cup competition, currently at the round of 16 stage, and any potential continental (CAF) competitions.

One thing that would have made the decision to restart in August easier is the recent announcement that the Africa Cup of Nations in Cameroon, scheduled for a January 2020 start, and running for a month, has now been postponed until the following year. With that particular disruption to the African domestic leagues - not to mention to many Asian and European teams with Egyptian players - no longer a factor, individual country associations will have more leeway to find the best solutions to complete their disrupted campaigns.

But while many league competitions around the world were comfortably over the halfway stage, and as such could be completed by squeezing the postponed matches over a period of several weeks, the Egyptian league was, for the majority of clubs, just 17 match days into a total of 34.

Currently, Al Ahly, who have won the league a record 41 times, lead the Egyptian Premier League table with 49 points from 17 matches, and remain on course for yet another comfortable championship triumph. Al Mokawloon Al Arab (Arab Contractors) in second are a distant second with 33 points from an extra match. Pyramids FC are in third with 32 points, also from 18 matches, while Zamalek, Al Ahly’s historic Cairo rivals, are a point behind in fourth (from only 16 matches played).

One aspect in which the Egyptian League will be familiar with would be the hosting of matches behind closed doors over the last eight years, though under vastly different circumstances.

Following the Port Said Stadium disaster in 2012, which saw the death of 72 Al Ahly fans in a riot after a match against Al Masry, a blanket ban on supporters watching league football was implemented by Egypt’s Ministry of Sports.

Three years later, 19 Zamalek fans were tragically killed after clashes with police as they attempted to force their way into a league match against ENPPI.

In 2018, the ban was eased somewhat to allow 5,000 fans to attend league and cup matches, while the public was allowed Egypt’s international matches and any club matches against other African teams.

Now, for health concerns, fans will once again have to bide their time before it is safe enough for them to return to football grounds.

Egypt has been one of the hardest hit African nations by the coronavirus pandemic, with a total of just under 75,000 recorded cases resulting in 3,280 deaths at last count by the World Health Organisation (WHO), while there has been just over 20,000 recoveries.

The return of the Egyptian Premier League will hopefully coincide with a drop in those numbers, and signal a return of some sort social normality to the country, and not just for its football fans.