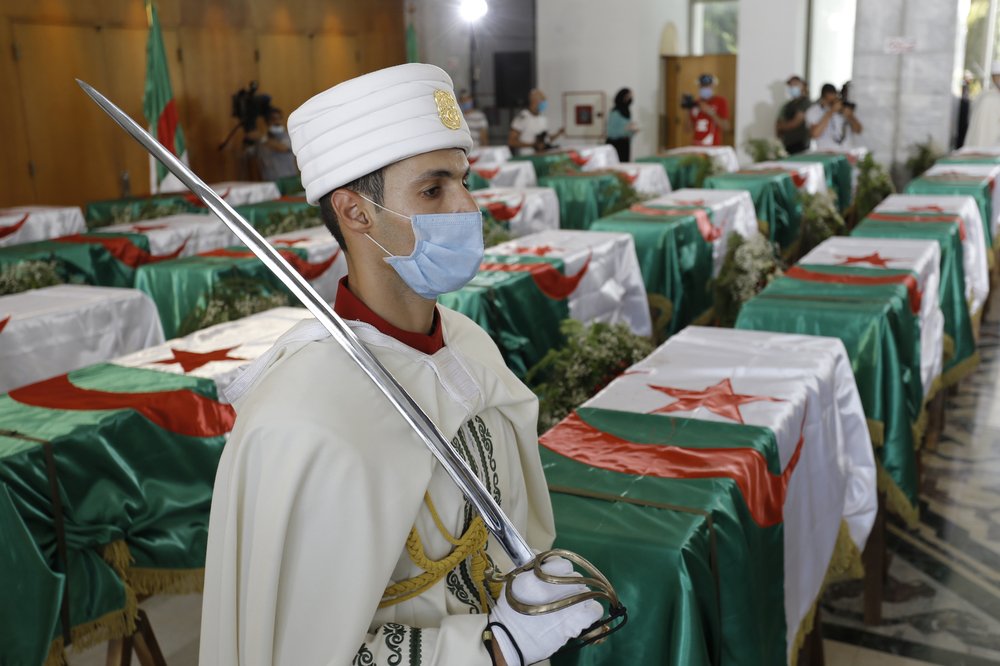 Algeria at last buried the remains of 24 fighters decapitated for resisting French colonial forces in the 19th century, in a ceremony Sunday rich with symbolism marking the country’s 58th anniversary of independence.

The fighters’ skulls were taken to Paris as war trophies and held in a museum for decades until their repatriation to Algeria on Friday, amid a growing global reckoning with the legacy of colonialism.

“We have already received half-apologies. There must be another step,” he said in an interview broadcast Saturday with France-24 television. He welcomed the return of the skulls and expressed hope that French President Emmanuel Macron could improve relations and address historical disputes.

Tebboune presided over the interment of the remains Sunday in a military ceremony at El Alia cemetery east of Algiers, in a section for fallen independence fighters. Firefighters lay the coffins, draped with green, white and red Algerian flags, in the earth.

The 24 took part in an 1849 revolt after French colonial forces occupied Algeria in 1830. Algeria formally declared independence on July 5, 1962 after a brutal war.

Algeria’s veterans minister, Tayeb Zitouni, welcomed “the return of these heroes to the land of their ancestors, after a century and a half in post-mortem exile.”

Algerians from different regions lined up to pay respect to the fighters on Saturday, when their coffins were on public display at the Algiers Palace of Culture.

Mohamed Arezki Ferrad, history professor at the University of Algiers, said hundreds of other Algerian skulls remain in France and called for their return, as well as reparations for French nuclear tests carried out in the Algerian Sahara in the early 1960s.