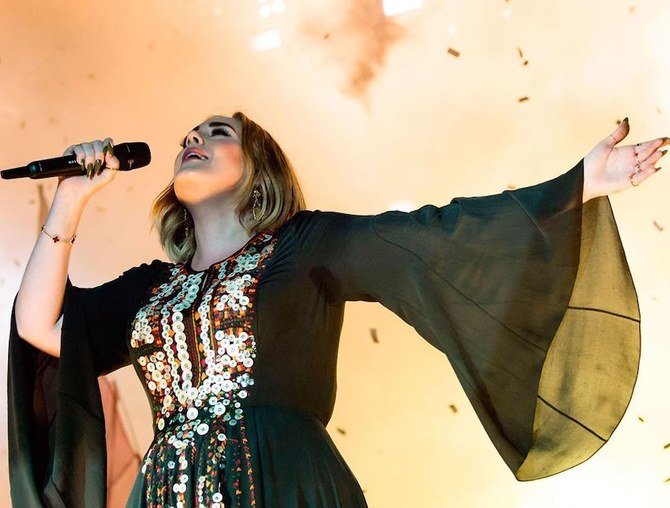 British singer Adele decided to take a trip down memory lane this weekend as she re-watched her epic performance from the Glastonbury Music Festival back in 2016. The 32-year-old hitmaker posted a blurry snap of herself on Instagram rocking out in her living room to the epic 15 song set donning the exact same kaftan she wore during the performance.
Wearing the custom, heavily-embellished kaftan by Chloé, the singer was a sight to behold. The dress, which was designed by the Parisian fashion houses’ then designer Clare Waight Keller – later responsible for Meghan Markle’s Givenchy wedding dress – looked just as glamorous on the singer as it did four years ago.

Fans were absolutely obsessed with the intricately-embroidered dress, which took 200 hours to create, during the time. Though the deep-green silk georgette ensemble bears a striking resemblance to the traditional wedding dress famous in the Egyptian oasis Siwa, Weight Keller revealed that the design was inspired by the ‘60s and ‘70s era.

“I grew up in that era and I think it’s something that still has a massive influence in the brand; it has always dipped into that spirit. It’s a sentiment which blends perfectly with Paul’s styling strategy for the Someone Like You singer,” said the designer in a past interview with The Telegraph.

British rapper Skepta, who is widely-rumored to be dating the “Hello” singer, indicated that he was the one who had shared the images with a comment from his own account. “Finally got your Instagram password lol,” he wrote.

The singer responded with a winking face emoji and a black heart, further fueling romance speculations.

This weekend was supposed to be the date of the 2020 Glastonbury Festival, which was cancelled due to the coronavirus pandemic.

Paul McCartney, Taylor Swift and Kendrick Lamar were set to headline the concert.