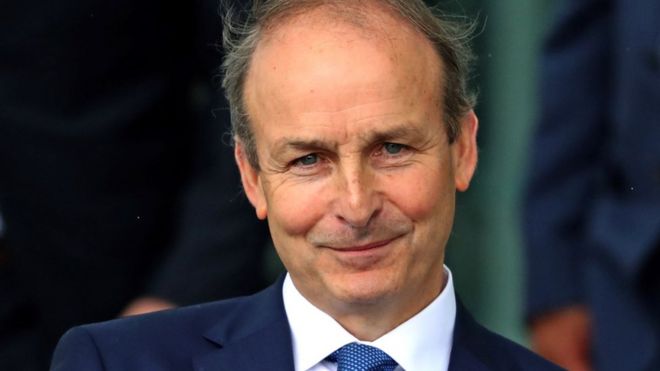 The 59-year-old Cork native has been the leader of the Fianna Fáil party since 2011.

He will lead a three-party coalition consisting of Fianna Fáil, Fine Gael and the Green Party.

It is the first time in history that former Civil War rivals Fianna Fáil and Fine Gael have governed together.

Mr Martin is expected to lead the country until December 2022 before handing back over to Leo Varadkar, the Fine Gael leader.

In his acceptance speech, Mr Martin said that to be elected to serve as taoiseach was "one of the greatest honours which anyone can receive".

"I am humbled by the responsibility and I pledge to work night and day with my partners in government to realise the great potential of our nation," he said in his first tweet as taoiseach.
Mr Martin has been a member of the Dáil (lower house of Irish parliament) for just over 30 years.

He served as cabinet minister in several Fianna Fáil governments from 1997 to 2011 and his roles included minister for foreign affairs; health; education as well as enterprise, trade and employment.

As health minister in 2004, he became the first national government minister in any part of the world to introduce a workplace smoking ban, which also banned the public from lighting up in pubs.

2020 Election Profile: Fianna Fáil's Micheál Martin
Mr Martin was elected taoiseach by members of the Dáil in a special sitting on Saturday.

The vote took place at the Convention Centre in Dublin, rather than its traditional home at Leinster House, due to Covid-19 social distancing rules.

A majority of 93 members of the Dáil voted in favour of him taking the role, while 63 members voted against him.

Today @MichealMartinTD was sworn in as the 15th Taoiseach of Ireland, by @PresidentIRL Michael D Higgins at Áras an Uachtaráin. pic.twitter.com/wufsKs1oz5

Mr Martin was later presented with his seal of office by Irish President Michael D Higgins at the president's official residence, Áras an Uachtaráin, on Saturday afternoon.
Mr Martin appointed a new cabinet on Saturday evening, dividing the roles between all three parties.

Fine Gael leader Leo Varadkar is now the tánaiste (deputy PM) as well as minister for enterprise, trade and employment.

Ireland's health service IT systems shut down by ransomware attack