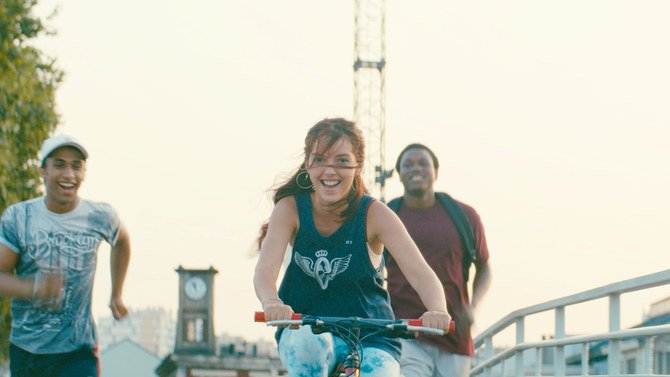 A home is not just bricks and mortar but a place where memories are made — of one’s childhood, one’s joys, and yes, sometimes one’s sorrows.
One of 56 official titles selected by the Cannes Film Festival, which was canceled this year because of the coronavirus, was “Gagarine,” screened at the Cannes Market on a virtual platform from June 22-26.

Directed by debutant Fanny Liatard and Jeremy Trouilh, “Gagarine” is a bittersweet French story of a housing complex on the outskirts of Paris. Inaugurated and named after Russian cosmonaut Yuri Gagarin, the complex is found to be in a state of disrepair and faces demolition.
But 16-year-old black teen Yuri (played charismatically by newcomer Alseni Bathily) refuses to leave. He has nowhere to go after his mother abandoned him. Yuri (probably named after the cosmonaut) is a good handyman, and with two friends, Houssam (Jamil McCraven) and Diana (Lyna Khoudri), tries to carry out repairs with secondhand materials before the inspection. He fails, but is inspired to recreate a spaceship in the building’s basement. Passionate about astronomy, he also has a telescope and great imagination to rebuild his place as a sci-fi model.

“Gagarine” is an apt commentary – a fictionalized account of a real incident – on how marginalized communities live on hope, struggling to survive against tremendous odds.
In many ways Yuri seems to embody the spirit of the community and the complex, and we see the beginnings of the boy’s passion for space when the directors include archival footage of Yuri Gagarin visiting the complex to the cheering of crowds, many of whom have been lifted from a miserable existence to live in the sky-high building.

There are lovely movements in the movie, in which the real and unreal merge, lending themselves into a “cockpit” romance between Yuri and Diana, where she finally notices life-saving Morse Code messages from him that she herself had once taught him.

Together with a superb score by composers Evgueni and Sacha Galperine, and Amine Bouhafa, “Gagarine” presents a hauntingly memorable picture of how the loss of a home sometimes be so traumatic. Had the festival not been sidelined by the coronavirus, “Gagarine” would have certainly created a lot of buzz.