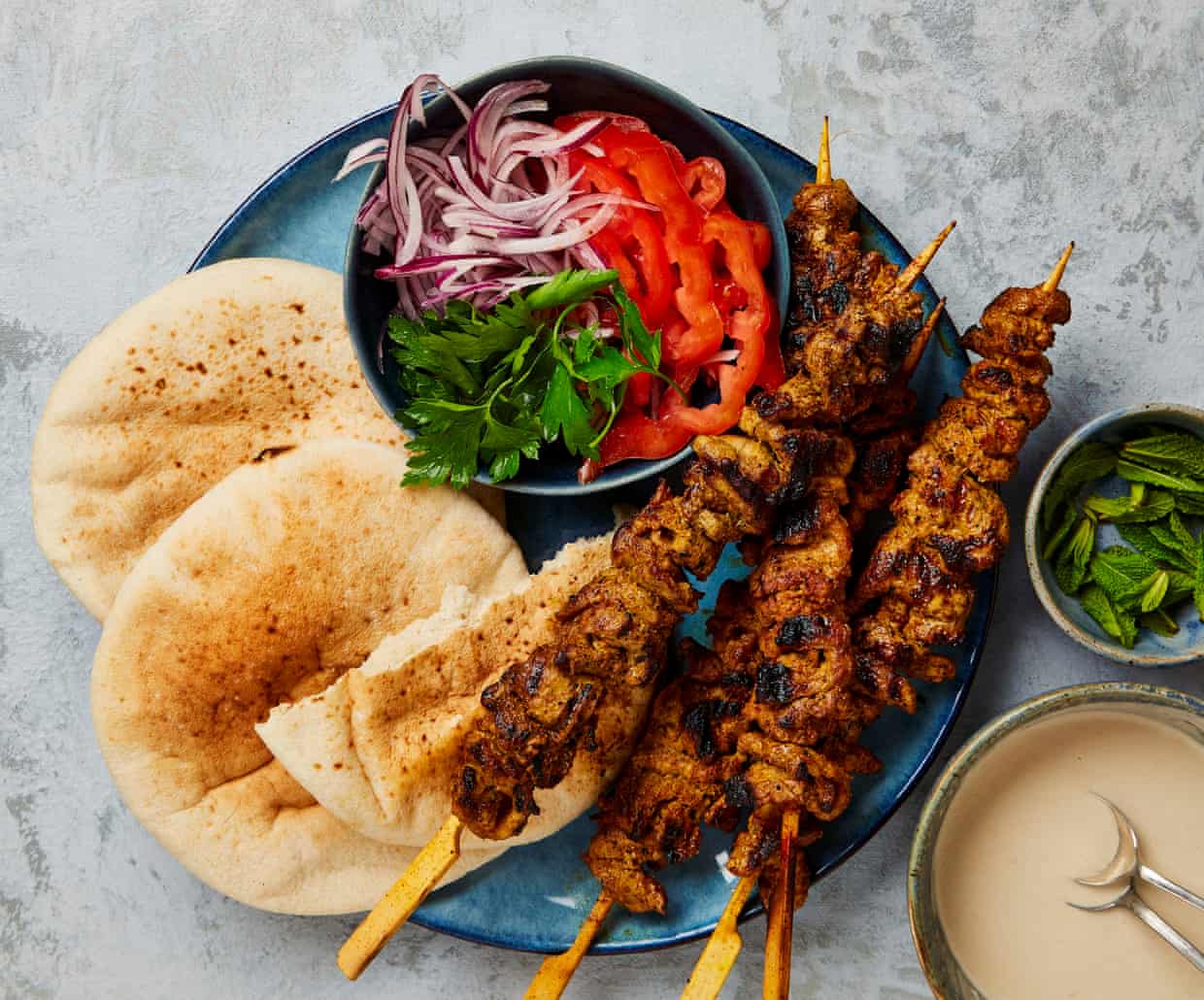 Grill marks make me happy. Aesthetically, contrasting black stripes are exciting to look at, but, beyond that, it is the association with smoke and fire, with outdoor barbecues and joyful gatherings, that creates a delightful experience. Recently, the usual script has been heavily edited, big gatherings now being a distant past and a faraway future, but that doesn’t stop me from wanting to re-enact the theatrics and fire up the grill, be that outside or on a griddle pan in my kitchen. The high heat adds flavour and maximum dramatic effect, while still keeping things fairly simple and, eyes closed, taking me to more radiant days.

Lamb shawarma (pictured above)
Time in quarantine has us craving some of our favourite guilty pleasures, one of them being late-night shawarmas. There is a bit of a craft involved in trying to emulate the traditional shawarma on a spit, but here is a DIY version. Feel free to build your shawarma as you like, using your veggies of choice. If you don’t have tahini, a simple garlicky yoghurt sauce or shop-bought hot sauce would work here, too.

Use a sharp knife to cut any larger pieces of fat off the lamb, but make sure to keep some fat on the meat. Cut the lamb into slices about ½cm thick and about 4-5cm long (if the joint is on the large side, cut it in half lengthways first) and put in a large bowl.

In a second bowl, whisk the spices, vinegar, oil, yoghurt, three-quarters of a teaspoon of salt and a good grind of pepper. Tip over the lamb and toss with your hands until the meat is well coated. Cover the bowl, put in the fridge and leave to marinate for at least two hours – ideally overnight, if you have time.
Whisk all the sauce ingredients, three tablespoons of water and a pinch of salt in a small bowl, until smooth and pourable.

Take the marinated lamb out of the fridge about 45 minutes before you want to grill it and skewer it on to four 23cm-long metal skewers (or four soaked wooden ones) and set aside.

Put a well-greased grill pan on to a high heat and, once smoking, grill the skewers (do this in two batches if your grill pan is on the small side) for seven to eight minutes, turning once halfway, until well charred in places and the lamb is just cooked through. Use a brush to baste the lamb a couple times with a little extra oil while it is cooking.

To serve, divide the pitta breads and lamb between four plates and let everyone build their own shawarma with their choice of herbs, vegetables and tahini sauce. 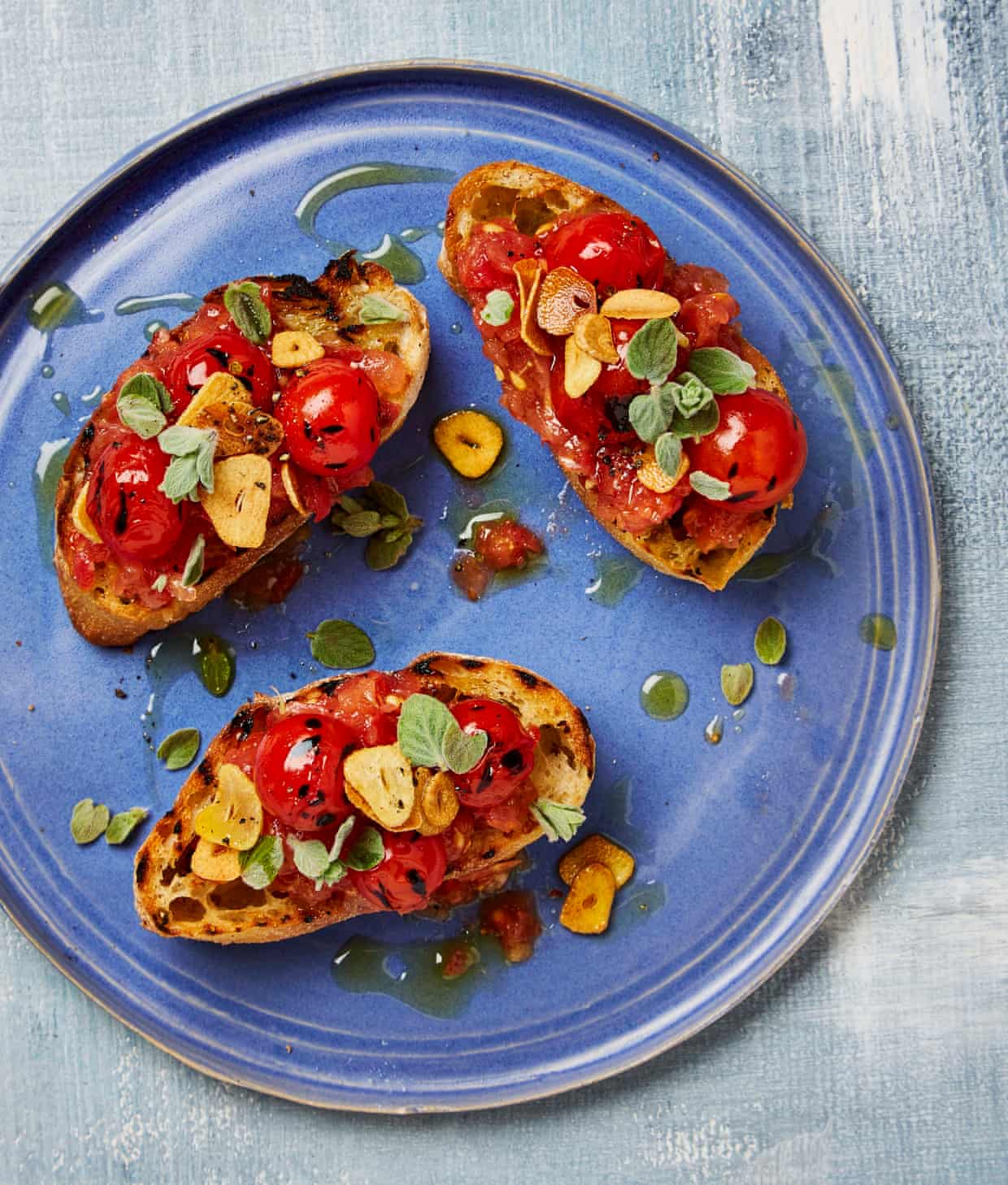 Grilled bread with tomato and fried garlic
Beautifully ripe tomatoes and some stale bread are all you need to make this quick and easy starter or side. Make this dish your own by swapping in other breads and herbs that need using up.

Put the sliced garlic and three tablespoons of oil in a small frying pan on a medium heat, cook for about eight minutes – until the garlic turns lightly golden – then strain through a small sieve set over a bowl to separate the garlic and its oil.

Use a box grater roughly to grate the tomatoes (discard the skins). Put the grated tomato flesh in a large sieve over a large bowl and leave to drain for about five minutes – you should end up with about 400g grated tomato pulp. Discard (or drink) the drained tomato liquid, tip the flesh into the now-empty bowl and stir in the crushed garlic, chilli, vinegar, the remaining two tablespoons of oil, three-quarters of a teaspoon of salt and a good grind of pepper.

Put a well-greased griddle pan on a high heat and brush both sides of the sliced ciabatta with a little olive oil, to coat. Once the griddle is hot, griddle the bread for about 90 seconds a side, or until nicely grilled and toasty (do this in two or more batches). Transfer the cooked bread to a plate or board, then grill the cherry tomatoes for about five minutes, until nicely charred and only just starting to burst.

To serve, lay the bread on a large plate, then spoon over the grated tomato so it coats the bread and also falls on to the plate. Top with the charred cherry tomatoes, the fried garlic and its oil, then sprinkle over the oregano and serve right away. 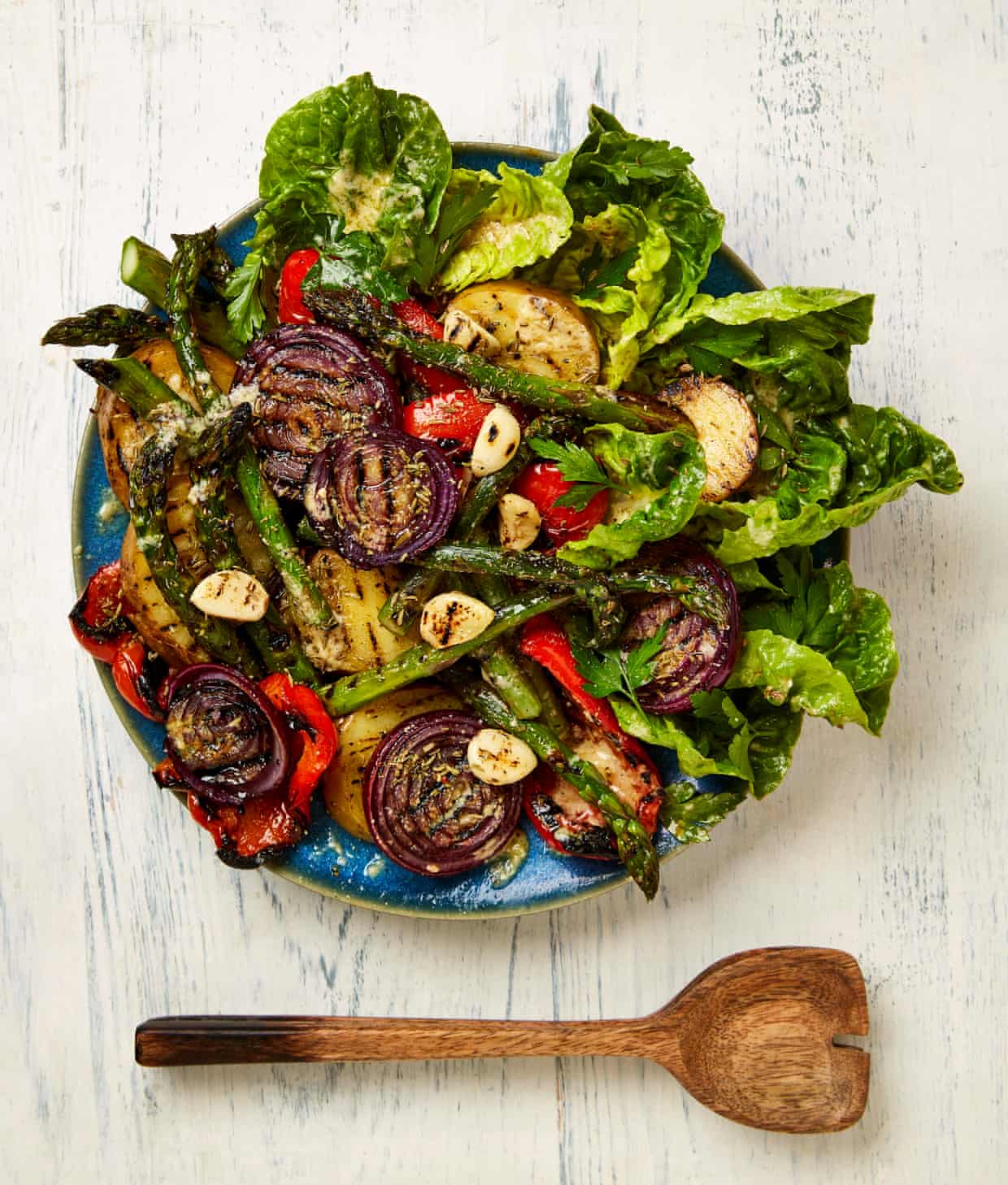 Grilled vegetables with mustard and parmesan dressing
Big plates of grilled vegetables never go out of fashion. The key is to treat each vegetable individually, giving it the love and attention it deserves. Use any vegetables you have to hand – mine are just a suggestion.

Put the potato, asparagus, peppers and onions in four separate bowls and toss each in a tablespoon of oil and a pinch each of salt and pepper.

Whisk all the dressing ingredients in a bowl with a quarter-teaspoon of salt and a good grind of pepper, until smooth and homogenised.

Put a well-greased griddle pan on a high heat and, once smoking, start grilling the vegetables separately. Lay in the peppers and cook for about 15 to 20 minutes, until nicely charred and softened. Transfer to a plate and, while the peppers are still warm, spoon over a little of the dressing and toss.

Now griddle the onions for four minutes on each side, until charred and softened, taking care to keep the rounds intact. Transfer to a second plate and spoon over a little dressing.

Next, griddle the potato slices for two minutes a side, until they have nice grill marks, transfer to a third plate and drizzle over a spoonful of the dressing.

Grill the asparagus (in two batches, if need be) for about seven minutes, until the spears have nice grill marks, but retain some bite. Transfer to a fourth plate and toss with a spoonful of the dressing to coat.

Finally, griddle the garlic cloves for two minutes, until nicely charred, and set aside.

Toss the gem lettuce and parsley in the remaining dressing and transfer to a large plate. Arrange the grilled vegetables on the same plate, sprinkle with the fennel seeds and serve warm or at room temperature.