In Asia, children are going back to school. But education in the time of coronavirus is not without difficulties 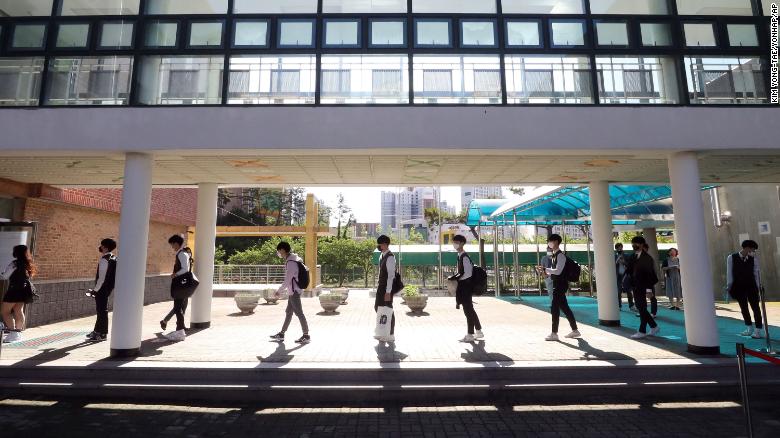 For the first time in three months, South Korean high school students are back in the classroom.

But in many ways, it's not schooling as usual.
As high school seniors returned to school Wednesday, they had their temperatures checked, wore masks on campus, and sat at desks that were spaced apart, in line with commonplace social distancing practices.
However, within hours of reopening, dozens of schools in Incheon, a city near the capital Seoul, were forced to shut again after two students tested positive for coronavirus.
South Korea -- which has reported more than 11,100 coronavirus cases and 264 deaths -- appears to have its outbreak largely under control. Now, the country is trying to get back to something approaching normal life.
But South Korea's experience shows that reopening schools doesn't mean a return to normal -- and carries continued risks.
Around the region, other countries that have managed to control their outbreaks are facing similar questions when it comes to education.
In New Zealand, which has been praised for its swift approach to controlling the outbreak, students around the country headed back to school on Monday after eight weeks at home. In parts of Australia, children are already back at school.
In China -- where the first coronavirus cases were reported last year -- students began going back to school in March, according to state news agency Xinhua. Earlier this month, the Education Ministry said that about 40% of students were back in the classroom.
It's a tricky subject -- even though coronavirus symptoms in children tend to be mild, some studies have suggested that kids can play a major role in spreading the virus to each other and to vulnerable adults, raising the risk of another wave of infections.
A new normal for classrooms
The experience of students in Asia Pacific shows that even when countries reopen schools, that doesn't mean a return to the old ways.
In South Korea, students aren't all heading back at once.
South Korea's students haven't been in the classroom since before the spring break in February.
Students normally go back to school at the start of March, but the start of the spring semester was delayed until early April, when students began the new school year with online classes.
Wednesday was the first day back for senior high school students, but students from other grades will be returning over the next few weeks. By June 8, students of all ages are expected to be back at school.
On Thursday, the country's Ministry of Education urged disease prevention inside and outside schools. 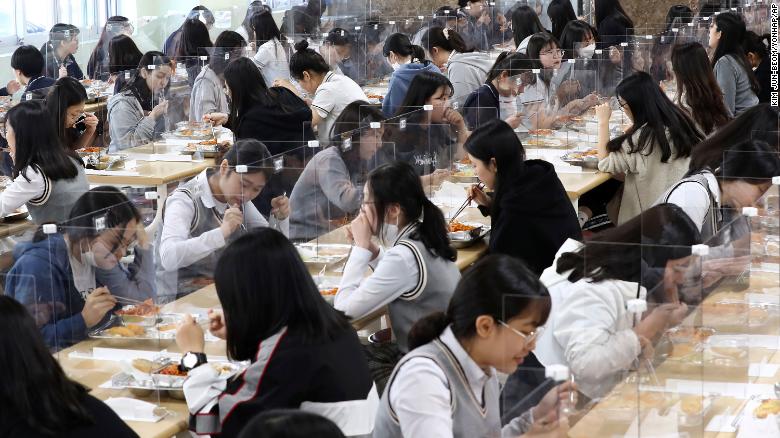 In New Zealand, schools put in place new hygiene rules -- such as hand sanitizing before entering campus -- and kept students spaced out in the classroom, according to Radio New Zealand.
Australia is so serious about hygiene that the government is providing an additional 10 million Australian dollars ($6.56 million) to help schools cover the cost of soap, hand sanitizer and classroom cleaning products.
The risk in going back
Getting children back into school is not without difficulties.
In South Korea, dozens of schools opened on Wednesday, only to close again after two students tested positive for coronavirus in Incheon, a city near Seoul. Those cases are believed to be connected with an outbreak in Itaewon, a nightlife district in the capital, which has been linked to more than 200 cases.
On Thursday, a high school in the South Korean city of Daegu sent students home and closed the school after a student tested positive, an official at the Daegu Metropolitan Office of Education said. According to the official, the student who tested positive was one of 17 who moved into the dorms a few days ago.
Korea Centers for Disease Control and Prevention (KCDC) deputy director Kwon Jun-wook said Thursday that schooling is something that must take place alongside disease prevention. "So we currently judge that it must continue in our current response regime, with the co-operation and participation of all our people," Kwon said.
On May 13, authorities in Jilin, a northeastern Chinese city in a province of the same name that borders Russia and North Korea, issued a notice that all resumed classes would switch to online as the area battles with a rise in new cases.
The risk in reopening after a lockdown is something experts and leaders around the region are well aware of.
China's top respiratory expert, Zhong Nanshan, told CNN last weekend that the country is still vulnerable to another wave of deadly coronavirus infections. "We are facing a big challenge -- it's not better than the foreign countries I think at the moment," he said.
And when New Zealand's Prime Minister Jacinda Ardern announced that the country was easing restrictions -- including allowing children to return to school -- she urged caution.
"We are asking you all to be incredibly careful as we get back to a new safer normal," she said on May 11. "None of us can assume Covid isn't with us."