Why Exercise Makes You Cough 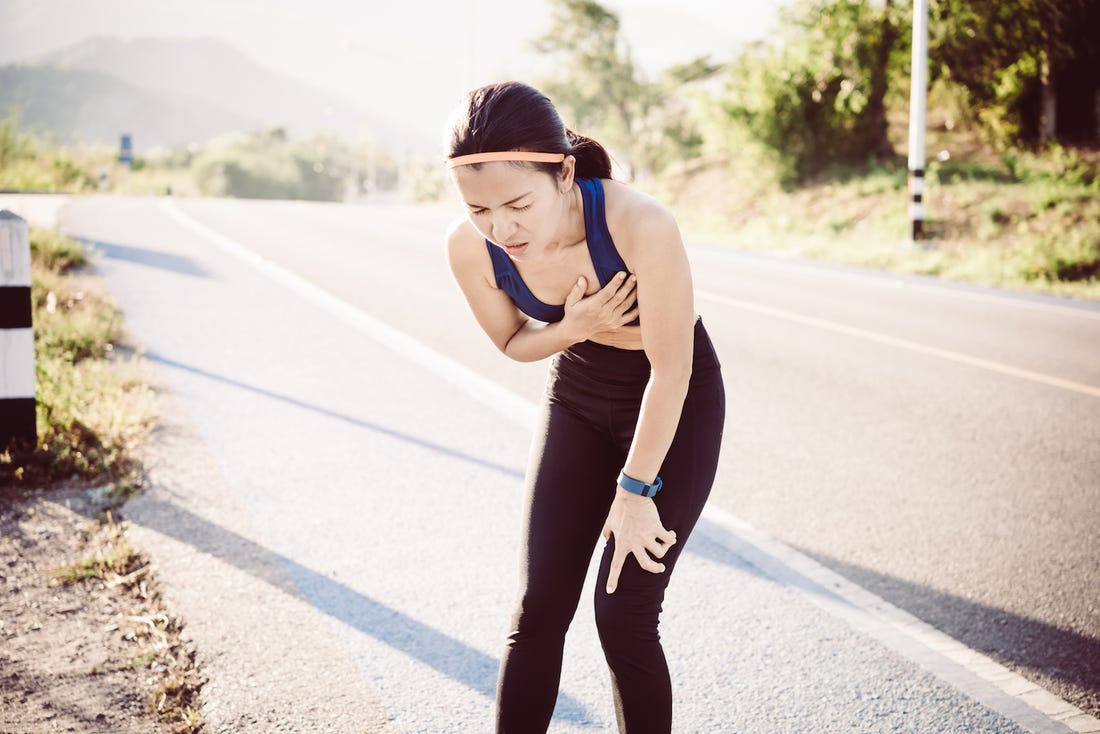 You had a great run. You sailed through the steady-state parts and even tackled the toughest moments of the set like a pro. All good, except...cough, cough, hack, what? Nothing can break your post-run euphoria quite like a coughing fit. But why are you hacking now when you breathed just fine during your workout?

Before you worry that your cough is a symptom of the novel coronavirus disease, COVID-19, consider this: Coughing during or after exercise is a common symptom of a condition called exercise-induced bronchoconstriction (EIB), which occurs when the airways in your lungs narrow temporarily in response to any kind of physical activity that revs up your heart rate. (To understand more about what a COVID-19 dry cough is like, check the information here.)

“This makes it more difficult for the air to get through into the lungs,” says Jonathan Parsons, M.D., director of the Ohio State University Multidisciplinary Cough Program.

It’s similar to what happens to your lungs during asthma. In fact, EIB used to be known as “exercise-induced asthma.” But unlike asthma, where attacks can be triggered by a variety of things like smoke, pollen, mold, pet dander, or viruses, EIB is sparked only by exercise.

Most asthmatics have suffered EIB symptoms during some point in their lives, says Dr. Parsons. So if you have asthma, you may already know exercise can cause some distress.

But EIB can affect up to an estimated 15 percent of the general, asthma-free population. It can be annoying and uncomfortable, but in many cases there are things you can do to prevent it from happening. Some are little tweaks you can make before your workout to keep your airways from rebelling and causing you to cough; others require a prescription. But whether your cough is severe or just a little bothersome, it's worth calling a doctor when symptoms develop—some other conditions can cause the same symptoms and you'll want to get the right diagnosis. Here’s how to spot the signs and get the right treatment for the condition.

How do you know if running is what's causing your cough?
Symptoms of EIB are nonspecific, meaning they’re similar to those caused by other conditions.

Common signs include shortness of breath, tightness in your chest, cough, wheezing, and difficulty getting air into your lungs. You might also feel like you have decreased endurance or abdominal discomfort.

The symptoms are often mild to moderate: You may just feel a slight wheeze or a bit of tightness in your chest—more of an annoyance than anything more serious.

But the attacks can also be severe, requiring you to stop what you’re doing to catch your breath. In some cases, you may even need to go to the emergency room to get your breathing back under control.

How much exercise does it take to bring the problem on?
Usually it takes about 10 to 15 minutes of exercise to provoke an EIB episode, Dr. Parsons says.

Any exercise that speeds up your heart rate can trigger the condition, though it’s much more common in endurance athletes, like runners, swimmers, and triathletes.

EIB can pop up after short, intense bouts of exercise as well, like sprinting or even circuit training without rest periods.

What else triggers coughing after running
The kind of air you breathe can play a role, too. EIB tends to flare more when the air lacks humidity, which is common on cold days. So that may be one reason why your outdoor runs leave you with a cough when there's a cold snap.

“Your lungs don’t like dry air,” says Dr. Parsons. “So the airways try to humidify it, and when they do, they become dehydrated. Dehydrated airways are irritable and much more likely to constrict or narrow.”

How do you know you have exercise-induced bronchoconstriction?
If you’ve been noticing symptoms of EIB, make an appointment with your primary care doctor. Simply taking medications on the basis of your symptoms alone can prevent you from knowing if you have the condition.

Your doctor will order a series of tests that measure your lung functions, says Dr. Parsons.

The first test assesses your lungs at rest. Then your doc will ask you to exercise on either a treadmill or a track, and take another resting test. If there’s a decline in your lung function after exercising, you may have EIB. 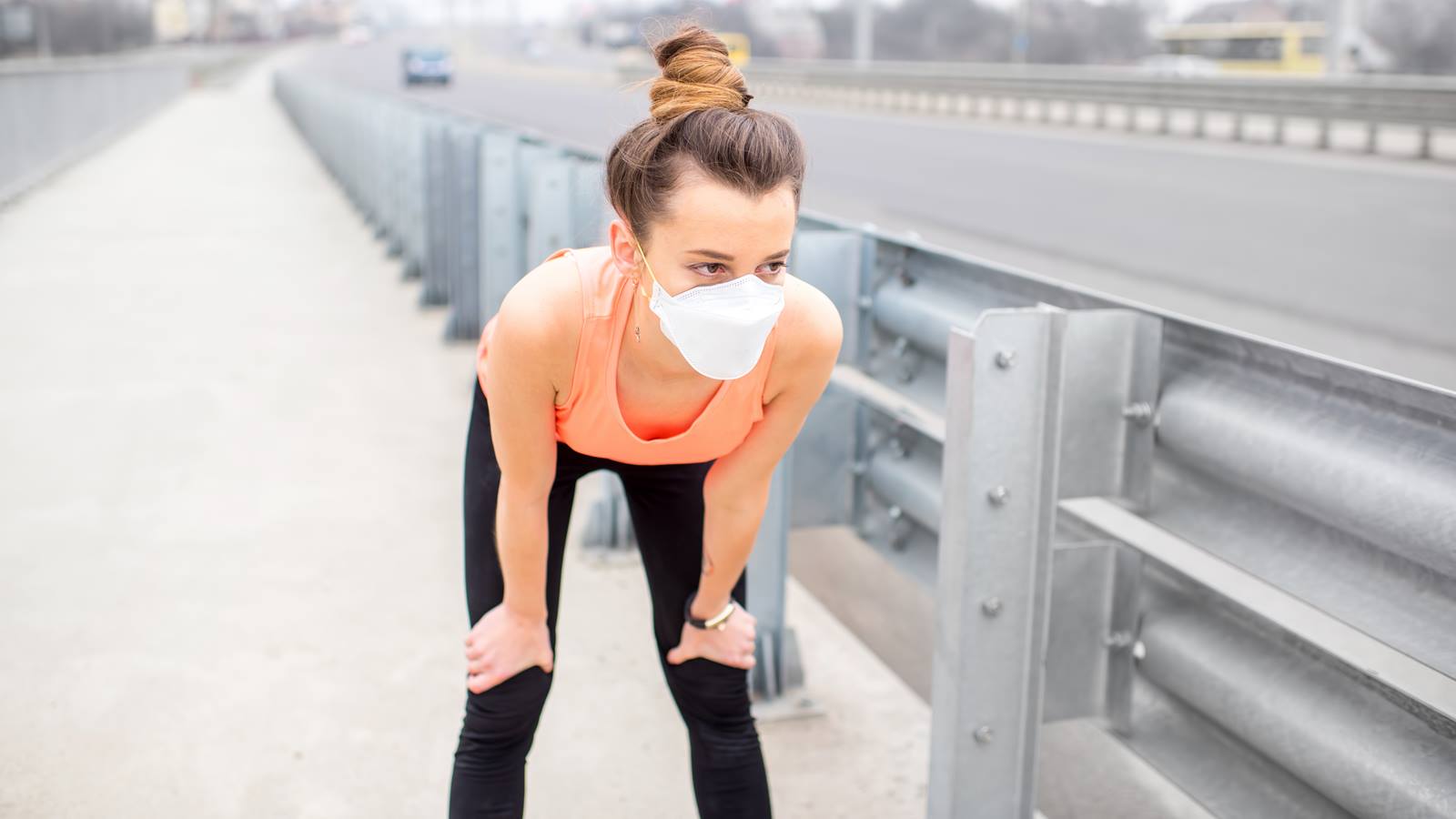 How do you treat that post-run cough?
Once you receive a diagnosis, you’ll probably be given a rescue inhaler like Albuterol, which helps you breathe better by relaxing and opening the airways that go to your lungs.

Take a couple puffs 15 to 20 minutes before starting exercise. Don't wait until you're done and the cough is flaring up.

The inhaler will help you prevent another EIB episode from occurring, instead of waiting for it to happen and then reacting to it, Dr. Parsons says. “It’s effective in about 80 to 90 percent of patients.”

The treatment should be enough to allow you to zip through a sweat session without any symptoms, but make sure to keep your inhaler handy during your workout just in case.

If you’re still feeling symptoms even after you take the Albuterol, your doc may start you on a daily inhaled corticosteroid, too.

He or she might also want to rule out other conditions that can cause similar symptoms, like vocal cord dysfunction, uncontrolled allergies, post nasal drip, or even acid reflux. Many people don’t realize that unexplained coughing can be a symptom of acid reflux (and even fewer know that taking care of that acid reflux might not mean giving up all the foods you love like coffee, citrus fruits, and tomatoes).

Are there ways to prevent that cough you get after running?
Whether you use an inhaler or not, don’t dive right into exercise (your joints will thank you for this, too). Research has shown that 10 to 15 minutes of moderately intense exercise can reduce the risk of EIB attacks from occurring afterward. The goal of this warmup is to raise your core temperature a little bit. That means walk or jog slowly before you break out in your full-on run, or spin in a small gear if you’re on your bike. In addition to reducing your chances of coughing after running, this also helps warm up the synovial fluid in your joints so they’re better ready to serve you in a tough or steady-state mainset.

And if you’re going to run outside in cold, dry air—less than 32 degrees Fahrenheit—consider wearing a mask or a scarf to help your lungs out, says Dr. Parsons.

“When you put a scarf around your mouth, it’ll get a little moist as you breathe,” he says. “That will help humidify the air and warm it up as well.”