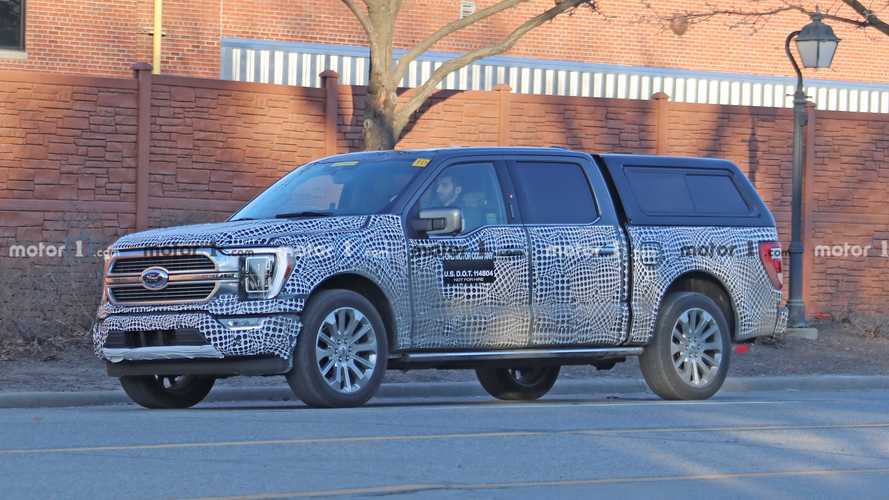 As we’re getting closer and closer to the world reveal of the highly anticipated 2021 F-150, new details are emerging about Ford’s hugely popular truck. While spy shots have revealed the exterior design changes will be rather evolutionary, some big modifications are bound to take place inside the cabin. According to a new report published by Car and Driver, Ford is planning to make the interior nicer in an attempt to better rival the fancier cabins offered by the latest Ram 1500.

For some of the higher-end trim levels – Limited, King Ranch, and Platinum – Ford will install upgraded materials and trims. The areas you’ll be touching the most will feel nicer, and there’s also going to be more tech than ever before. C&D is reporting an 8-inch touchscreen will come as standard equipment, with a massive 15.5-inch infotainment to cost extra. If that generous diagonal seems familiar, it’s because the Blue Oval announced such a system would be available when the company debuted SYNC 4 at the end of October last year. Speaking of which, both the small and bigger setups will run on the company’s latest and greatest infotainment software.
The new report about a massive touchscreen dominating the center console does not come as a big surprise since Bloomberg said back in September 2019 the F-150’s central display would significantly grow in size. That seems to be the trend nowadays in the automotive industry as more and more companies are moving away from physical buttons and knobs to integrate their respective functions in larger screens.

C&D also has details about what will power the fourteenth generation of America’s massively popular truck. Much like that leaked VIN decoder document suggested, the plug-in hybrid version featured here as a disguised prototype will combine a V6 engine with an electric motor. The report claims it’ll be a turbocharged mill hooked up to a 10-speed automatic transmission, with an unknown battery pack providing an electric range of more than 10 miles (16 kilometers) as long as the bed is empty.
The same transmission will be linked to a total of four V6s, from a naturally aspirated 3.3-liter unit to 2.7- and 3.5-liter twin-turbo gasoline engines, plus a turbodiesel 3.0-liter. As previously reported, the range-topping Raptor version is rumored to grab the supercharged 5.2-liter V8 engine from the Mustang GT500 where it makes 760 horsepower to better compete with Ram’s forthcoming Rebel TRX.

Ford hasn’t said when it will unveil the 2021 F-150, but it did tell us the premiere is not scheduled to take place on April 29 as some have reported. C&D has it on good authority the world debut is programmed to take place sometime in June. Naturally, the Dearborn-based automaker won’t come out with the big guns right away, so those eager to see the Raptor will have to wait some more.