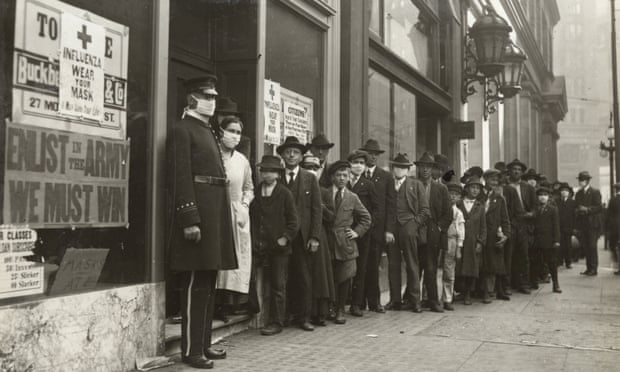 Sometimes the parallels between this pandemic and previous ones are uncanny.

Take hydroxychloroquine, the anti-malarial drug that regulatory agencies all over the world are now hastily authorising for the treatment of hospitalised Covid-19 patients. Outside hospitals, Donald Trump and the Brazilian president, Jair Bolsonaro, have expressed enthusiasm for the drug, people are breaking social distancing rules to get it, and there have been cases of poisoning due to inappropriate self-medication.
The run on hydroxychloroquine is the result of a small trial being conducted at a hospital in Marseille that, though promising, has not yet provided the required standard of proof that the medicine works for Covid-19 – let alone information about when it works, or in what doses. Larger trials of this and other treatments are under way, but won’t report even preliminary findings for another week.
In 1918, in the midst of the worst flu pandemic in history, doctors all over the world prescribed quinine, another anti-malarial drug, even though there was no evidence that it worked for flu. At that time there was less understanding of how a drug interacted with the body, and they often over-prescribed it, causing side effects such as vertigo, tinnitus and vomiting. In his book about the British experience of the 1918 flu, Living with Enza, Mark Honigsbaum reports that Londoners refused to be fobbed off with advice to gargle with saltwater, and besieged chemists and doctors’ surgeries demanding quinine.

Plus ça change. But the deeper truth revealed by these examples is that in a crisis, it’s not only politicians who are forced to make ethically loaded decisions; doctors and scientists are, too. In an ideal world, the scientists would furnish the facts and the politicians would weigh them against other facts and make decisions. The politicians would shoulder the ethical burden. But we don’t live in an ideal world, and that division of labour is an illusion.

As the philosopher David Kinney of the Santa Fe Institute pointed out this week, scientists rarely have all the facts in a crisis. The best they can offer is a range of possible outcomes with probabilities attached, and sometimes that range is so broad it’s next to useless for a policymaker – so the scientist is forced to step out of her comfort zone and narrow that range based on criteria other than evidence. She makes ethical choices of her own, in other words. That’s why now, as in 1918, you see scientists castigating each other in the media. “This is insane!” one scientist tweeted recently, about the Marseille study.
In that study, which is ongoing, Covid-19 patients are treated with a combination of hydroxychloroquine and an antibiotic, azithromycin. Hydroxychloroquine is a less toxic form of chloroquine, one of the most widely prescribed drugs in the world. Azithromycin is commonly prescribed for bacterial pneumonia, a potential complication of Covid-19.

The combination – and, just as importantly, the doses being used in Marseille – have been reported to be safe in other patient groups. It is not yet known how safe they are in this one. There are hints the combination could have a cardiotoxic effect in some patients, so the doctors in Marseille screen all patients with an electrocardiogram before they treat them.

To date, they have published results on 80 patients. They report reductions in viral load – meaning the patients are infectious for a shorter time – and improvement in symptoms, compared with Covid-19 patients hospitalised elsewhere. Their reports were initially posted on the hospital’s website, in English, before being peer reviewed. The numbers are far too small, by normal clinical trial standards, and some have highlighted inconsistencies in those reports. Most egregiously of all, critics say, there is no proper control group – no group of age- and sex-matched patients who do not receive the treatment and who are monitored under the same conditions. Didier Raoult, the doctor leading the study, says it would be unethical to have one in a situation where people are fighting for their lives, his staff are risking theirs to save them, and there are no other really effective drug options.
Raoult directs France’s leading centre of excellence in infectious diseases and is among the most highly cited scientists in the world in his domain. He knows that in proclaiming that his treatment works, he has made an ethical and not an evidence-based decision. In Le Monde last weekend he effectively reminded his fellow doctors that their first duty was to their patients, not to the scientific method. He believes, simply, that time will prove him right.

It may do. But when Sir Arthur Newsholme, the chief medical officer of the UK’s local government board, made an ethical decision in August 1918, it turned out to be the wrong one. The first, mild wave of that pandemic had receded, and the first world war was entering its final phases. He decided to shelve plans for fighting a predicted second wave on the grounds that the war effort took precedence. Within a few weeks, Honigsbaum recounts, the flu had returned with a vengeance.

“Politicians are judged by history,” Raoult told me. “I will be judged by my patients.” That may be his mistake. Ours would be to think that our governments and the scientists advising them aren’t making ethical decisions all the time, in this crisis. The decision to restrict testing to hospitals – like the one to advise elderly people to stay at home before declaring a general lockdown – were partly ethical. They couldn’t have been anything else. If the scientists had all the answers, we wouldn’t be where we are.

How the pandemic in US compares with rest of world