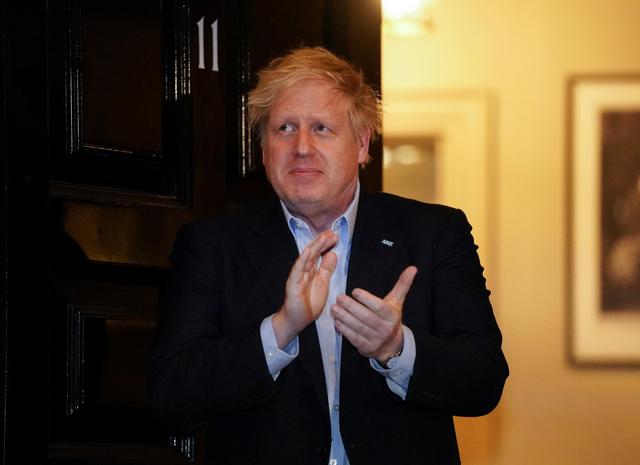 British Prime Minister Boris Johnson said on Friday he was remaining in isolation with mild symptoms of COVID-19, including a raised temperature, seven days after he first tested positive for the new coronavirus which causes the respiratory disease.

With the country nearing the end of its second week in lockdown, the UK death toll rose by nearly 700 to 3,605 and the National Health Service (NHS) said two nurses in their 30s had died of the disease.

Queen Elizabeth will address the nation on Sunday, Buckingham Palace said, only the fifth time she has done so other than at Christmas during her 68 years on the throne.

A weary-looking Johnson, sitting in a chair in an open-necked shirt, posted a video on Twitter from Downing Street.
“Although I’m feeling better and I’ve done my seven days of isolation, alas I still have one of the symptoms, a minor symptom, I still have a temperature,” he said.

“So in accordance with government advice, I must continue my self-isolation until that symptom itself goes,” he added.

Johnson announced a positive test result on March 27, the first leader of a major power to do so.

The state-run NHS announced on Friday that two nurses, Aimee O’Rourke, 39, and Areema Nasreen, 36, had died after testing positive for COVID-19.

England’s chief nurse Ruth May made an impassioned plea to the public to stay at home over the coming weekend, invoking the memories of the two nurses and describing them as remarkable women who were part of the NHS family.

“This weekend is going to be very warm and it will be very tempting to go out and enjoy those summer rays,” May said at a daily government news conference.

“But please, I ask you to remember Aimee and Areema. Please stay at home for them,” she said.

“STICK WITH IT”
Johnson initially adopted a relatively restrained approach to the outbreak compared with other European leaders but swiftly changed tack when projections showed a quarter of a million people could die in the United Kingdom.

He effectively shuttered the world’s fifth-largest economy, instructing people to stay at home and and ordering schools, non-essential shops and social venues to close.

“Please, please stick with the guidance now,” Johnson said in his video message.

England’s Deputy Chief Medical Officer Jonathan Van-Tam said that while the public’s compliance with the social distancing guidance had improved, it was too early to talk about “green shoots” in terms of hospital admissions of coronavirus patients.

Van-Tam said that results of clinical trials of possible drugs to treat COVID-19 were likely to come in a few months.

Health minister Matt Hancock said that so far, clinical trials had focused on repurposing existing drugs. Van-Tam said the next round of trials would look at other medicines including some that might be in development for other diseases but might be helpful in treating COVID-19.
Hancock tested positive last week at about the same time as Johnson, but he has since left isolation, disclosing that he had lost half a stone (3.18 kg) in weight due to the virus.

On Friday, he attended the opening of a huge new hospital erected in just nine days in a conference centre in London.